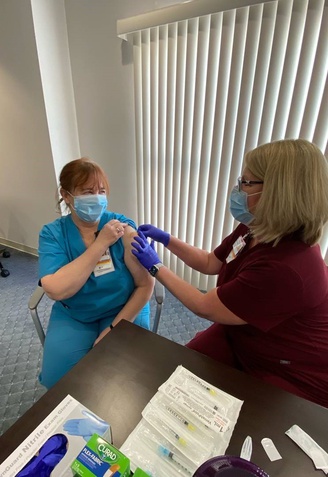 Sutter Coast Hospital nurses Jan Pearce and Melissa George were among the first in Del Norte County to get the COVID-19 vaccine. Photo courtesy of Sutter Health

Most medical offices aren’t ready to inoculate their patients, but Del Norters should still let them know if they want the COVID-19 vaccine.

Though the Del Norte County Public Health Branch is expected to hold an “invite” vaccination clinic on Thursday for those in the Phase 1a category, the county doesn’t have enough doses to open the clinic up to everyone, Dr. Warren Rehwaldt told the Wild Rivers Outpost on Monday.

“We asked primary care offices to create a list of people who are in the age categories,” he said. “We don’t have the vaccine to supply them all. All we asked people to do is call their provider if they’re in the age category 65 and above (and say), ‘When the time comes, I’d like to be on the list to consider to be vaccinated.’”

In Del Norte County, those in the 1a category include most healthcare workers, such as staff in hospitals, skilled nursing and assisted living facilities and dialysis centers. Providers of emergency medicine, as well as community health workers, in-home supportive services workers, public health staff and laboratory and specialty clinic workers are also in the 1 b category to be vaccinated, according to Del Norte County’s COVID-19 Information Hub.

Once Del Norte County moves into the phase 1b category, those who can get the vaccine include those who work in food and agriculture, education and childcare as well as emergency services. Those individuals are projected to receive the vaccine in early to mid February, according to the COVID-19 Information Hub.

As of Friday, Del Norte County has distributed 980 first and second doses of both the Pfizer and Moderna COVID-19 vaccines, according to the Public Health Branch.

Meanwhile, a roughly two-day hold on the Moderna vaccine disrupted Public Health staff’s plans to hold a vaccination clinic for those in the Phase 1a category on Saturday. That clinic has been rescheduled to Thursday, according to the Public Health Branch.

“Once that is done, we will have reached out to most of the people in 1a,” Rehwaldt said, adding that a few healthcare workers decided against receiving the shot. “Of the people who have decided to get vaccinated, we will probably (have vaccinated) 90 percent or more.”

Del Norte County’s vaccination efforts comes as the number of COVID-19 cases appears to be declining. Rehwaldt acknowledged this downward trend, saying the community could graduate to a less restrictive tier on California’s color-coded Blueprint for a Safer Economy if it continues.

Five new COVID-19 cases were reported to public health between Friday and Monday, according to Del Norte County's COVID-19 Information Hub. None were among the county’s incarcerated population.

Del Norte County has 17 active cases and zero hospitalizations from the novel coronavirus as of Monday, according to the Public Health Branch.

At Pelican Bay State Prison, seven inmates have active disease, according to the California Department of Corrections and Rehabilitation’s COVID-19 Tracking web page.

“It’s not just Del Norte,” Rehwaldt said. “I think we’re seeing a (general) slowing throughout the region, which is encouraging. The case counts at the prison have also dropped a bit.”

California has roughly 3.1 million active cases currently with 27,007 reported on Monday, according to COVID19.CA.GOV.

However, the California Department of Public Health ended a regional stay home order statewide since projected availability in intensive care units rose above 15 percent. Counties will return to their assigned tiers on the Blueprint for a Safer Economy.

For Del Norte County, that’s currently the most restrictive purple tier, which indicates widespread risk of COVID-19 in the community. As a result many non-essential businesses are closed, restaurants can only operate outdoors or offer take-out and delivery and retailers can only operate at 25 percent capacity, according to state guidelines.

According to Rehwaldt, for Del Norte County to move into the less restrictive, red tier on the Blueprint for a Safer Economy, it has to average less than two cases a day and sustain it for about two weeks.

“We maybe could do that, but we have to hold it for, I think, a two week period before they’ll allow us,” Rehwaldt said. “It’s a seven day average. If things don’t move back in a more active direction, we might reach that point, but it’s hard to say.”

Meanwhile, as Del Norte County moves into the next phase of vaccine distribution, public health staff are looking to inoculate those over 75 years old as well as high risk staff working in local schools either based on age or health conditions.

But there aren’t enough doses in Del Norte County to inoculate everyone who is able to get the COVID-19 vaccine based on the state’s guidelines, Rehwaldt said.

“There’s at least 4,000 people over 65 in Del Norte County,” he said. “We haven’t even been allocated half that amount and we probably have given out the majority of what we’ve been allowed.”

Both Pfizer and Moderna COVID-19 vaccines require a second dose to be effective.