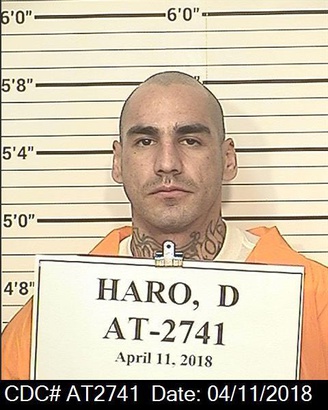 Officials are investigating Martin Aguilar's death as a homicide and say his cellmate, Daniel Haro, is a suspect, according to the California Department of Corrections and Rehabilitation.

From a CDCR news release:

CRESCENT CITY – Officials at Pelican Bay State Prison (PBSP) are investigating the death of inmate Martin Aguilar as a homicide.

Aguilar, 27, was found dead in his cell this morning and was pronounced deceased at 9:21 a.m.

Aguilar was received from San Diego County on April 19 2015, to serve eight years for assault with a deadly weapon and an enhancement for a street gang act in commission of a serious felony; two years for possession of a controlled substance for sale; and one year, four months for assault with any means likely to produce great bodily injury of a peace officer/firefighter. While incarcerated, Aguilar was sentenced in Imperial County in 2018 to serve two years for battery on a non-prisoner and in Del Norte County in 2019 to serve three years, four months for battery on a non-prisoner, a second-strike in-prison offense, and resisting/deterring an officer with threats/violence, a second-strike in-prison offence.

Daniel Haro, Aguilar’s cellmate, is the suspect in this case.

The Investigative Services Unit at PBSP is investigating. The Office of the Inspector General was notified.