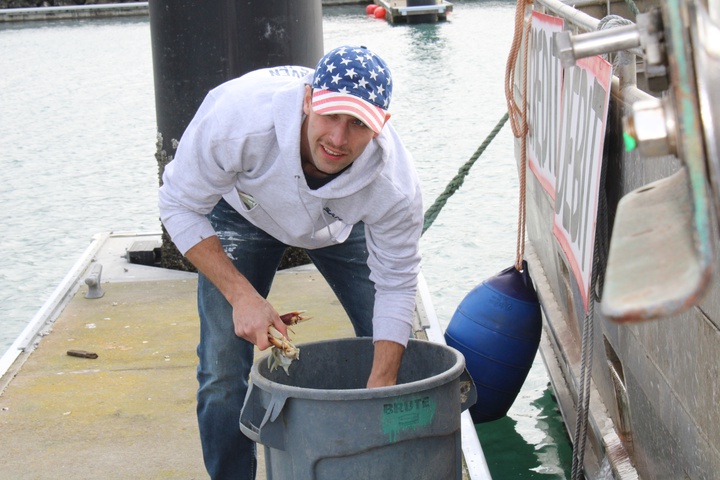 Hunter Vanderpool, of the Astoria, Oregon vessel the Ms. Sam, cleans fresh crab for a patron at the Crescent City Harbor on Thursday. Photo: Jessica Cejnar

Five days after crabbers pulled pots for the first time this season, the only crustaceans to be had at the Crescent City Harbor came from the FV Ms. Sam.

Placing a handwritten sign on U.S. 101, the crew of the Astoria, Oregon vessel provided fresh Dungeness crab right off their boat along with cooking tips for the InstaPot. Their goal, Matt Ditch told the Wild Rivers Outpost, was to make enough money to cover the cost of fuel.

“We’re just trying to sell enough crab to average out the season,” he said, estimating that he sold at most 150 crab. “We make more money on the dock than if we were out catching crab.”

Ditch has fished Crescent City for five years and says he has three crewmen he has to pay. After fishing an area of over 30 square miles, there’s just no crab, he said.

After a delay initially due to poor quality crab and later because of price negotiations with seafood processors, Del Norte County fishermen and others on the North Coast were able to pull their crab pots at 8 a.m. on Saturday.

But four hours into the season, when dock workers and fishermen should have been offloading the first of their catch, Citizens Dock was still quiet. Absent were the forklifts zipping back and forth with ice and crab-filled totes and the semis waiting to take them to markets in the Bay Area and elsewhere.

Last month, shortly after the California Department of Fish and Wildlife announced the season would open statewide on Dec. 23, Rick Shepherd, president of the Crescent City Commercial Fisherman’s Marketing Association, said crab fishermen would be in for a low volume year.

On Thursday, he said, the season is turning out worse than projected and the commercial fleet haven’t even been crabbing for a week.

“Even on years that had been a bottom of the cycle year have been quite a bit better,” Shepherd said. “I can’t even explain how bad this is.”

Since fishermen went to work, Pacific Choice Seafoods and other processors raised the price they were offering to $4 per pound, Shepherd told the Outpost.

Shepherd estimated that less than 5,000 pounds of crab have been delivered to Crescent City. He hasn’t even offloaded his own catch yet when in previous years he’d have to empty his vessel every day.

When asked for a potential explanation to the season’s dismal start so far, Shepherd said it’s too early to tell. His fellow fishermen are also trying to figure out why there's a lack of crab.

“Most of the pots are only averaging one crab to the pot if that,” he said. “Other people have 40 pots with 80 crab or something. Picture thousands of pots in the ocean, I don’t know. You could say all the pots in the ocean would average a crab, maybe one crab, and that doesn’t even break even for boats”

Back on Citizens Dock, Brian Benson, of LCZ Unloaders, said the outfit he works for offloaded a little crab, but he didn’t think it was a third of what fishermen brought to the dock last year. Referring to the pandemic, he said because residents aren't open the need for crab is probably less. That makes it bad for everyone too, Benson said.

Though it’s still early, Shepherd said he hopes some kind of disaster relief, whether related to the COVID-19 pandemic or not, will help fishermen and their crew. He said he’s been hearing horror stories up and down the coast, including in Brookings.