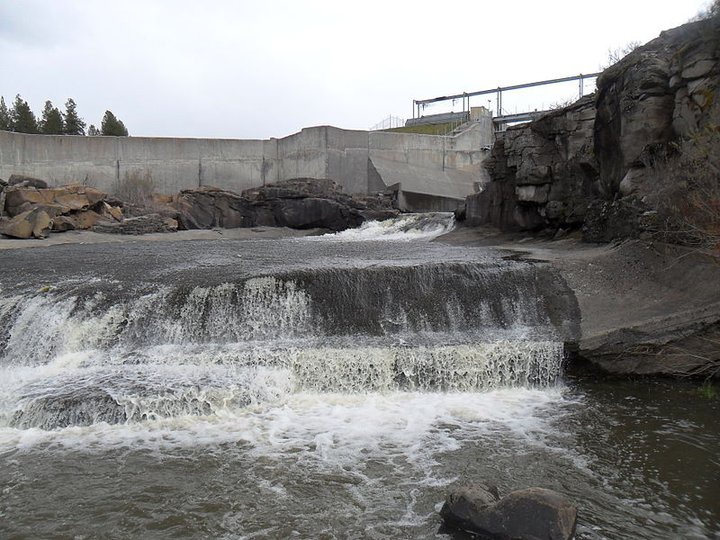 The Klamath River past the J.C. Boyle Dam, one of four Klamath hydroelectric dams owned by PacifiCorp, along with Iron Gate, Copco I and Copco II. | Wikimedia Commons.

Though the nonprofit tasked with Klamath River dam removal is about to submit its definite plan to federal regulators, Del Norte County and the Crescent City Harbor District are still worried about potential negative impacts.

Harbor commissioners on Thursday agreed to sign onto a memorandum of understanding that includes the county and the Klamath River Renewal Corporation.

The MOU contains conditions that ensures the harbor and county can recover potential damages to the port and the fishing industry that occur as a result of dam removal and reservoir drawdown on the Klamath River. The county and harbor district want the conditions placed in a definite plan KRRC submitted to the Federal Energy Regulatory Commission on Friday, according to County Counsel Joel Campbell.

“FERC is going to issue an order that allows them to remove the dams,” Campbell said, referring to KRRC. “We want them to have a condition on that order that says they have to do these things in this agreement. Until FERC orders that, they don’t have any obligation to do anything.”

The county negotiated the MOU with KRRC on Monday. It was submitted to the Del Norte County Board of Supervisors on Tuesday before being sent to the Crescent City Harbor District on Thursday.

“In the unlikely event that monitoring conducted pursuant to the MOU establishes a quantifiable impact from the surrender project to the harbor, then I have instructed the Director of the California Department of Fish and Wildlife to assist the harbor in any state permitting issues related to such impact,” Crowfoot wrote in his letter.

Created out of the 2016 Klamath River Hydroelectric Settlement Agreement, KRRC is tasked with removing the J.C. Boyle, Copco 1, Copco 2 and Iron Gate dams, which are owned by PacifiCorp.

KRRC has been going through the permitting and environment analysis portion of the dam removal project for the past several years. In addition to obtaining a 401 Clean Water Act certification from Oregon and California, KRRC has been working with FERC to transfer the license to operate the dams from PacifiCorp to themselves.

Meanwhile KRRC hired Kiewit as a contractor for dam removal in 2019 and late last month contracted with Resource Environmental Solutions, of Texas, to spearhead habitat restoration.

For about two years, harbor commissioners and county supervisors have raised concerns about release of sediment when the dams are dismantled and their potential deposit at the port’s entrance channel and marinas roughly 20 miles away from the Klamath River mouth.

These concerns persisted despite KRRC’s draft environmental impact report to the California State Water Resources Board in February 2019 stating that the level of silt and sediment that will wash downstream would be less than the river produces during a wet year.

In September 2019, Del Norte County filed a motion to intervene in FERC’s proceedings on the dam removal project citing a desire to protect public resources.

Under the most recent MOU, KRRC will be required to monitor and analyze sediment flow within the river using acoustic doppler current profilers mounted on buoys. Both KRRC, the county and harbor district would determine where those buoys are located.

Monitoring sediment flow will determine if it is moving north from the Klamath River mouth to the Crescent City Harbor, if sediment is being deposited in the harbor and, if so, how much is a result from dam removal and reservoir drawdown.

According to the MOU, an incremental increase in sediment of 25 percent will be used to determine the threshold volume.

If sediment damages the Roy Rook and Klamath townsite boat ramps, KRRC would pay the county $7,000 — $3,500 per boat ramp — per year for two years after the dams are removed and reservoirs drained, according to the MOU.

On Thursday, both commissioners Wes White and Rick Shepherd said they were concerned about the buoys.

Shepherd, president of the Crescent City Commercial Fisherman’s Marketing Association, said he was worried the potential that fishing gear would get tangled up in them and they would be a hazard to navigation.

“My understanding is there was very little involvement by the harbor and we were a party,” White said, though he complimented Campbell on the MOU. “I’m disappointed the county didn't involve the harbor more in their negotiations.”

As for dam removal, White said he didn’t agree with it.

“I don’t know that it will increase the salmon fishery at all,” he said. “My hope is it does and things go well.”

The discussion then turned to the Crescent City Harbor District’s ongoing difficulty regarding dredging, finding an offshore site to dispose of dredging material and working with the U.S. Army Corps of Engineers for a dredge permit.

Shepherd asked Campbell if the MOU would help expedite the permitting process for dredging.

Campbell said Crowfoot’s letter may help with that, though there are no promises. According to Campbell, the letter from Crowfoot to the Board of Supervisors stems in part with a relationship between District 3 Supervisor Chris Howard and CDFW Director Charles Bonham.

“I think the letter shows the state understands its responsibilities and we’re hoping that means they’re going to do the right thing,” Campbell said.

Harbor District Board President Brian Stone said he was concerned about the ecological impacts dam removal could bring. Despite assurances by KRRC that the amount of sediment washed downstream would be similar to that of a wet year, he asked about climate change and the possibility of a "catastrophic failure.”

“I’m just worried about the impact it’s going to have on our community,” Stone said. “One, it could impact the marine life over and above what is normal. We could stil in the harbor, which would cause a great deal of damage to our community. And, yes, we would have a resolution at the back end of suing somebody over it, but it costs the public a lot of money when you sue.”

Stone said he also worries about the harbor’s dredge permits with the Army Corps of Engineers and how to obtain an offshore disposal site for the dredge material.

“There are a lot of negatives I see and I don’t see much in the way of an upside other than the fact we’re going to put something into the record here,” he said.

Howard, who had been a wildlife and fisheries biologist, said he pushed the Board of Supervisors to “take a hard look” at dam removal because of potential impacts to Del Norte County’s economy and infrastructure. Impacts to salmonids and other biological resources in the river is also a concern, Howard said.

However, Howard noted, the state and FERC could hold KRRC to a higher standard than the county can. CDFW had assured county representatives that dam removal likely won't have a negative impact on the fishery in the Klamath River, he said.

“There are measures to monitor for that and if something were to occur, (KRRC) would answer to somebody bigger than us,” Howard said. “We have done everything we can as a county to protect our resources, not only in the harbor, the in-river infrastructure, boat ramps, etc. I wish there were something we could do to give further insurance around economic impacts.”