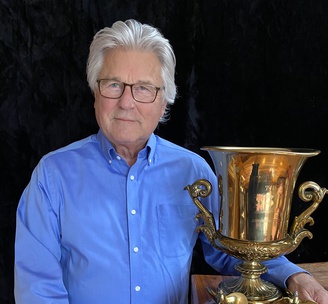 Charlie Helms received accolades from Crescent City Harbor commissioners Thursday and a promise to bid him farewell with a formal resolution next week as he moves on to another chapter in his life.

Before they sent him off, each commissioner thanked Helms for his service.

“I know I’ve been the longest one working with you,” Commissioner Wes White told Helms. “I appreciate the efforts you put in to better the harbor and you can leave knowing that the harbor’s a better place than when you walked through the door.”

Helms announced Thursday that he is considering submitting an application to fill the vacant seat on the Harbor District Board of Commissioners. That seat was vacated by Carol White earlier in February.

From a Thursday announcement:

“The award by the Harbor Masters Association was an amazing surprise,” Helms said. “To receive that kind of recognition and appreciation from your peers was a high point in my career and something that will always be special for me.”

During Helms tenure at the Crescent City Harbor District, he was able to get the District back in the black by expanding services, implementing operating efficiencies and attracting outside investment.

He led the Harbor District’s Green Efforts by bringing in the Renewable Energy Capital company to construct a passive solar energy system and build mass battery storage in a multi-stage, multi-year project to make the Harbor District energy independent.

When the project is finished, the District will be supplying all its electrical power needs through solar panels. The solar energy captured during the day will be stored in the battery storage facilities to provide round-the-clock power for the District. The entire project should be completed in 2024.

An important goal for Helms was finding ways to maximize revenue from developing the District’s land. One of the first steps in reaching this goal was negotiating a development and new lease agreement with existing tenant Englund Marine who was occupying a small, thirty-year old building on site. The family-owned marine supply company, based in Astoria, Oregon, agreed to build a multi-million-dollar modern facility on land leased from the District. The new Englund Marine retail store opened in 2016.

Helms worked to bring investment and developers to the Harbor District by hosting investor educational events and through one-on-one meetings with banks and private development companies.
Finally, in the Fall of 2020, following a broadly circulated Request for Proposals, one of the development companies with whom Helms had worked to build interest in the potential of the District, submitted a proposal.That proposal was approved by the District’s Board of Commissioners. Now, in partnership with the developer, the District is embarking on a series of projects to bring modern lodging, electric vehicle charging stations, new restaurants and tourist activities to the Crescent City Harbor.

Helms continually worked to create tourist revenue for the District.  He was responsible for building the District’s social media presence and getting the Harbor District onto travel review and travel-booking sites like TripAdvisor. From 2016 through 2019, the District consistently earned the coveted TripAdvisor Certificate of Excellence and in 2020 won the TripAdvisor Traveler’s Choice award.

Helms worked with the Del Note Local Transportation Commission who provided grant funding to lengthen the California Coastal Trail from Citizens Dock Road all the way to South Beach. He opened the District’s first gift and souvenir shop as another way to attract additional tourist visits to the harbor.

Prior to Helms arrival, two RV parks held long-term leases with the District. Helms negotiated an early buyout of the lease from the operators of one park and took over the management of the other upon expiration of their lease. Those actions significantly boosted District revenue plus gave the District freedom to improve both facilities.

Helms promoted the Harbor District through special events like the ‘Anchors Aweigh’ bi-state arts contest. Shortly after arriving at the District, Helms found 24 utility anchors that had been stored in crates in the Maintenance Shop for decades. Instead of selling them for scrap, he enlisted volunteer assistance from Pocketfish Design to create and market a unique special event.

Community artists and creative individuals from local schools, Humboldt State University and the College of the Redwoods were invited to turn utility anchors into pieces of art. Judges from the Crescent City Harbor Art Gallery selected the three most expressive anchor transformations and recognized their creator’s artistic achievement. To add to the visitor experience at the harbor, all the anchor art are permanently displayed throughout the District.

Because of his desire to see the Harbor District continue to progress and because of an unexpected opening on the Board of Harbor Commissioners, Helms is considering submitting an application to the Board to be considered as a candidate for the open Board of Commissioners spot.