DNUSD Offering No Salary Increase To Teachers, Citing the Need of a Loan to Pay Its Bills » 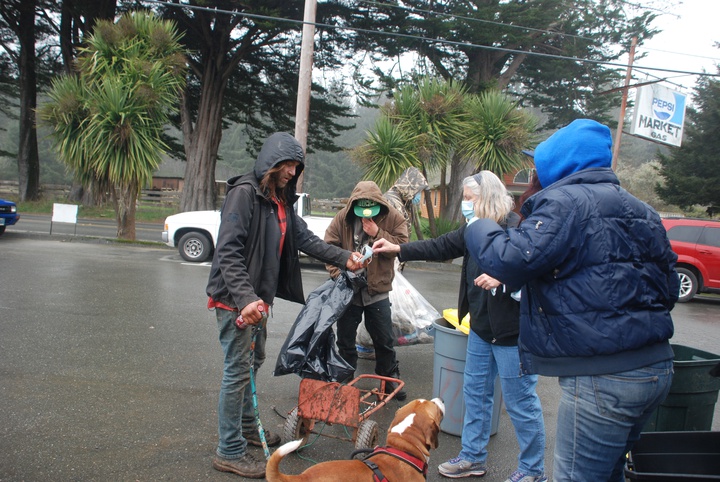 Anthony Hatfield distracted his pup Skipper long enough to put a handful of groceries in an already full backpack.

He still juggled a loaf of bread, a tarp and some dog food, but didn’t say no to whatever Daphne Cortese-Lambert and her volunteers at Del Norte Mission Possible offered.

“Anything I don’t use I’ll share with other people,” he said on a drizzly Thursday afternoon outside the Park City Superette.

The little market at the corner of Elk Valley and Howland Hill roads near Crescent City was the final stop of the day for DNMP’s new Winter Shelter-in-Place Project. For the past four weeks, volunteers have reached out to roughly 215 people, providing tarps, raincoats, food and garbage bags.

Nearly everyone DNMP volunteers reach out to live in one of the four major homeless camps in the area, according to Cortese-Lambert. The trash bags provide a means and incentive for them to keep their campsites clean. Full bags are taken to the Del Norte County Transfer Center where the Solid Waste Management Authority waives the dump fees, she said.

“They were so excited about being able to have garbage bags and clean up their camps,” Cortese-Lambert said. “I add incentives for people (too). If they bring me garbage bags four weeks straight, I’ll add something special that I give them.”

On Thursday, two people dropped off garbage bags full of trash, Cortese-Lambert said if they continue for four weeks, she’d add a charger device that also serves as a heater to keep them warm.
“That makes me smile,” she told them, taking the bag.

Cortese-Lambert kicked off the Winter Shelter-in-Place program in January, about the time the Del Norte County Department of Health and Human Services takes part in the Point in Time Count. The count aims to collect data for the U.S. Department of Housing and Urban Development on what it’s like to be homeless locally. That data is used to pursue grants and other resources.

In previous years, DHHS staff and other community organizations gather at the Veterans Memorial Hall and seek out homeless individuals in known camps, according to DHHS Director Heather Snow. This year, because of the COVID-19 pandemic, staff conducted a count of sheltered homeless individuals, those at an emergency shelter, in a motel or hotel, recovery home or domestic violence shelter, she said.

“This sheltered PIT and Housing Inventory Count (HIC) will be for the night of Jan. 25, 2021,” Snow wrote in an email. “We are working with our local partners to obtain as comprehensive a count as possible under these unique circumstances and hope to evaluate the data through our Coordinated Entry System to understand any changes in our unsheltered population.”

DHSS submitted that data collected from this year’s count to HUD by midnight Feb. 1, according to Snow.

Snow noted that many of her staff who would have helped reach the unsheltered homeless population, have been doing contact tracing and case investigation for several months as a result of the pandemic.

Because the count only includes those who have found some sort of shelter, Cortese-Lambert suspects the overall homeless population count for Del Norte County will be low. She said she started the Winter Shelter-in-Place program in part to reach those on the southern edge of Crescent City who, she believes, aren’t being counted.

“I’m really looking forward to the Winter Shelter-in-Place program being able to be a bridge to services and also to get a more accurate count next year,” Cortese-Lambert said, adding that she is beginning to enlist the help of those who are homeless to “shelter in place in their camps.” “I’ve been forming homeless ambassadors who are people, spokesman, for the larger camps in Crescent City. I’m asking, ‘What do you guys need to survive and where is a safe place by the major camps where I can go and distribute those things to you?’”

Cortese-Lambert pitched her idea to, and received roughly $22,300 from, the Wild Rivers Community Foundation and Humboldt Area Foundation. She also received an extra $313 in private donations for the program. Fifty people showed up in the pouring rain the first week without any advertising, proving to Cortese-Lambert that the need is great.

In addition to handing out rain gear, first aid kits and food, Cortese-Lambert is also giving people masks, hand sanitizer and other PPE, though, she said, COVID-19 isn’t much of a worry among those in the camps.

“They’re trying to survive the night and not freeze to death,” she said. “COVID is not that scary to them.”

Cortese-Lambert also gets people to register in the Homeless Management Information System, a program used by the NorCal Continuum of Care, which includes Del Norte County. Her goal is to register three to four people a week in the HMIS system.

In addition to the private donations, the program received, Cortese-Lambert is asking for donations of bandaids, Neosporin, weather-proof socks and toe and hand warmers, which are lifesavers, she said.

“This is a bunch of people in our community that just hasn’t been reached,” she said. “And I’m so excited about being able to do that.”

Hatfield applauded Cortese-Lambert, her volunteers and the owners of Park City Superette on Thursday, noting that many who are homeless have been forced to one end of town.

"They make a lot of effort to help everyone who are down," he said.