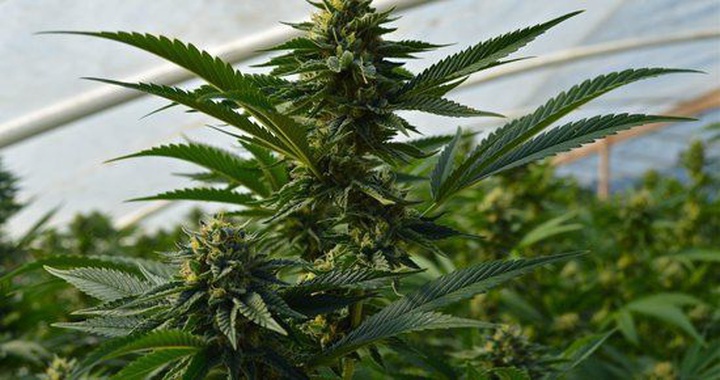 After a motion to reduce the cannabis tax rate for retailers failed, the owner of the only business that pays those taxes in Del Norte County demanded county supervisors dedicate those dollars for disadvantaged youth or he would “quit.”

Robert Derego is the only cannabis retailer in the county’s jurisdiction. His dispensary, Sticky Grove, is taxed annually at a rate of 6 percent due to Measure B, which voters approved in 2018. In the last four quarters, Derego’s business generated $60,000 in tax revenue for the county, said Tax Collector-Treasurer Barbara M. Lopez.

On Tuesday, after District 2 Supervisor Valerie Starkey said she felt the 6 percent tax rate was excessive, Derego said he didn’t mind paying it so long as those dollars were used to support the community’s youth.

But when Starkey’s motion to reduce the rate to 2 percent failed by a 2-3 vote, Derego doubled down on his request.

“You guys need to dedicate the funds to disadvantaged youth programs or else you will not have the funds next year,” he said. “You understand that? You’re used to extorting people. If you want $60,000 next year, it will be dedicated to youth groups.”

Supervisors Gerry Hemmingsen, Bob Berkowitz and Darrin Short voted against the proposal to reduce the cannabis tax rate to 2 percent.

Hemmingsen’s motion to keep the cannabis tax rate at 6 percent for retailers passed by a 3-2 vote with Starkey and Board Chairman Chris Howard dissenting.

Measure B, the Del Norte County Cannabis Tax Ordinance, imposes a 2-6 percent tax on the gross receipts of adult-use cannabis retailers and a 1-3 percent tax on cannabis manufacturers in the county, according to Lopez. The Board of Supervisors sets those rates annually. The revenue goes into the county’s general fund, Lopez said.

According to Lopez, the county has taxed cannabis retailers at 6 percent since the Cannabis Tax Ordinance went into effect. If that rate was decreased to 2 percent, the county would see roughly $19,900 in revenue, she said.

In response to Starkey’s questions, Lopez said the county doesn’t have a tax against alcohol establishments and the city did not adopt a tax rate for cannabis retailers or manufacturers.

According to Starkey, who spoke with City Manager Eric Wier, the Crescent City Council chose not to set a tax rate when they developed their commercial cannabis ordinance because they didn’t want to create obstacles to doing business within city limits.

Starkey also proposed keeping cannabis tax rate for manufacturers at 3 percent noting that wouldn’t have an impact on any businesses yet.

“My proposal is we do something less than that 6 percent to see if we can’t assist a businesses with being successful here in the county,” she said.

Derego, who was on the county committee that developed its commercial cannabis ordinance supervisors approved in 2018, said he and his wife work 80 hours a week and expect to clear about $40,000. He pointed out that he offered a 20 percent discount to online sales during the COVID-19 pandemic and he competes with dispensaries in Oregon and within the Crescent City limits.

When Measure B was on the ballot in 2018, according to Derego, supervisors decided to have those dollars go straight into the county’s general fund rather than have it dedicated for a specific purpose so it only need 50 percent plus 1 of the vote to pass.

Derego said he’d like to see a proposal to dedicate the cannabis retail tax dollars toward a specific program by the Board of Supervisors’ next meeting in January.

County Counsel Joel Campbell-Blair said the Board of Supervisors can dedicate those Measure B dollars toward something specific, but it wouldn’t be permanent.

Following the meeting, Derego told the Wild Rivers Outpost that he was serious about closing up shop if the Board of Supervisors either decides not to dedicate his tax dollars toward a program for disadvantaged youth.

"Our lease is up in February and our license is up in April," he told the Outpost on Wednesday. "For me, the idea of growth stopped the moment (cannabis) got regulated, and after awhile we did OK because we were the only ones in town."

According to Derego, when he on the Cannabis Working Group developing the county's commercial cannabis ordinance, county counsel advised adding a tax, saying county supevisors would be more willing to approve the ordinance.

On Tuesday, Howard acknowledged Starkey’s sentiments and Derego’s request, saying that “there’s some truth” to Starkey’s assertion that a 6 percent tax on cannabis retailers is a barrier to business.

In 2019, after finding that the ordinance accidentally established a monopoly in the urban area just outside the Crescent City limits, supervisors modified the ordinance to allow new commercial cannabis operations in the Smith River area.

In January, supervisors approved a a permit for a commercial cannabis cultivation and manufacturing operation, Moving North LLC, at 205 Timber Boulevard, the old Triplicate printing plant.