Boice’s call for action against these programs comes a day before the application deadline for the Behavioral Health Resource Network grant. The grant, in accordance with Ballot Measure 110, provides funding for entities like nonprofits through Oregon Senate Bill 755 to create a network of health and social services throughout the state.

A memo from Boice attached to today’s agenda packet:

As I understand, that money would cover 'harm reduction' as the initial step in dealing with addictions and mental illnesses. In a few other states, and I expect in Oregon, 'harm reduction' means offering 'needle-exchange programs' and 'safe injection sites.’ I believe we need to be cautious as some organizations might wish to offer those or similar services if they were to apply for and receive government funding. I believe Curry County may wish to consider an ordinance that prohibits drug addiction enablement programs within our county. If we don't, then as it stands now, I would likely support a ballot measure to address the continuing threat (by using state and federal government funds) pushing against those actions that would actually make drug and other addictions easier in our county. 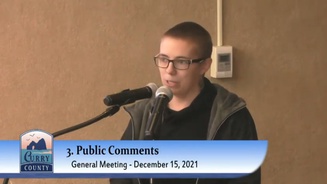 Diana Cooper addresses the Board of Commissioners.

“Harm reduction for us means that we’re connecting people to resources — making sure they’re not using dirty syringes,” Cooper said. “People are going to inject drugs. That’s probably not ever going to stop in the same way that people probably are not going to stop drinking. The idea is there’s three ways to reduce harm: You can stop the behavior, meaning zero tolerance, you can help people reduce the behavior, or reduce the harm that’s caused by the behavior. What we’re trying to do is reduce the harm.”

While Boice praised the goals developed by the Oregon Health Authority in accordance with Measure 110 to address substance abuse across the state, he added that OHA didn’t mention anything about offering needle exchange programs.

“I could be wrong, but I don't recall the citizens voting on programs, anything for example, regarding needle exchanges,” he said at today’s meeting. “None of these [goals outlined by the OHA] suggest the referent drug addiction enablement programs, which people believe have often been the results enabling additional substance abuse. That can be debated. I understand. I’m not the expert to do that, but I do have great concern as a citizen.”

Measure 110, however, does state that an Oversight and Accountability Council be established to provide grants to existing agencies or organizations — government or community-based — to increase access to addiction recovery and harm reduction services including, but not limited to, overdose prevention education, access to naloxone hydrochloride (a drug used to treat opioid overdose) and sterile syringes, and stimulant-specific drug education and outreach. These sentiments are echoed in SB 755 — which dictates how these services will be implemented throughout the state.

Cooper added at today’s meeting that needle exchange, overdose prevention and HIV testing programs have been offered by HIV Alliance in Curry County since 2016 and that she doesn’t anticipate grant funding for these resources causing an uptick in opioid addiction.

“The purpose of this program is not to be putting needles out into the world, it's actually [to] get needles back,” Cooper said. “These programs have been known to reduce needle sticks for law enforcement personnel. IV Drug use accounts for more than 60 percent of new hepatitis cases every year in Oregon. So what we’re doing is essentially providing public health by making sure that people have access to clean supplies and that we’re taking their old supplies.”

Expressing his own personal frustrations with the opioid epidemic, Commissioner John Herzog was brought to tears during today’s meeting while discussing his son’s drug addiction.

“Managing it does not work on a meth addict,” he said. “Praise the lord he is actually going to seek recovery [when he is released from prison]. He’s got to change. It’s up to him. His mom and I, we’ve tried.”

“I don't anticipate us not getting this,” Cooper said. “I think that we’ll probably get the full amount and then some. Within the wording itself, they’ve stated that counties with less services will be awarded more money.”

Following today’s discussion, Brookings CORE Response and HIV Alliance hope to give a more thorough presentation about the services they provide at next month’s Board of Commissioners meeting.