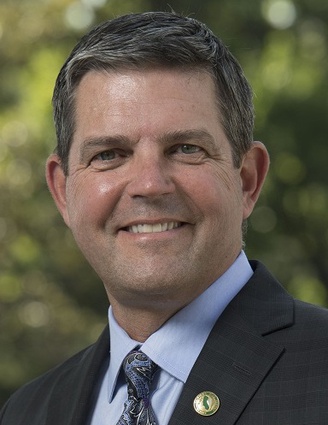 Del Norte’s representative in the state assembly dwelt on a new middle-mile initiative to expand broadband access in rural areas, though none of the 18 initial projects are in his district.

“The idea of the middle-mile is that this is often the most expensive piece of the puzzle to build,” Wood told supervisors, comparing the network to blood vessels. “The focus of this is the middle-mile itself. We believe that eliminating that huge cost will make it much easier for some of the implementation at the local level — what we call the last mile, which is getting into people’s homes and businesses.”

In November, Newsom identified 18 middle-mile projects in several areas of the state, however they did not include Del Norte County or any communities in Wood’s Assembly district. Wood said he hoped to get more information about the projects at a Middle-Mile Initiative Advisory Committee on Wednesday. Both he and State Sen. Mike McGuire sit on that committee.

“You can say North Coast and rural communities are well represented,” Wood told supervisors, adding that money will have to be spent in four years. “We’re dogged in our determination to make sure that we get our fair share and we also get our fair share of technical assistance to move things forward.”

During his presentation, Wood said while he introduced 19 bills at the beginning of the year, he narrowed them down to 14. Of those 14, Newsom signed eight into law, Wood said.

One of those bills, AB 1311, the California Beverage Container Recycling and Litter Reduction Act, came about because there were no certified redemption centers in Humboldt, Trinity, Sierra or Alpine counties, Wood said.

The buy-back center in Del Norte County also felt the impact of those closures since Humboldt County residents traveled north to redeem their bottles and cans, Wood said.

Hambro WSG, which operates Crescent City’s buy back center, plans to open a redemption facility in Arcata, though that has been delayed. Wood said he’s hopeful the facility will open by next spring.

“The original California Beverage Recycling and Litter Reduction Act, we just call it the Bottle Bill for lack of a better phrase, has never provided flexibility to communities struggling to try to make the entire CRV redemption centers viable,” he said, adding that he worked closely with the Humboldt Waste Management Authority to get more flexibility. “We often felt like David fighting Goliath even though we were asking for modest changes like modifying the hours of operation.”

The new California Beverage Recycling and Litter Act allows recycling centers to operate on an alternative schedule, by appointment and lifts daily load limits for people who have accumulated a lot of bottles and cans.

Another bill Wood mentioned to Del Norte County supervisors, AB 9, was signed into law in September. This bill creates a new branch within the Office of the State Fire Marshall that focuses on prevention and mitigation efforts, Wood said.

The bill moves eight existing programs and duties within Calfire to the Office of the State Fire Marshall and requires that its leaders be the “lowest priority workforce that might be asked to respond to wildfire missions,” Wood said.

“Every year as we work on these prevention efforts and as the fire season creeps up, those people working on them often get pulled away to fight fires and our work stalls and our problem continues to get bigger,” he said. "Only by changing this to getting these activities to be year-round and making sure the folks that are doing them are not going to be pulled away, hopefully we're going to change the tide as we move forward.”

As for healthcare, Wood said he would continue to look at ways to improve MediCal next year and is also working mental health challenges. He also continues working to "contain healthcare costs” and pointed out that the Office of Healthcare Affordability, which Wood proposed early in 2021, is critical to that endeavor.