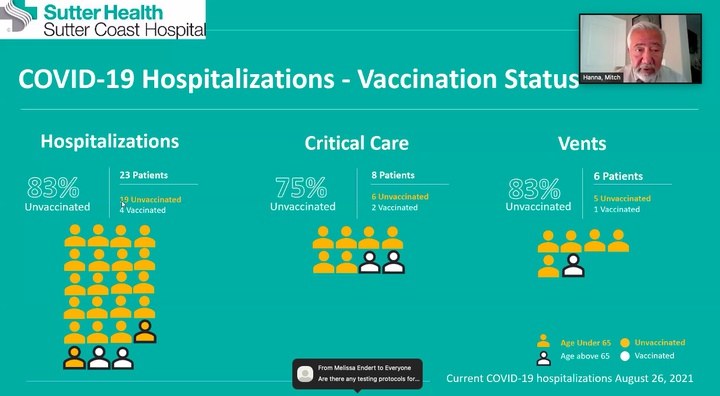 Sutter Coast Hospital CEO Mitch Hanna shared a slide showing that most people at the hospital with COVID-19 are unvaccinated.

Though he pointed out many businesses have closed because their staff became sick or have had to quarantine, Crescent City Manager Eric Wier mentioned one by name — Wier’s Mortuary.

Wier’s plea to Del Norte County came during a community meeting on the same day that Del Norte County saw two more deaths due to COVID-19 on Thursday.  Seventy-two new cases were identified in the county on Thursday and 22 people have been admitted at Sutter Coast Hospital with COVID-19.

The surge has gotten so bad that Del Norte County’s Public Health Officer, Dr. Aaron Stutz issued an order mandating masking in workplaces and public settings regardless of vaccine status.

The state is also finalizing a plan that ensures air ambulances are available to transport patients from Del Norte County to other Northern California hospitals in anticipation of a peak in the COVID-19 surge that’s expected in the next two to four weeks, McGuire said.

“That’s the last thing we want to do, but I want to be candid: Desperate times cause for desperate measures,” he said. “The No. 1 priority is patient care. If we can’t deliver care here in the county due to the hospital being full, we will give patients care in other parts of Northern California.”

McGuire held the first of a series of community briefings on the COVID-19 surge in Del Norte County that will be held at 6 p.m. Thursdays during the next two weeks. That meeting followed a special meeting of the Del Norte County Board of Supervisors, who discussed Dr. Aaron Stutz’s mask mandate.

“This was a decision I took and have been developing over the last week in response to a number of people in the community contacting me and requesting that we have a masking mandate in our county,” Stutz told county supervisors at a special meeting Thursday, adding that he also spoke with public health officers in other counties experiencing increases in cases. “I didn’t take this decision lightly and I would also point out that of the many questions submitted to our town hall meeting that’s supposed to happen in about 45 minutes, every single comment was, ‘Why don’t we have a mask mandate?’ There wasn’t a single person who said we shouldn’t have one.”

There are currently 329 active COVID-19 cases in Del Norte County, the Public Health Branch reported Thursday. Among the 72 new cases reported, two are among the incarcerated population.

The death count in Del Norte County related to COVID-19 is at 20 as of Thursday, according to the Public Health Branch. McGuire pointed out that 10 people in the last week have died from COVID-19.

“Our heart goes out to those who lost a family member, who has a family member in the hospital,” he said. “All of us are so sorry. I promise you that we are all working together to be able to control this crisis.”

In a letter to the community following his masking order, Stutz said he also strongly recommends all residents get the COVID-19 vaccine and, for those who are high-risk, consider wearing a mask and social distancing around people who don’t live in the same household. He also recommended twice-weekly testing in addition to the COVID-19 vaccine for emergency medical technicians, paramedics and in-home healthcare providers.

During Thursday’s Board of Supervisors meeting, when asked what the California Department of Public Health’s stance was, Stutz said he thought it was part of a broader approach that emphasizes local control and local response instead of issuing statewide orders.

A state team is helping with vaccinations, testing and administering monoclonal antibody therapy at Sutter Coast Hospital, however, Stutz said.

“We’re one of the only counties that has that right now,” he said. “All eyes are focused on us and some of these other counties that are having these outbreaks, trying to let us react more locally.”

According to McGuire, the state has sent two waves of additional staff to Del Norte County and Sutter Coast Hospital over the last two weeks. That first set of staff members helped with expanded treatment, testing and vaccine sites.

On Thursday, Sutter Coast Hospital CEO Mitch Hanna joined McGuire and other officials to discuss the state of the hospital. He noted that there are currently 36 patients at a time when the hospital would normally have 20 to 25.

Eight out of nine intensive care unit beds are occupied, Hanna said, while the hospital has modified other areas, such as its acute-rehab unit and anesthesia care unit to accommodate more in-patients as a result of the COVID-19 surge.

At the special meeting prior to the community town-hall, Board Chairman Chris Howard pointed out that masking orders were effective at keeping cases down early in the pandemic. At the town hall meeting, Howard said the community was lucky to have resources at the county level, at Sutter Coast Hospital and from the state.

However, he said, it’s only through diligence and vigilance that the community will get through the current public health crisis.

“I want folks to realize, we have lived through this in the last year and a half and we’ve done quite well in curbing, not only deaths in the community, but infection rates,” Howard said. “But we relaxed and it’s not a time to relax any further. It’s time to move forward and follow public health advisories and allow ourselves time to come to grips with the reality that we must protect our family members. We must protect our neighbors and we must protect our friends in this community.”

Crescent City Mayor Pro Tem Blake Inscore said he spoke with someone when the surge began who referred to the fable of the Boy Who Cried Wolf, asking why people should believe health experts now.

“The wolf is here,” he said. “The mortuary is full of our friends and neighbors — people who have lost their lives. There is no where in the Western U.S. that has seen a surge at the levels of what we’re seeing right here. Those are facts. We need to do our part.”