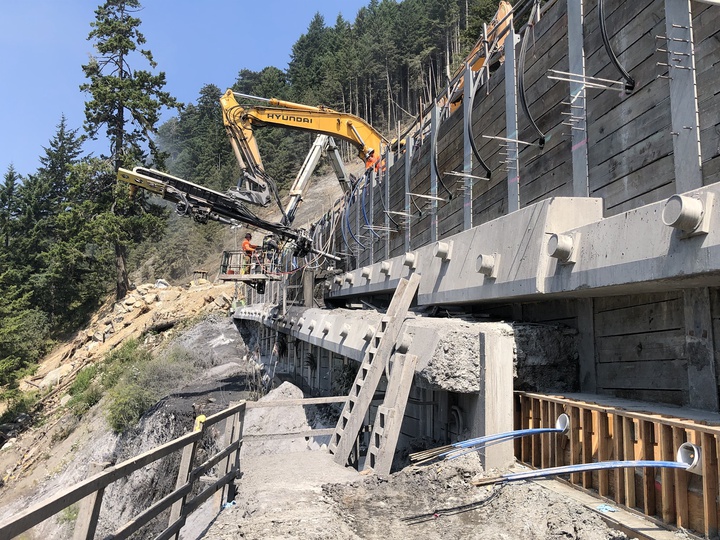 Caltrans has worked since February trying to stabilize the hillside above U.S. 101 at Last Chance Grade. Photo courtesy of Caltrans District 1.

Saying it has met its goal at Last Chance Grade, Caltrans says the four-hour closures on U.S. 101 are at an end.

Four-hours closures are officially over at Last Chance Grade on U.S. 101 south of Crescent City, following a response to a massive slide that has hampered the coastal stretch of roadway for most of this year. Motorists should now anticipate up to 30-minute delays in the area at all hours.

As one-way traffic control continues crews will put the final touches in the slope area through September, installing some remaining anchored drapery, K-Rail, and fencing. Because recent helicopter operations were successful, we do not anticipate any two-hour closures next month.
Crews will also continue adjacent retaining wall work in the area until next fall when it’s possible two-way traffic will resume for the first time since 2014.
24-7 monitoring of the slide will continue, and safety remains our top priority.
We are appreciative of the sacrifices made by crews, our partners, and the public to complete slide-response closures in time for the start of the school year. An accelerated work schedule at Last Chance Grade this summer allowed for the end of four-hour closures now rather than November. Thank you!

To read up on more facts about our efforts to build a long-term solution for this slide-prone area visit lastchancegrade.com