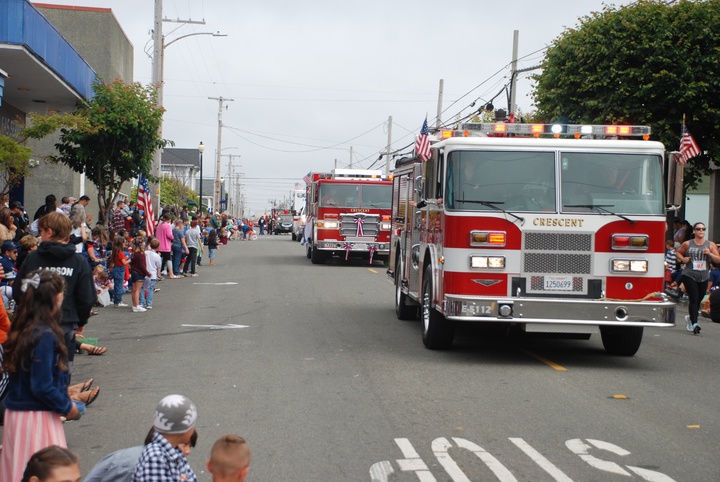 Property owners within the Crescent Fire Protection District will see ballots in the mail as soon as this weekend for a tax assessment officials say is necessary to keep the department operating at its current level of service.

This is the fire district’s second attempt at passing a benefit assessment, Chief Bill Gillespie told the Wild Rivers Outpost on Thursday. An October effort to get voters to approve a $74 property tax assessment failed by about 23 votes, he said. That effort, and the current one, is intended replace an $18 assessment for the Crescent Fire Protection District that sunsets at the end of the year, Gillespie said.

“A lot of the times folks think, ‘Oh, it’s a volunteer fire department, there’s no cost,’” he said. “If the funding measure isn’t successful, the fire district has enough money to make it about two years to operate. After that, the funding just isn’t there to be able to provide a solid level of service.”

Property owners with in the fire protection districts will see their ballots in the mail as soon as this weekend. The deadline to submit them is at the close of a regular board meeting June 14. They’ll be counted after that meeting, Gillespie said.

If approved, a single-family residential property within the fire protection district would be assessed $74, according to Gillespie. That amount would be added to a $24 assessment that’s been in place since 1987 and would replace the $18 assessment when it expires. This means a total of $98 for a single-family residential home would go toward the Crescent Fire Protection District each year, Gillespie said.

What’s different from the previous effort, however, is the fire protection district decided to cap the per-parcel assessment fee at $1,000, Gillespie said. This will be applied to large commercial complexes as well as residential properties that house multiple units, he said.

“After hearing from some of our community members, the fire district chose to levy a $1,000 per-parcel maximum cap,” Gillespie said. “Say it’s a commercial property… if you didn’t have the cap, they might be paying $1,500 or more. It goes to any property if there’s enough units on it or there’s enough built-up space.”

Coming off a 2020 that saw its firefighters responding to 2,057 calls for service, the Crescent Fire Protection District is one of the busiest volunteer departments in the state, Gillespie said. Its volunteers go to structure and wild land fires, rescues and extrications, and emergency medical calls.

Yet even with the two current assessments, the Fire Protection District has had to dip into its reserves annually for a number of years to ensure its budget is balanced, Gillespie said.

Expenses include fuel and insurance costs for its fire engines, in addition to maintenance. The department has to keep its firefighters equipped with personal protective equipment, which must be replaced every 10 years, he said.

Then there’s necessary maintenance of the fire district’s facilities, Gillespie said. For example, the main fire station at 255 W. Washington Boulevard will need a new roof soon, he said.

“When we look at fire apparatus — fire engines and those type of vehicles — that last assessment in 2006, a big piece went through to replace a fire engine, a rescue unit and a water tender that hauls a larger load of water to a fire scene,” Gillespie said. “We’re coming up at this point this year where that was 15 years ago. Typically, with fire apparatus, 20-25 years is what’s considered a lifespan. We don’t have plans immediately to do replacement, but there will come a time where we’ll have to start replacing those units.”

According to Gillespie, if voters approve the current assessment, it will help the Fire Protection District realize a 10-year master plan that includes incorporating three paid captains to oversee a volunteer “sleeper crew” of firefighters. The master plan also calls for additional training and the ability to set aside money to replace aging vehicles, apparatus and equipment.

“An ISO rating of one is the highest you can get, like the Los Angeles City Fire Department or the Seattle Fire Department — the really big places,” he said. “For us to maintain a four with our volunteer fire department is pretty incredible.”

If the fire department can’t maintain its equipment or make sure its personnel has the required training, that ISO rating could slip to a five or worse, Gillespie said. This could impact people’s insurance costs, he said.

“If it slips and goes to a six, some of the insurance companies, especially in California with the wildfire losses they’ve suffered, won’t underwrite insurance at a level six,” he said. “We see it as vital to be able to maintain or improve the service we provide.”
When asked about the previous property tax assessment, Battalion

Chief Ray Rook said it was competing with other tax measures during the general election cycle. He also noted that several firefighters were battling the Slater Fire during the campaign effort.
This time around, Rook said, many volunteers are trying to introduce the community to their volunteer fire department.

If the current tax assessment effort isn’t successful, Rook said there will have to be budget cuts, which could impact service, but he’s not sure what that will look like.

“I think it’s going to be tough to tell a volunteer that they can’t help the community because they don’t have money,” he said.

According to Gillespie, the Crescent Fire Protection District will hold informational meetings on the current property tax assessment effort at 5 p.m. May 12 and 11:30 a.m. May 18. Those meeting swill be available via Zoom and people will be able to ask questions, he said.

Residents can also call the Crescent Fire Protection District at (707) 464-2421 or email ccfire@crescentcity.org if they have questions.

“Of course they can pop in at the office and we’d be more than happy to talk to them,” he said.