The Rails Donate Another 35 Musical Instruments, Mouthpieces and Mutes to Del Norte Schools 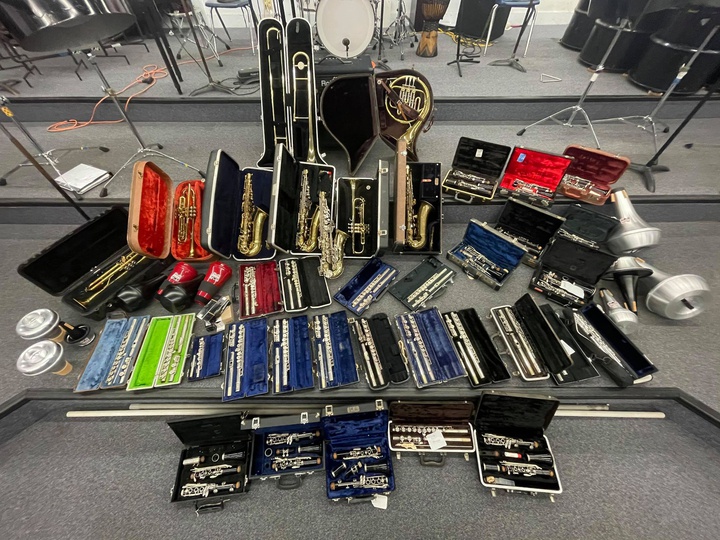 Nick Rail and his wife, Lisa, have made further donations since their initial gift of 100 musical instruments to Del Norte schools more than a year ago, but the latest is one of the larger ones, Del Norte High School Band Director, Dan Sedgwick, says.

Nick Rail, who attended Redwood School and went on to become a successful music retailer, donated 35 musical instruments as well as various mutes for brass instruments and mouthpieces for woodwinds to Del Norte County Unified School District, Sedgwick said Thursday. He estimated the donation’s to be at least $20,000.
The mutes and mouthpieces were a donation from the Dansr Company facilitated through Rail, Sedgwick said.

“There’s a lot of stuff — some basic clarinets, saxophones, trombones, a French horn,” Sedgwick said. “This is one of the larger (donations) and we wanted to make sure people knew about it.”

In addition to continuing to donate musical instruments to Del Norte County schools, the Rails pledged $1 million in seed money for a new performing arts center and promised to work with the Wild Rivers Community Foundation on a fundraising campaign to get the project started.

According to Sedgwick, though the cause for the performing arts center is in a “slight holding pattern” because of COVID-19, a website will go live soon to begin taking donations. Rail will also hire people to reach out to donors from out of the area, Sedgwick said.

The Nick and Lisa Rail Fund has also paid for stage lighting at the Crescent Elk Auditorium and has established a musical repair shop at DNHS.

“We want to thank him again publicly for all the support he has for our program,” Sedgwick said. “We’re excited about the possibilities going forward.”