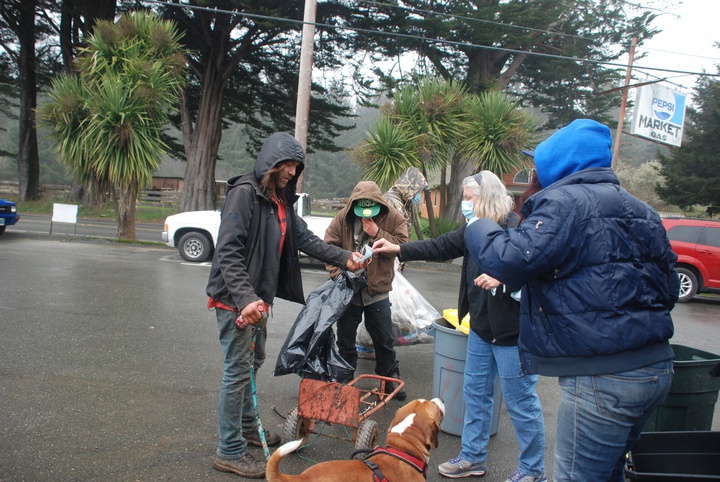 Del Norte Mission Possible accepts bags of trash from those living in homeless encampments in exchange for tarps, food and other supplies. File photo: Jessica Cejnar

The second involves Del Norte Mission Possible and its Winter Shelter In Place Program, which seeks to provide supplies, referrals for services and garbage collections for those living in encampments. DNMP seeks to use a city-owned access road near the cemetery on Cooper Avenue to distribute supplies.

“Two weeks (ago) Del Norte Mission Possible reported they served 54 individuals and that the ‘unhoused brought in 1,960 pounds of garbage to be taken to the transfer station,’” the city’s staff report states. “This past week they reported 3,120 pounds of garbage was collected and disposed of.”

City-owned property is part of the “complaint area” that Griffin and CCPD have responded to, according to the staff report. Griffin and other officers visited the area, spoke to residents who showed them the “problem area.”

“Initially observed were several environmental and Fish and Game Code violations that ranged from misdemeanor to felony violations,” the staff report states. “Upon further investigation, the main area of this initial complaint, which begins at the culvert on Harding Avenue and goes down to the north end of the cemetery property, turned out to be private property.”

According to the staff report, CCPD will urge residents and property owners to post proper signs and make sure trespassing letters are on file for enforcement purposes. CCPD plans to respond to calls for services and collaborate with residents on an area cleanup.

The city-owned property meets the criteria for a protected water system, according to the staff report. CCPD will have an “education-first” approach to deal with transients in the area, according to the report.

Other items on the City Council’s agenda for Monday include a request from Lighthouse Repertory Theatre to store costumes, props, sets and equipment at the Crescent City Cultural Center. Councilors will also consider a request from the Del Norte County Republican Central Committee to plant a memorial tree in an empty tree well at 3rd and I streets.