« 'We're Going to Be Southern California Before We Know It'; Mayor Pro Tem Balks At Extending Beach Fire Ban Area 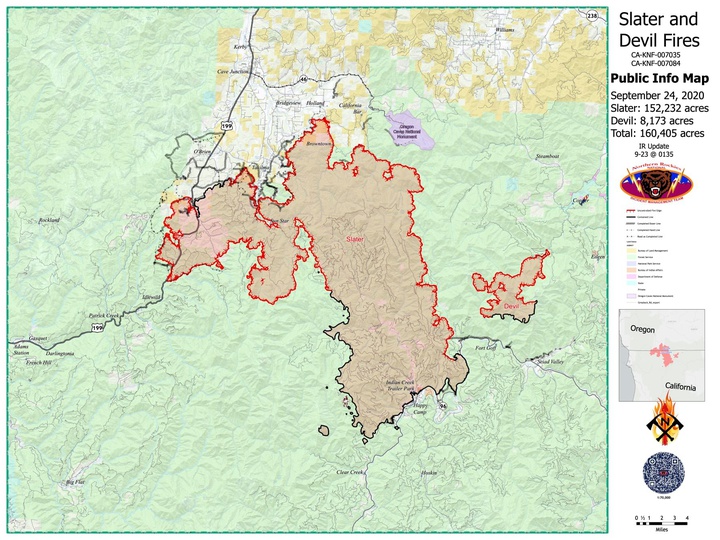 Evacuation orders remain for Gasquet and Big Flat due to the weather forecast as crews continue to battle the Slater Fire.

This decision was made after representatives with sheriff’s office, Del Norte Office of Emergency Services and Six Rivers National Forest met with the Northern Rockies Incident Management Team 2 to discuss current fire conditions.

In the Slater Fire’s north zone, crews building containment lines between Knopki Creek and Sanger Lake, according to the update. They are working to keep the fire from spreading.

Near Monkey Ridge, the fire came up to dozer lines and is holding. Helicopters helped firefighters by dropping water on the blaze until winds were too high.

Crews continue to hold and improve fire line along U.S. 199, according to the update. High afternoon winds sparked a spot fire near the Eight Spur Gulch area. It grew to 20 acres before crews put it out.

In the Slater Fire’s south zone, crews continue mop up in the Happy Camp and Indian Creek areas. When conditions are favorable, firefighters will use prescribed burning to remove existing fuel between indirect containment lines and the main fire, according to the update.

The Slater Fire’s spread in that area has also slowed as it burns into the Natchez Fire scar, according to the update.

Cool moist weather is expected to continue through Friday with possible isolated light showers, according to InciWeb. However, forecasters are predicting “critical fire weather” conditions for Sunday and Monday due to decreased relative humidity and higher temperatures.