SMOKE REPORT: Conditions Looking Good on the Coast; Relief Possibly Coming for Inland Areas With Chance of Rain Later in the Week » 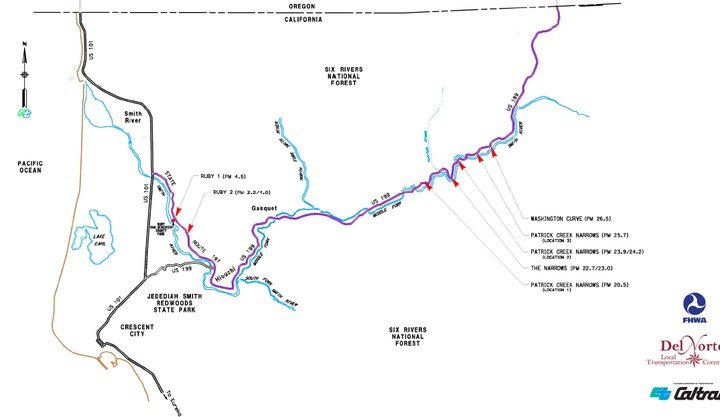 Saying he spoke with those who object to the endeavor, including Friends of Del Norte, the Solid Waste Management Authority’s public representative formally declared his opposition to the STAA 197/199 project.

“(Friends of Del Norte) is saying improving the road at the minimum amount it’s going to be improved, would actually make it more dangerous for the average driver simply because traffic would feel free to drive faster,” Tompkins said, reiterating a concern Friends of Del Norte, the Center for Biological Diversity in Berkeley and the Arcata-based Environmental Protection Information Center stated as part of a lawsuit that stalled the project in 2014. “And there would be more trucks on the road.”

Tompkins questioned Del Norte Local Transportation Commission director Tamera Leighton about the $34 million project, which seeks to widen five curves on U.S. 199 and State Route 197. The project also includes replacing a bridge on U.S. 199 that was built in 1924.

Caltrans’ goal is to make the highway safer for trucks meeting the 1982 Surface Transportation Assistance Act (STAA) standard, according to a staff report submitted to the DNSWMA on Thursday.

Tompkins then brought up Friends of Del Norte’s concerns regarding a prediction from Caltrans — that the improvements would result in 70 large trucks on the U.S. 199-State Route 197 corridor per day.

Leighton said as the population and goods movement increases nationwide, traffic on U.S. 199 will be increased as well even without STAA-standard trucks being able to access the highway.

“When you talk about 70 increased vehicles per day over U.S. Highway 199, I don’t believe it’s going to be noticeable,” Leighton said. “It’s just not that many. It’s not like all of that will happen in a 10-minute time period.”

"We'd like to see some shoulder," Slagle said. "That's a hazardous road. We have 10-12 trucks running over that every day, anything would help."

Following the DNSWMA’s 3-1-1 vote, Commissioner Chris Howard who has been a proponent of the project since 2005, offered to discuss Tompkins’ concerns with him. Howard said while it’s good to listen to community members, elected officials “are doing the same thing.”

“I’ve been working on this since 2005 with Tamera and there’s a lot of facts out there, Mr. Tompkins, that I’d be more than happy to discuss with you,” Howard said. “(You’re) being fed information that is not factual and we cannot continue to move the narrative forward and expect the people of Del Norte County to understand the great complexities and nuances (needed) in order to improve safety on U.S. 199.”

The Del Norte County Board of Supervisors, Crescent City Council, Del Norte Unified School District Board of Trustees and the Crescent City Harbor District have approved resolutions reaffirming their support of the STAA 197/199 project.

The Local Transportation Commission will also seek support from state and federal representatives as well as elected boards in Curry, Josephine and Jackson counties in Oregon and Humboldt County in California, according to Howard.

Many local boards publicly stated their support for the project in 2014.