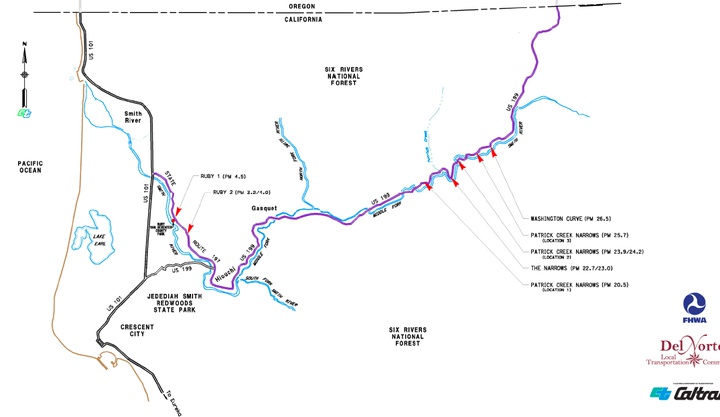 The Del Norte Local Transportation Commission can add the Crescent City Harbor District to its list of supporters for a project to bring highways 199 and 197 up to 1982 trucking standards.

Harbor commissioners unanimously approved a resolution Tuesday reaffirming their support for the project, which has been stalled when Friends of Del Norte, the Environmental Protection Information Center and the Center For Biological Diversity obtained an injunction in 2014.

On Tuesday, Crescent City Harbormaster Charlie Helms told commissioners that the funding stream for the project may be expiring soon. Local Transportation Commissioners are asking local elected boards to reaffirm their support for the project to continue that funding.

“They want to keep the ball rolling so this whole project can be open and on the books at Caltrans to get the job done,” Helms said. “Otherwise, they start everything all over again, which, I believe, would include an environmental impact (document) necessary to get approval for the massive road project.”

Though they supported the project, the issue drew discussion amongst Harbor commissioners before their meeting began on Tuesday.

Commissioner James Ramsey said opponents of the project were concerned about a "major spill" contaminating the Smith River.

"You can get that designated through the State of California and restrict trucks over a 40-foot axel length down through that canyon," he said.

Last week, the Del Norte Unified School District Board of Trustees also unanimously declared their support for the STAA 197/199 project, stating that widening the road is also essential for school buses.

The $34 million project includes widening three curves on U.S. 199 and replacing a bridge that was built in 1924. It also consists of widening two curves on State Route 197 near Ruby Van Deventer County Park.

Caltrans’ goal is to make the project safer for trucks meeting the 1982 Surface Transportation Assistance Act (STAA) standard. The project has been paid for with state and federal dollars since 2008 and was about to enter the construction phase when Friends of Del Norte, EPIC and Center For Biological Diversity initiated a lawsuit that stalled the project in 2014.

The three conservation groups argued that allowing for the larger STAA trucks would increase, rather than decrease the risk to safety on the two roads, Friends of Del Norte representative Don Gillespie told the Wild Rivers Outpost on Monday.

The three groups are also concerned about the possibility of a hazardous material spill impacting the Smith River, according to Gillespie.