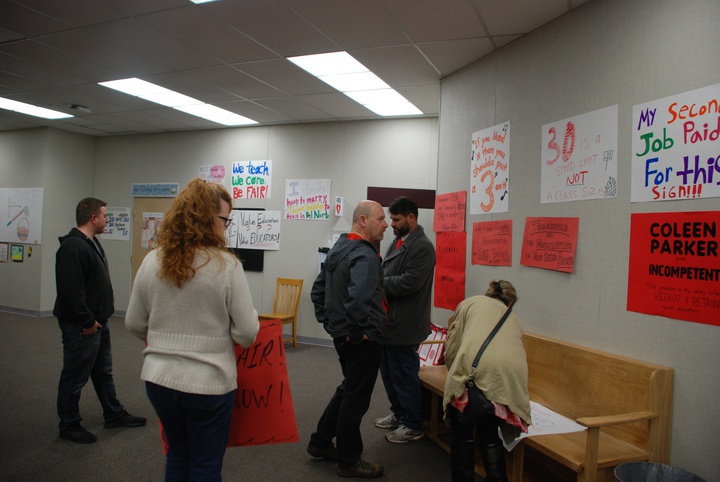 In this file photo, teachers urge school board members to bring impasse over salaries to a close. File photo: Jessica Cejnar

A retired teacher says COVID-19 has prompted him to abandon a recall effort against three members of the Del Norte Unified School District Board of Trustees this year.

Mike Mealue, who had announced the recall effort in January when his colleagues were at an impasse with the district over salaries, said he and two others had raised about $5,000, collected roughly 400 signatures and had filled out paperwork with the California Secretary of State’s office and with the Del Norte County Elections Office.

But by early March when the World Health Organization had declared COVID-19 a pandemic, Mealue said he and volunteers working for the recall campaign decided to postpone their efforts and “see what happens.”

“I was not going to have people out there getting signatures and talking to people well within the 6-foot distance — it just wouldn’t look right,” Mealue said. “And then we just never started up again because things got worse.”

The DNUSD Board of Trustees closed schools on March 15 due to the pandemic.

About $2,500 is left of the $5,000 collected for the recall effort, Mealue said. That money will be donated to the Del Norte High School Music Boosters program, he said.

A recall effort against District 3 representative Frank Magarino wasn’t allowable because his seat would have been up for election within six months of the June deadline set for the collection of signatures, Mealue said.

The District 4 seat on the Board of Trustees was vacant. Mealue said he had applied to fill the vacancy, but that position ultimately went to Charlaine Mazzei.

Mealue’s recall effort came in the midst of a 14-month contractural battle between DNUSD and the Del Norte Teachers Association over salaries.

Unable to reach an agreement, both sides met with a California Public Employees Relation Board mediator, who released a report on Jan. 14, 2020 based on the district’s initial proposed salary increase of 1 percent.

“Due to COVID and the uncertainty about where we were going to be, we went ahead and accepted their last offer,” DNTA President Marshall Jones told the Outpost on Tuesday.

As he and his colleagues wrap their head around distance learning, which also started Monday, Jones said DNTA’s negotiations team is looking at specific aspects of the contract rather than the whole thing.

“We just can’t take on that much,” said Jones, who teaches 7th and 8th-grade language arts at Smith River School. “It’s so hard — this whole COVID thing. I’m standing in my classroom with an empty classroom, but I sure worked my butt off today.”

DNTA has negotiated a memorandum of understanding with DNUSD over changing the work calendar for its members due to COVID-19. This included asking certificated staff to work an extra two days of professional development as well as agreeing that the first day of student instruction would be Aug. 31 — a week later than previously scheduled.

DNUSD certificated staff were also presented with a telework agreement from the school district which addresses an alternate work site apart from their classroom, according to Jones. He noted that this is in response to requests from parents and some school board members asking requiring teachers to be in their classroom when they’re conducting lessons.

Mealue, who had been the DNTA president about 10 years ago, said he had hoped his recall effort would be a “shot across the bow” to get the school board pay more attention to the day-to-day process of education rather than the budget.

“We’ll see what happens with this election too,” Mealue told the Outpost. “That might change things.”

Mazzei is running unopposed for the District 4 seat in the November 2020 election. Magarino faces challengers Sheryl Steinruck and Billy Hartwick for his District 3 seat on the DNUSD Board of Trustees.