ANGELS and DESPERADOES: Franchise for Sale, or Not? The 2020 Vote » 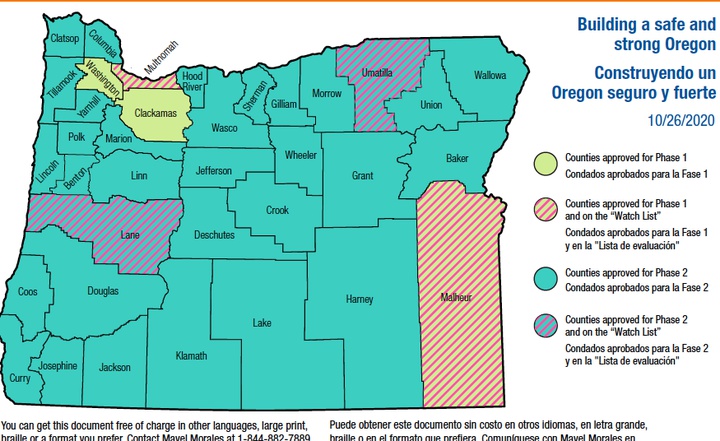 By John Ferrera and Jessica Cejnar

Though many of their youngest students have ventured back into the classroom, at least part time, Curry County schools and others in Oregon have received a roadmap for reintroducing older grades to in-person instruction during the COVID-19 pandemic.

“Too many of our students haven’t seen the middle of a classroom since March,” Brown said at a media briefing. “Zero risk is not the way forward, but we can be thoughtful and we can be smart about minimizing risks.”

The new metrics include increasing access to in-classroom instruction at the elementary school level; instituting a two-week review period for examining metrics data rather than a one-week period for three weeks in a row; and replacing the state positivity rate for the county positivity rate, according to an Oregon Department of Education news release.

“This increases local focus,” he said. “Oregon has many counties that are tied closely to the region or to other states as much, or more so, than to the state as a whole.”

Reviewing the metrics data for a two week period rather than three consecutive one week periods will “avoid the situations we’ve seen where a one-time cluster in a smaller county resets the clock for them for an additional three weeks,” Jeanne said.

Expanding access to in-person instruction to include all elementary students through grade six rather than just kindergarten through third-grade acknowledges that younger students are less prone to severe illness from COVID-19 than older children and adults, Jeanne said.

He noted that older students are more prone to individualized schedules that involve mixing cohorts, while remote learning is less effective for young students.

“We’ve heard from many families who want to see their students back in school,” Jeanne said. “We just released survey data that also tells us that a majority of parents are reporting significant stress in balancing work and supporting their kids in distance learning. This approach gives more schools the chance to reopen based on the conditions in their communities.”

Brown noted that roughly 130,000 Oregon students could return to the classroom under the revised metrics. For districts that can’t open its schools yet, the metrics can serve as a guidepost for “where we need to get to so we can return children to the classroom,” Brown said.

Brown noted, however, that Oregon’s COVID-19 case count continues to increase. The Oregon Health Authority announced Friday that the number of active cases is about 600 with two deaths.

There are five active novel coronavirus cases in Curry County. Fifty-four patients have recovered and one has died, according to the Curry County Office of Emergency Management.

Curry County is in the “green zone,” said Tom Denning, principal at Riley Creek Elementary School in Gold Beach. This designation allows schools to bring up to 10 students on campus for two hours a day, Denning said.

David Marshall, superintendent for Brookings-Harbor School District, noted that the state positivity rate counties had to meet to allow more of its students back into the classroom was fewer than 10 cases per a population of 100,000. In Curry County, population 22,925, three positive coronavirus cases would have put it above that threshold, though its positivity rate overall is very low, Marshall said.

“Our big limiter now is for (grades) 4-12 to come back, you need to meet both the metric of the state positivity level,” he told the Outpost on Thursday. “Typically we’ve met that. I’m hoping it will change.”

Brookings-Harbor School Districts youngest students have been learning both in-person and online since about the beginning of the school year, Marshall said. Half of its kindergartners through third-graders would come into the classroom in the morning and the other half would be on campus in the afternoon.

A few weeks ago, the district’s older students have come in for specific instruction if they’re special needs or have attended classes like wood shop, which requires in-person instruction, Marshall said.

“Overall, grades 4-12 are in distanced learning mode and have been since the start of the year,” he told the Outpost. “Some of the rules account for smaller settings — a smaller population (and) smaller schools (get) a little more flexibility. If your school has more than 250 kids, you have different disease metrics that you have to meet.”

Though state officials announced that the new metrics that allow more students to return to the classroom took effect Friday, most districts aren’t going to be able to implement them by Monday. Many need time to plan and adapt, Oregon Department of Education Director Colt Gill said. Most Oregon students will still participate in distance learning, he said.

Marshall said he feels comfortable with Brookings-Harbor District’s planning and, while he wants to make sure his district is prepared, officials would want to bring students back to school “sooner than later.”

Brookings-Harbor may begin by bringing a few more grades back to campus and then gradually increase their numbers.

“It’s gone well, but we want to make sure that as we roll up more grades we are effectively working through that prior to having all the kids there,” he said. “Phase roll-in within a relative short amount of time. With the hybrid model, it’s critical that it goes well and we do a good job at following all the rules and guidelines.”

At Riley Creek School, staff had expected to begin hybrid classes this week, but hit some “transportation snags,” Denning told the Outpost on Thursday. Instead, “limited in-person instruction” is expected begin at the K8 school with 320 students on Tuesday, he said.

“We had to figure out where all the kids lived and then we had to contact every family to find out where the kids needed to get picked up at. Then we had to recreate all the bus routes,” he said. “We basically ran out of time and had to reschedule. It was a logistical challenge, to put it mildly.”

“Limited in-person instruction” will begin Tuesday. A third of the students in grades k through 5 will come to school Tuesday, Wednesday and Thursday for two hours at a time, while online instruction will occur in the morning, Denning said.

When the numbers allow it, he said, Riley Creek will bring half the kids into the classroom in the morning and the other half on campus in the afternoon.

Riley Creek students will be placed in the morning or afternoon cohorts based on where they live, Denning said.

Riley Creek students will also be subject to “observations” when they exit the bus at school, he said.

“If a student seems sick, the teachers will know right away,” Denning said. “You can tell if a kid is not feeling good. Instant thermometers are available, but (there are) no plans to test every student every day.”

If a child is sick, the family would be notified and be asked to take him or her home, Denning said. Staff would also clean any areas where that child had been.

Everyone will wear masks, there will be a hand washing station in every classroom as well as hand sanitizer stations scattered throughout the school, Denning said. Students will also be taught how to practice social distancing.

Teachers are also getting acclimated to the new hybrid learning model, Denning said. This is why they’re given extra time to create lessons, he said, and why students will be in the classroom three days a week.

“You think it would just be open up a video for the kids and learn, but it’s not that simple,” Denning said. “It’s a whole paradigm shift for education — to take what we do in the classroom and put it on a 14-inch screen.”

Students at Gold Beach High School have been attending classes via a block schedule since Monday. They take part in periods 1 through 4 Mondays and Wednesdays and periods 5 through 7 Tuesdays and Thursdays. Every day includes self-guided learning and group meetings as assigned, according to the high school’s web site.

On Friday, students meet in periods 1 through 7 for 25-minutes at a time and then take part in asynchronous learning.

At the Port Orford Langlois School District, while there are no positive cases in that “school community,” Superintendent Steve Perkins reiterated the need to keep sick kids home, teach proper hand washing, wear masks and safely distance from people.

In an Oct. 29 letter to parents, Perkins said the district would notify parents if there is a positive COVID-19 case at one of its schools.

Meanwhile, on Friday, Brown urged Oregonians to “stay vigilant” as the state moves toward reopening schools. This includes a rigorous hand-washing regime, staying home when sick, wearing a mask and getting a flu shot to avoid a “twin-demic.” Brown also urged Oregonians to avoid large social gatherings.

“That last part is really critical,” she said. “We’re about to enter my favorite time of year. For the holiday season, it’s going to be really difficult to stay smart and avoid large gatherings with families and close friends. I crave connections and celebrations so much… we must retrain ourselves to live in a way that minimizes risk and keeps us all safe.”