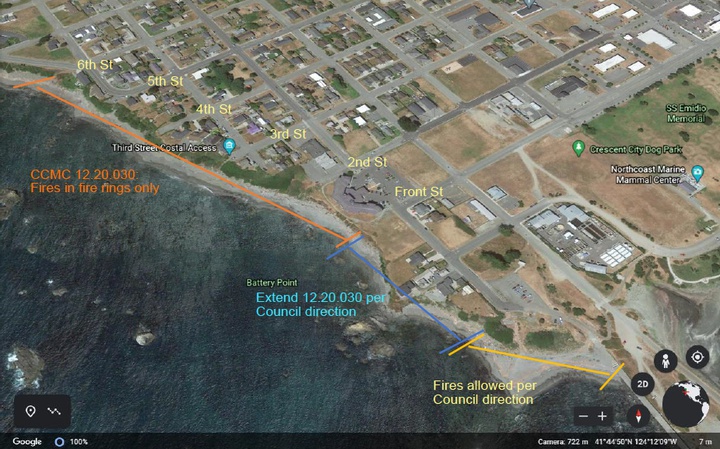 Finding homeowners split over whether beach fires should be banned between Battery Point and 6th Street and unable to reach a consensus on it themselves, the current Crescent City Council punted the issue to their future colleagues.

Staff brought proposed changes to a 40-year-old ordinance before Councilors for a fourth time on Monday after surveying roughly 16 homeowners along that stretch of coastline. Councilors also discussed the issue two days after Crescent City Fire and Rescue crews responded to a blaze on the beach at 8th Street and Pebble Beach Drive.

“It was pretty impressive looking,” Crescent Fire Chief Bill Gillespie told the Council of the fire his firefighters responded to at about 6:52 p.m. Saturday. “They had brush clear up the bank on fire and this one stemmed from a homeless camp. It ran through the brush, (firefighters) said they had trees on the bank crowned out, you wouldn’t believe the amount of embers that were blowing into the field across the road.”

Gillespie said it took a little over an hour for firefighters to extinguish the blaze.

On Monday, City Manager Eric Wier told Councilors that after receiving direction from them, the earliest staff would bring the ordinance back to them for introduction and adoption would be Nov. 16. Noting that results of the Nov. 3, 2020 general election wouldn’t be certified until after Nov. 20, Wier said a new City Council would have the final vote on the beach fire ordinance.

“That Council would sit for a public hearing,” Wier said. “Upon Council direction tonight, we could postpone introduction of the ordinance.”

The modified ordinance Councilors discussed Monday prohibited beach fires on public property between 6th Street and the Battery Point Lighthouse parking lot. People could still have fires on private property, but only with written consent from the owner, Wier said, but they would still be subject to restrictions.

Allowable fires would have a base of no more than 3 feet in diameter and a height of 2 feet, according to City Attorney Martha Rice. They would be required to be at least 25 feet away from vegetation and buildings. The burning of non-organic materials would be prohibited.

According to Rice, this would bring the city’s ordinance in line with the 2019 California Fire Code.

“The fire chief does have authority to order the extinguishment of any fire that presents a hazard due to weather conditions or some other local conditions,” Rice told the Council.

Armed with the modified ordinance, staff reached 11 out of the roughly 16 property owners between 6th Street and Battery Point, according to Wier.

In response to the first question — banning beach fires on public property — six property owners said they did support a prohibition, while four opposed it.

The question about a total ban on beach fires for private and public property garnered a split vote — five in favor and five opposed, according to the city’s staff report.

“One person said, ‘Whatever the city feels is best,’” Wier said.
In response to the third question — an 11 p.m. curfew — four people said yes while seven said no. One homeowner wanted a 10 p.m. curfew, according to the city’s staff report.

After hearing from area homeowners who continued to argue against allowing beach fires between 6th Street and Battery Point, Crescent City Mayor Blake Inscore suggested including public property between 6th Street and the city boundary at Preston Island in the prohibited area. Though he didn’t speak with the property owners staff surveyed, Inscore said he did talk with people who live in the area. 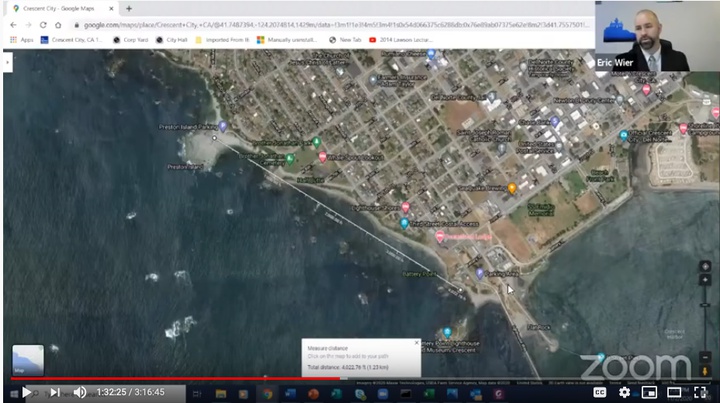 “Other than one who lives on the water side, I’ll be honest with you, I have not had a single person outside of this Council, specifically tell me they want beach fires in that area,” Inscore said.

The mayor acknowledged his colleagues, Mayor Pro Tem Heidi Kime, who continued to oppose a ban on beach fires on public property, and Councilor Jason Greenough, who brought up the concept of liberty.

“I think people are hesitant to say they want some kind of prohibition,” Inscore said. “Maybe for, Councilmember Greenough, the very reason you say, that it seems like we’re taking away liberties. Generally, people like to give people the opportunity to have as much freedom as possible and I think that’s a good thing.”

Having walked in the area, Inscore said allowing fires on the beach wasn’t a “safe option.” He noted it’s sensitive habitat — resident Natalie Fahning noted that otters that would normally frequent that stretch of coastline stay away due to the fires. Inscore also pointed out that the area is frequented by transients.

“I think the best way to enforce this and to keep it safe for everybody is simply to say in that whole stretch there should be no fires,” he said. “When we come to these big events and the parties that do happen in those areas, (revelers) almost always leave remnants of their activities behind for somebody else to clean up.”

Though Greenough said he disagreed about extending the beach fire prohibition to include Preston Island, he felt the proposed size and location restrictions on fires, including that they be on private property only, were reasonable.

Noting that the question of whether fires should be banned entirely was 50/50, Greenough said he has to “lean on the side of liberty.” He said the ordinance with Rice’s modifications was a reasonable regulation of people’s behavior.

“We can’t just be trampling on half the population’s liberties just because a couple of people on the other side feel that it’ll be an overdue burden on them,” he said. “This is going to give our law enforcement, our fire department, tools to enforce the law. And we’re planning on putting up signage to educate. I think this is a balanced way of doing it.”

Councilor Alex Fallman agreed with Inscore’s proposal to include the area to Preston Island in the ban. He said he would be favorable to prohibiting beach fires on private property as well.

The original ordinance, created in 1980, allowed beach fires in city-owned fire rings between 6th and Front streets, according to staff. Those fire rings don't exist.