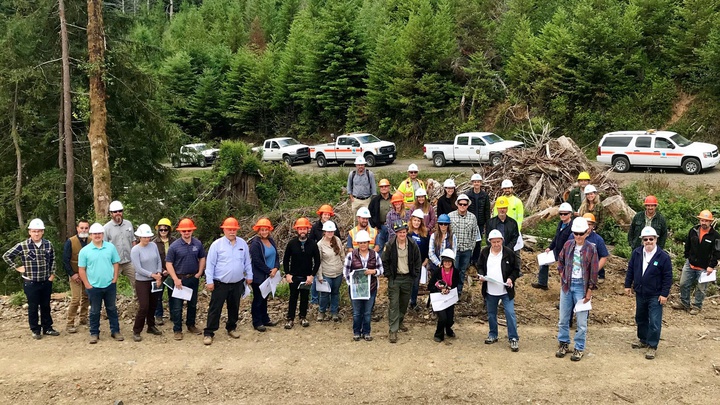 After a summer of flying drill rigs in by helicopter, collecting photogrammetry and LiDAR data around the Last Chance Grade site, Caltrans will spend next year refining alternatives for rerouting U.S. 101 around the landslide.

The current work to stabilize the highway will include having to close the road down at night possibly next spring, he said.

“This is a landslide project,” Matteoli said. “Under the existing alignment, there are active landslides. There are also ancient landslides to the east of the ridge where several of the alternatives are proposed. We’re collecting information about the geology so we can understand and design the alternatives.”

At a virtual town hall meeting hosted by State Sen. Mike McGuire, Matteoli and Dina Potter, a consultant with Kansas City, Missouri infrastructure firm, outlined the progress made toward selecting an alternate route around the landslide 10 miles south of Crescent City. They also discussed next steps, challenges faced in keeping the project on schedule and ways Caltrans could potentially shave time on getting the endeavor closer to construction.

Other topics discussed included being able to complete the project with minimal impact to cultural resources and sensitive species, including old growth redwoods. Whether the installation of broadband will be included in the highway’s new alignment. And what would happen if the road should fail before an alternative is found — a question Cohen says he’s received for many years.

“If the roadway failed at one location and we couldn’t rebuild a wall there, we would retreat, cut into the hillside, that’s why we’ve committed to making sure the grade is open,” he said. “We’re comfortable if a substantial failure (occurs) we’ll get out there with an emergency project to stabilize the roadway or retreat to a stable area. It depends on how it would fail.” 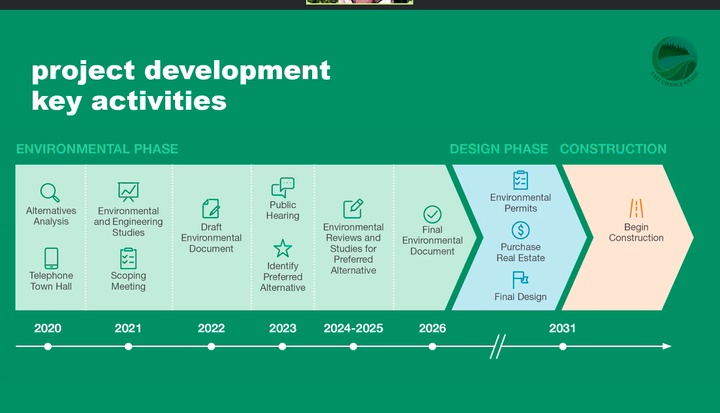 The Last Chance Grade project spans a three mile stretch of road with four active, deep-seated, slow-moving landslides bordered by an ocean of trees to the east and an actual ocean on the west, Matteoli said. The area is in the middle of Redwood National and State Parks, a UNESCO World Heritage Site, and is within the ancestral territory to five tribal governments.

Caltrans has spent more than $50 million since 1981 to keep the current alignment operational, Brady said.

This year, crews have raised the road about 18 feet, installing new walls and leveling off a dip in the highway locals have called the ski jump, Cohen said. The project required closing the highway at night for about five days last summer and will likely require another nighttime closure after the holidays — between January and February or by June at the latest, Cohen said. With the additional $16 million, Caltrans will have the money to finish all the emergency work needed while it also works on getting through the bypass project, he said.

For the larger Last Chance Grade project, Caltrans is considering six possible routes around the landslide while a seventh option would leave the highway’s current alignment as is.

The six routes vary in length from 1.5 miles to 3.5 miles and range in cost from about $300 million to $2 billion. Four alternatives include bridges. Three include tunnels. One possible route consists of a full tunnel paralleling the existing alignment and has an estimated cost of $1.1 billion to $2 billion.

There are four working groups committed to the project, including one formed by Congressman Jared Huffman, who joined Thursday’s meeting briefly. There is also a Cultural Resources Working Group that includes members of five tribes with ancestral territory in the area. According to Matteoli, those tribes are cosignatories on a programmatic agreement with Caltrans that cements the procedures in place to ensure minimal impact to sensitive sites.

Caltrans is currently in its third year of collecting geotechnical data using $50 million from the California Transportation Commission. Matteoli noted that ancient and dormant landslides exist east of the highway’s current alignment.

The geotechnical studies will help determine the best possible alternative, collecting data on rock material, movement and the role groundwater and rain plays in that movement, Matteoli said.

The data not only helps shape the design of U.S. 101’s alternative route, it will help Caltrans compare alternatives to determine which option will have the least long-term risk of failure, he said.
Caltrans and HNTB will also conduct a tree survey in 2021, particularly at the north end of the project where known old-growth areas are, Potter said.

“We’re working with different working groups to go through alternative analysis — are there alternatives that meet the purpose and need (but) have higher environmental impacts that we can drop out?” she said. “Let’s look at ones that have the best opportunity of being selected at the end to save time and save money.”

According to Potter, armed with the geotechnical data, her firm and Caltrans will draft an environmental document in 2022 and conduct a public hearing to help identify an alternative in 2023. There could be a two-year period to conduct “ground disturbing activities,” to help find a clear alternative that would result in minimal impact to sensitive cultural and natural resources, she said.

The agency will obtain needed environmental permits and prepare final design plans, with public input, and then construction would begin by 2026, Potter said.

Potter said HTNB and Caltrans is working to shave off as much time off the project’s schedule as possible. One way is to prepare the project’s final design in conjunction with obtaining the necessary environmental permits, she said. Noting there are 900 acres involved in the project, Potter said Caltrans is also working with Redwood National and State Parks to determine where sensitive resources are.

“We’re going slow a little bit on the front end to save litigation on the back end,” she said, “remembering, in the end, that will cost more time than anything. We want to protect the project from that.”

Bjelajac noted that all the proposed alternatives involves putting U.S. 101 through Del Norte Coast Redwoods State Park with some impacting more old growth redwoods than others. He noted that the project could also impact some of the park’s second-growth redwood stands, but said Caltrans is working with State Parks and others to determine the most sustainable path with the least amount of impacts.

“Sadly, but necessarily, we will be removing old growth redwoods,” Bjelajac said. “They will be impacted by this project, and we’re looking to do the least amount of impact that we can to get an alternative in there to give us the most sustainable roadway for the public to use.”

One question touched on whether constructing a more inland route for U.S. 101 will be an opportunity to extend broadband internet between Crescent City and Klamath — something Assemblyman Jim Wood, who also emceed Thursday’s meeting, is passionate about.

Broadband as well as non-traditional transportation options, including bicycling and walking, will be considered as the new alignment is constructed, Brady said.

“We want people to get out of their vehicles and start using the natural resource and not be burning so much greenhouse gases,” Brady said. “We want to reduce greenhouse gases and reduce the number of vehicle miles traveled.”

Another question touched on gas tax dollars generated by the California Road Repair and Accountability Act of 2017, or SB 1.

McGuire noted that even though many Del Norte County voters supported a repeal of the gas tax, it provides a significant portion of the funding necessary to build the highway around Last Chance Grade. Another major portion of the dollars needed to build a bypass is coming from “south of us,” McGuire said.

“My understanding is there is no way to get this thing built without the gas tax,” he said.

Brady noted that much of the funding for Caltrans’ State Highway Operation and Protection Program, which includes road maintenance and rehabilitation, comes from those SB 1 dollars too.

That program also provides resources for repairs after natural disasters, including wildfires, he said.