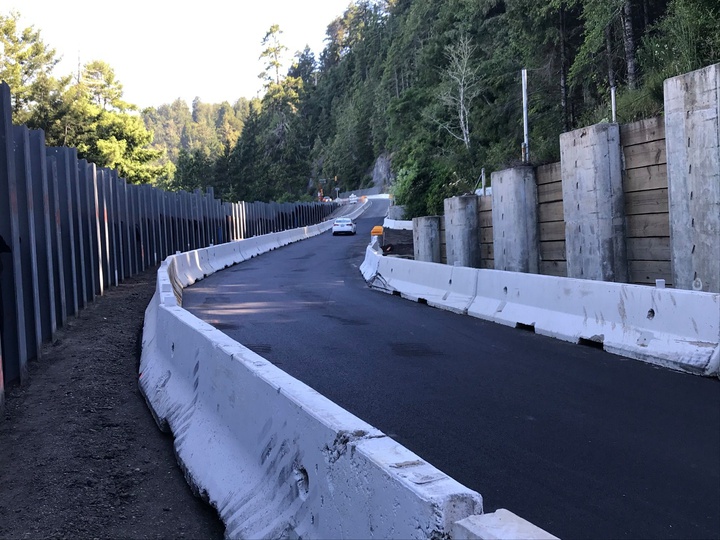 Caltrans crews worked over the summer to repair a dip in U.S. 101 near Last Chance Grade locals have dubbed the ski jump. Photo courtesy of Caltrans District 1.

Though environmental studies to find the best possible route around Last Chance Grade continue, Caltrans crews have been busy this summer to ensure U.S. 101 stays open.

Crews are also correcting a dip in the highway, which locals have dubbed the ski jump, project manager Jaime Matteoli told the Wild Rivers Outpost on Wednesday.

“It’s an effort to lift that area, which had dropped a number of feet and shifted to the west,” he said. “The project lifts up that area and shifts it to the east and corrects that dip.”

That project consists of raising the highway about 16 feet and installing a 600-foot wall, Matteoli said. Crews are drilling horizontally underneath the highway to install anchors for the wall currently, he said.

The overall Last Chance Grade project seeks to permanently re-route a three-mile segment U.S. 101 around the landslide. Roadway failure and geographic instability starts at Wilson Creek, according to Caltrans’ mailer.

The agency is considering six possible routes around the landslide while a seventh option would leave the highway’s current alignment as is.

The six potential routes vary in length from 1.5 miles to 3.5 miles and range in cost from about $300 million to $2 billion. Four alternatives include bridges. Three include tunnels. One possible route consists of a full tunnel paralleling the existing alignment and costs an estimated $1.1 billion to $2 billion.

Caltrans will enter its third year of geotechnical studies later this month, Matteoli said. Part of the project’s environmental study phase that began in 2017 with an initial $5 million, it was completely funded last year when the California Transportation Commission approved $45 million, he said.

“(That) extra $45 million will get us all the way through the environmental piece,” he said, adding that he just gave an update to the California Transportation Commission in August about Last Chance Grade. “It’s important to note it doesn’t include funding for the remaining phases. We still have the design that’s unfunded, right-of-way and construction that’s unfunded.”

Right-of-way funding is a pot of money Caltrans uses to purchase real estate for the project or address conflicts with utilities, Matteoli said.

After allocating the additional dollars needed to complete the environmental phase of the project, state transportation commissioners visited Del Norte County in November. In addition to meeting with residents, commissioners toured the project site.

Starting this autumn, Caltrans will fly drill rigs via helicopter into an area of county land east of the slide, Matteoli said. Part of the geotechnical studies, the agency received a county permit in August to conduct this work. Crews can fly the drill rigs into the area between Sept. 15 and early spring, Matteoli said, adding that timeframe is due to sensitive species being in the area.

“The scope involves using helicopters to fly into state parks, within old growth forest,” Matteoli said, adding that the work will be done in an area that’s part of the county’s jurisdiction. “The state still has involvement. They were engaged, we were communicating with them and they understood what was going on.”

The helicopters delivering the drill rigs will use staging areas to the east of U.S. 101, Matteoli said.

“The helicopters will not fly over the highway,” he said. “If they do fly over, they have to shut down the road and we don’t plan any of that.”

A telephone town hall meeting on the project will take place this fall, though a date hasn’t been determined yet, Matteoli said. For more information, click here.