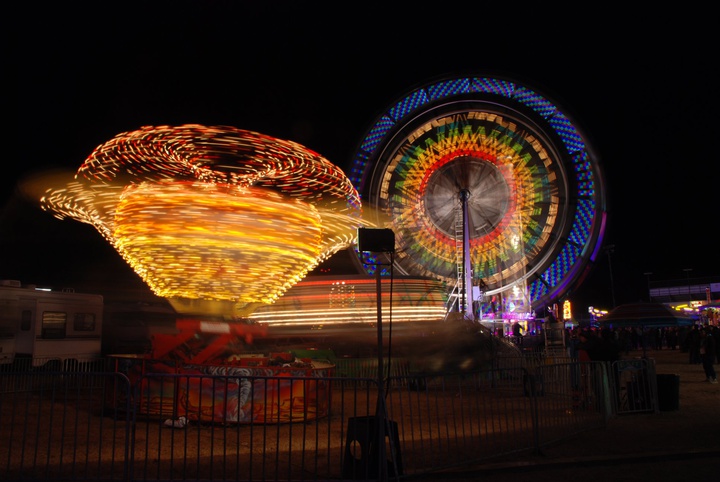 Lights from the carnival at the 2018 Del Norte County Fair lights up Crescent City. The fair board on Thursday made the difficult decision to cancel 2020's event due to COVID-19. Photo: Jessica Cejnar

More than one member of the 41st District Agricultural Association wiped away tears as they made the decision Thursday to cancel the 2020 Del Norte County Fair.

Though they praised their chief executive officer, the association — better known as the Del Norte County Fair board — noted that other fairs are being cancelled due to social distancing concerns because of COVID-19.

“Our CEO has done everything possible,” Kimberley Haban said of fairgrounds CEO Kim Floyd. “I have been here when she has been on the phone. She has done surveys. She even actually physically went out, her and Nick (Floyd), and measured off how many people we could have at a concert. She went above and beyond trying to find a solution for us, and, unfortunately, I just don’t think it’s going to happen, which really saddens me because I just hate to see this.”

Sponsors for the event, formerly scheduled for Aug. 6-9 this year, have dried up, Board President John Pritchett told his colleagues. Vendors are dropping out. Paul Maurer Shows lacks the manpower to bring a carnival to Del Norte County, Pritchett said. And, he noted, California’s four-stage roadmap for relaxing COVID-19 safety measures don’t allow mass gatherings until Phase 4.

“Del Norte County this week reached Phase 2,” Pritchett said. “But even if the governor allowed a special decree, we’d have to practice social distancing and an intensive disinfecting procedure. We’d lose 75 percent of seating in the grandstand and hire a small army of individuals to clean and enforce state regulations.”

The Del Norte County Fair Board’s decision comes as their counterparts in Humboldt, Coos, Douglas, Siskiyou and Curry counties have pulled the plugs on their events due to the novel coronavirus, Pritchett said.

Following Thursday's meeting, Pritchett told the Wild Rivers Outpost that since the fairgrounds is state property, the board has to comply with California safety mandates.

“Regardless of the governor administration’s declaration we really believe it’s the right thing to do,” he said.

Del Norte County has 20 confirmed COVID-19 cases as of 5:26 p.m. Thursday, according to the Public Health Branch. Four people have recovered, the tests for 37 cases are pending and the results for 652 are negative.

On Thursday, Floyd, whose voice broke as she took the board’s vote, said she had deployed a survey last week asking customers and vendors if they felt safe coming to the fair. One woman said she wouldn’t be comfortable going to the attractions held indoors, but would be OK with staying outside, Floyd said.

“I said, ‘Oh, OK, you feel comfortable going to the concerts,’” Floyd told the Fair Board. “‘And she said, ‘No, that’s a lot of people. I’m not coming to the fair this year.’”

Though the fair is cancelled, Haban and her colleague, Vanessa Alexandre, are working to hold an alternative to the Junior Livestock Auction that would leave youngsters with “a little bit of money in their pocket.”

Held the final day of the fair, the livestock auction is the culmination of months of hard work for scores of youth participating in 4-H, the Lake Earl Grange and Future Farmers of America. This year, though prices aren’t settled yet, the Livestock Committee has settled on a per-head sale, Haban said.

Roughly 80 animals could qualify for the sale, Haban said, including seven or eight steers and 35 hogs. That count doesn’t include small animals like rabbits and chickens, she said. Kids will only be allowed to sell one animal, Haban said.

Before they’re allowed to participate in the auction, the animals have to be examined by a veterinarian and a judge and weighed, according to Haban. A pre-fair weigh in won’t happen, but the livestock committee will let buyers know what their options will be when it comes to purchasing an animal, she said.

According to Alexandre, the animals will be inspected by a veterinarian as well as someone “of high rapport in that class.”

“These animals are going to have to meet a certain grade to join the (sale),” she said. “it’s not just a free-for-all. They’ll be weighed, like Kim said, but also inspected visually.”

Though there will be a livestock sale this year, the venue has yet to be decided on,. According to Floyd, the fairgrounds’ insurance representative recommends not holding the sale on site due to liability issues. Floyd, who spoke with Lake Earl Grange representative Helen Ferguson, said there’s a possibility that Lake Earl Grange could hold the inspections and sale on its grounds, but that is still being worked out.

“One of the things we talked about is putting on the fairgrounds website a page with all the kids’ animal projects and links to 4H, Grange and FFA, so they can go directly to them as well,” Floyd said. “We are also receiving messages (from) people that are interested in buying an animal in case the fair is cancelled. There are people already reaching out to us, saying they would like to buy an animal this year.”

Though they were hopeful about the alternative for the livestock auction, Robyn Holt and Steven Westbrook, representatives of the Del Norte County Fairgrounds Recreation and Park District, were saddened by having to cancel the fair.

“I’m thankful you guys are choosing to make a decision now so the livestock auction has time to come up with a plan and be prepared,” Holt said. “It’s a lot of stress on the kids and the committee.”

In a news release Thursday, the Del Norte County Fair Board stated it hopes to be able to hold a “mini fair” next spring along with the annual event in August 2021. However, Floyd told the board on Thursday that changes will have to be made to be able to hold the fair.

“It’s probably going to take a full year to try and adjust because this is not going to go away,” she said. “We may have to completely change the flow of our fairgrounds just to make it so it’s safe and (will) work better for next year or for another event.”