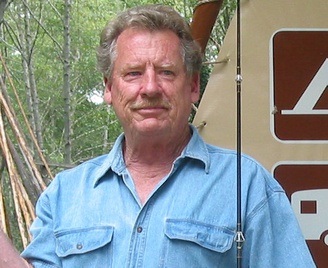 The proprietor of Kamp Klamath would regale Wilson and others he called his friends with tales of his adventures -- from navigating politics in Washington, D.C. to hunting in South America and gold mining in Alaska.

Funk could produce gold nuggets roughly the size of your thumb, Wilson told the Wild Rivers Outpost on Thursday. But, the former sheriff said, Del Norters will remember Funk as someone who worked hard to promote tourism in the community, particularly Klamath.

“He loved the river and the area,” Wilson said. “This is where he set down his roots.”

Funk, who, in addition to serving on the Del Norte County Visitors Bureau and the America's Wild Rivers Coast Marketing Consortium, spearheaded the local State of Jefferson movement, died of pancreatic cancer on May 11. He was 78.

Following a career in the tourism industry that took him to the caves of Baja, California and through the Sierra Nevadas, Funk was on a motorhome trip to Oregon and Washington when he happened upon a defunct campground on the banks of the Klamath, his nephew, Kevin, told the Outpost.

Funk and a girlfriend walked the property, spent the night out in front and fell in love with it. When he realized it was for sale, Funk bought it, put down roots and opened Kamp Klamath, Kevin said.

Kevin, who is Funk's closest relative, said though he wasn’t able to experience his uncle’s resort due to his job in the Bay Area, he knows Funk was passionate about it.

“He had such an enjoyment of talking with people and sharing the outdoors,” Kevin said. “He loved the outdoors. Loved fishing.”

Funk was also passionate about politics — something he shared with his friend, Del Norte County District 1 Supervisor Roger Gitlin. Funk helped run Gitlin’s initial campaign for supervisor in 2012 and his re-election campaign in 2016.

According to the county supervisor, Funk, knowing of Gitlin’s desire to clean up the community, came up with the moniker “let’s fix it,” which became his campaign slogan in 2012. However, Gitlin said, both he and Funk had similar personalities. Though they were good friends, Funk didn’t shy away from letting Gitlin know when he thought an idea of his needed work. Gitlin said this personality trait showed itself during his 2012 election.

“I had a nice professional 5-by-7 color flyer made up and on it were boxes — we’re going to do it with a mark in the box, and we’re going to do this with a mark in the box; here are my campaign promises — so I put an x in the box,” Gitlin told the Outpost.“Aaron said, ‘Throw these flyers away. You need to put a check mark.’ I said, ‘Aaron, I’m not throwing away 750 hard-stock flyers because there’s an x in the box rather than a check mark.’ He says, ‘Well, you’re hurting yourself. People notice things like that.’”

Winning the general election despite the “x in the box,” Gitlin couldn't help but point that out to Funk.

“In a Roger Gitlin way, (I) said, ‘You see, the flyer worked,’” Gitlin said. “He said, ‘if you’d have put a check mark in there you’d have won by more.’ Aaron was the kind of person who absolutely positively knew what he wanted to do and what he wanted to say when it came to politics. He had very little shades of gray.”

Part of a movement that began in Siskiyou County in September 2013, Funk brought members of the Jefferson Declaration Committee before the Del Norte County Board of Supervisors to get them to approve a resolution declaring their support of a 51st state.

Rather than voting on a resolution to declare their support of the State of Jefferson movement, county supervisors instead put that question to the community in an advisory vote that failed.

“We wanted Sacramento to have a discussion and we did not send a letter to even have (that discussion),” Gitlin said. “That was very frustrating to Aaron.”

Gitlin, who admits he often makes decisions that aren’t always popular with his colleagues, said Funk often told him that he shouldn’t care what his fellow supervisors think. Gitlin would often bounce ideas off Funk because he respected his opinions — often asking his friend if his actions or statements on the dais are off base. Funk, Gitlin said, always urged him to stick to his guns.

“I miss his advice,” Gitlin said of Funk. “Not that we didn’t go around, but it always ended up (with) ‘I love you, brother. You love me, and we don’t have to agree on everything.’”

According to Kevin, though Kamp Klamath is closed in response to California’s stay-at-home orders due to COVID-19, the resort will reopen. Kevin said a celebration of life for his uncle may also be in the works, though he’s not yet sure when that will take place.

“We have great staff on site who are committed to keeping the camp ready for opening and to open when it’s ready and safe,” Kevin said. “Following county guidelines is something we’re going to rely on.”