« After Serving 200,000 Meals to Kids During the COVID-19 Emergency, DNUSD Kicks Off Summer Food Program

With Projected $800k Budget Hole For 2020-21, City Will Likely Keep Pool Closed Through the Summer » 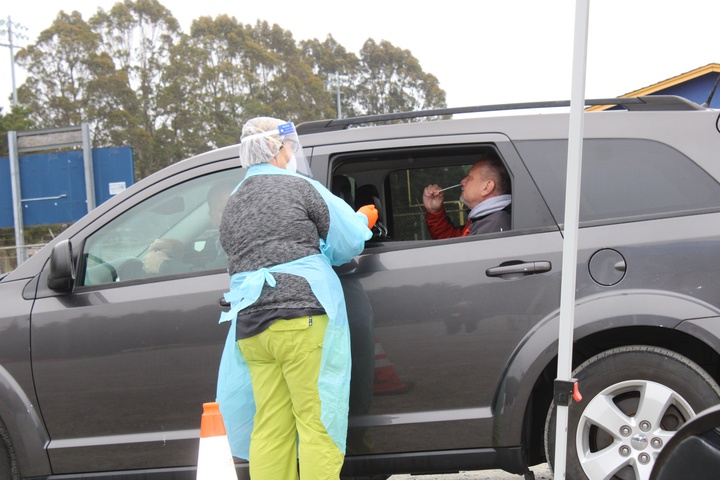 Del Norte currently has no active COVID-19 cases and can begin to resume activities associated with Stage 3 of California’s resiliency roadmap.

But some are riskier than others, Public Health Officer Dr. Warren Rehwaldt told county supervisors on Tuesday.

The public health officer said he was still determining how to go about allowing those activities to resume in a safe way.

“I think it would be useful for us to open up some of our (short-term) rentals, and whether we open at full capacity or 50 percent capacity, we’re still trying to figure out the best strategy,” Rehwaldt told supervisors. “There are a couple other things we consider them to be low risk. For example, museums and galleries — the traffic through those facilities is pretty low. That’s easily managed in terms of risk.”

Bars are risky environments since it's difficult to social distance, Rehwaldt said. Fitness centers are risky too.

“They’re important to people’s health,” he said of fitness centers. “But having a bunch of people on a treadmill, huffing and puffing and sharing air for any length of time, is a higher risk environment.”

The California Department of Public Health has guidelines on the safety measures proprietors of movie theaters, museums, fitness centers and bars must follow. Rehwaldt said he was hoping to have further information specific to Del Norte County by the end of the week.

Del Norte County has had 47 total confirmed COVID-19 cases, though as of 5:12 p.m. Tuesday, none were active, according to the Public Health Branch. A total of 1,734 tests have been administered, according to the branch’s new COVID-19 information hub.

According to Rehwaldt, most of the COVID-19 cases have been clustered in the Crescent City area, though they may have been contracted by patients in other parts of the county. Two staff members at Pelican Bay State Prison tested positive for the novel coronavirus as have staff members and patients at Sutter Coast Hospital, he said. There were also positive patients within local “agricultural enterprises,” Rehwaldt said.

In the past two months, public health workers have increased contact tracing locally and statewide, Rehwaldt said. Testing capacity in Del Norte County has also increased with a new state-funded drive-through site available to anyone for free at Del Norte High School.

The Public Health Branch had also contracted with Crescent City to test for genetic material belonging to the virus in the sewer system, Rehwaldt said. In mid-May, there was enough genetic material from the novel coronavirus consistent with up to 200 cases, though that dropped to between 100 and 120 cases by May 19, he said.

“We think the majority of activity was in the Crescent City area and in the surrounding areas — anything part of that system,” Rehwaldt said. “It probably will not stay that way in the future.”

According to Rehwaldt, testing wastewater determines if virus is being excreted through “normal bodily functions.”

As the Public Health Branch and Del Norte County’s information technology department continue to add more data to the COVID-19 information hub, one of the features will potentially be a geographical overlay to show people where disease activity is occurring, Rehwaldt said.

This was good news to several county supervisors, such as District 1 representative Roger Gitlin, who has pushed for reopening almost since California Governor Gavin Newsom instituted the statewide stay-at-home order on March 19.

On Tuesday, Gitlin, noting there are currently no active cases in Del Norte County compared the community to Curry County, which currently has two active COVID-19 cases.

In response to Gitlin’s question about streamlining the reopening process for businesses, Rehwaldt said the Public Health Branch asks proprietors to go through a check-list to self-certify that they are able to meet safety measures. The business owner would display that document in their window, Rehwaldt said.

The business owner would then receive a second document to post in his or her window showing the Public Health Branch has reviewed and approved their reopening plans, Rehwaldt said, though the process is changing.

Rehwaldt again referred proprietors to the CDPH website for information pertaining to their industry.

“The effort statewide was to shut down opportunities for transmission,” Rehwaldt told Gitlin, who had also asked about risk associated with RV parks. “At the statewide level they wanted to shut down all opportunities for transmission and it was to prevent a calamity. There are always going to be skeptics about what could have happened, what might have happened, but there’s no question in my mind and in the minds of people in public health who have been following this, if those measures hadn’t taken place, we would have had thousands and thousands and thousands of people die in California.”

Rehwaldt said he and Public Health Staff would continue to fine tune the process for reopening local businesses.