She's An Essential Worker; COVID-19 Could Kill Her 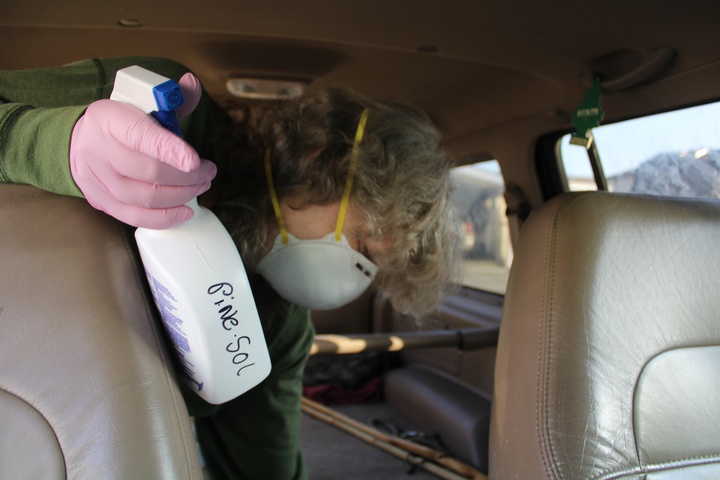 When she gets off work, Elizabeth Carter sanitizes her car before she does anything else. Photo: Jessica Cejnar

Elizabeth Carter’s efforts to stave off COVID-19 at work shows in the N-95 mask and latex gloves she wears, the liberal use of hand sanitizer and the constant hand washing.

Her shifts as an In-Home Supportive Services worker with a single elderly client are typically less than three hours long, but her safety measures start before she’s on the clock, and last after she comes home.

Carter showers, washing thoroughly with soap, and rubs herself down with alcohol before she heads for work. When her shift is over, she goes home, wipes the backseat and front seat of her Ford Expedition with Pine Sol before getting her clothes off and spraying herself down with more Pine Sol, heavily diluted.

Then it’s back in the shower, soap, water, and another alcohol rubdown before Carter goes about her day.

Letting her guard down could not only lead to trouble for her client. Carter, who has Crohn’s disease and lupus and has had multiple surgeries to repair hiatal hernias, says she could wind up in the hospital or worse if she gets sick.

“An autoimmune disease with COVID-19 is kind of a death sentence,” she said. “My doctor says I have a very high percentage of once contracting COVID-19, not surviving it.”

Both Crohn’s disease and lupus are autoimmune disorders. With Crohn’s, an inflammatory bowel disease, Carter said, she deals with a lot of internal bleeding, causing her hemoglobin to drop. She said she’s often anemic.

Carter is one of roughly 409 eligible IHSS providers in Del Norte County. IHSS is a state-mandated program, and though they’re not employed through the Del Norte County Health and Human Services department IHSS workers receive training and other support through its social services branch, said DHHS Director Heather Snow.

About 50 percent of the IHSS providers in Del Norte County care for a relative, according to Snow.

Most IHSS workers are represented by SEIU 2015, which has been working to provide gloves, masks, hand sanitizer and other personal protective equipment, Snow said. IHSS workers can opt out of joining SEIU 2015, she said.

With only 67 hours of work per month — 33 hours every two weeks — Carter said she can’t afford to pay the union dues.

However, though she has had eight surgeries — the most recent one in March — and despite her Crohn’s disease and lupus, Carter says her doctor refuses to put her on disability because she’s a “front-line health care worker.”

“They are few and far between at the moment and he’s keeping me on the front lines,” Carter said of her doctor. “If I wanted to (go) back on disability for a surgery, he would only give me six weeks of off-time.” (Multiple calls to the doctor's office for comment were not returned.)

The State Disability Insurance program provides partial wage replacement benefits to California residents unable to work due to illness, injury or pregnancy. To be eligible for disability insurance benefits, a physician must complete a medical certification.

A nurse practitioner can certify a disability, but he or she must perform a physical examination and collaborate with a physician or a surgeon, according to the California Employment Development Department.

According to EDD media services, however, there are no regulations addressing whether a doctor can refuse to help their patient obtain disability insurance benefits because they are an essential worker.

“This is out of the Employment Development Department’s purview,” an EDD spokesperson told the Wild Rivers Outpost. “For the purposes of DI medical certification, the physician/practitioner’s role is to determine whether their patient’s physical or mental health condition prevents them from performing their regular and customary work and causes a loss of wages.”

Carter has been an in-home healthcare provider since the mid-1980s, starting in Sonoma County. Though she’s a state employee, Carter said her hours are determined by the county social workers she works with and the needs of the client.

Though she acknowledges that SEIU 2015 is working hard to make more personal protective equipment available to their members, she said she has to provide her own.

“There are 400,000 IHSS workers in California, roughly, and there’s a lot of people in some really awkward and dangerous situations that are basically left out to dry,” Carter said. “You’re responsible for your own situation… I’m being told I’m a front-line worker and essential, yet it’s a minimum wage job.”

Carter added that working closely with her client often puts her into situations she’s uncomfortable with, such as venturing to the grocery store to go shopping.

Snow acknowledged that IHSS workers often find themselves in a difficult situation, and even more so during the pandemic. A client has the right to do what they want in their home, she said, and the worker has to decide whether they’re comfortable with that.

“If they decided it was too much of a risk or they themselves are in a vulnerable population and feel like the person they’re working with is not able to resolve that, they (could) probably get reassigned to somebody else,” Snow said. “I haven’t heard too much of that situation coming up.”

Early in the pandemic, Snow said, personal protective equipment was scarce and there were conflicting messages about who should wear masks — encouraging them to be reserved for first responders.

DHHS had a limited number of washable masks at that point, donated by folks in the community. Now, PPE is plentiful. The Del Norte Office of Emergency Services has a supply that is available to all first responders and hospital workers, Snow said.

“Essential workers like social workers and mental health providers are really thought of as secondary to first responders and healthcare providers that are in the hospital,” she said. “We’re not as prioritized, but our needs are still met.”

“He says, ‘Well, you’re tough. You’ll get through it,” Carter said. “‘Because you’re a front-line healthcare worker, and they’re few and far between, I got to keep you on.'”