Commercial Dungeness Crab Season Starts Dec. 23; Fishermen May Be In For A Low Abundance Year 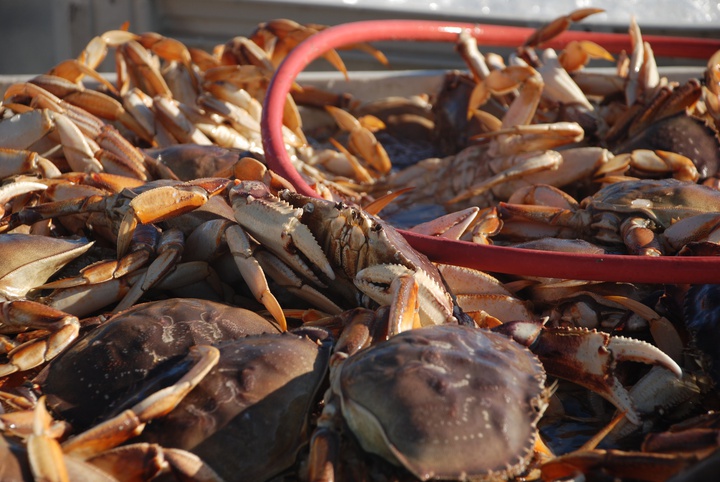 Seafood processors and fishermen have yet to agree on a price, however, according to Rick Shepherd, president of the Crescent City Commercial Fisherman’s Association. It could be after the first of the year before crab boats bring in their catch, he said.

Once fishermen do get on the ocean, the crustaceans that do find their way into their pots may  not be of legal size yet this year, according to Shepherd. But, given the COVID-19 pandemic, that may not be a terrible concept, he noted.

“Marketing is poor because of restaurants being closed,” Shepherd told the Wild Rivers Outpost on Monday. “I think processing plants earlier when they were shrimping had complications with getting shut down because of outbreaks. All of those things are going to be a problem through the crab season. So, nobody likes to see it. I always hate to see a low-volume year… it’s probably a good year to have a low volume because of the marketing problems and the pandemic in the world.”

Fishermen in the northern management area, which includes Crescent City, will be able to drop their pots at 8:01 a.m. Sunday, according to the California Department of Fish and Wildlife. In the central management area, the pre-soak period starts at 6:01 a.m. Dec. 22.

Opening the fishery on Dec. 23 was done partially at the request of commercial crab fishery, CDFW senior environmental scientist Ryan Bartling told the Outpost. Because the risk of whale entanglement was declining in all fishing zones, fishermen indicated they wanted a unified opener to the commercial season, he said.

According to a CDFW news release, the department initially planned to open the crab season this Wednesday. But the Whale Entanglement Working Group were unable to come to a consensus regarding whether to open or delay the season.

"Our recommendation was to open this Wednesday,” CDFW Director Charlton H. Bonham said in a written statement Friday. “But after hearing from parts of the fleet expressing a variety of views, and review of additional scientific information provided by Working Group experts, we decided on an additional seven-day delay. This gives the fleet extra time to get ready and get their gear in the water, certainty in that we’re opening statewide, hopefully the chance to get part of the holiday market and an additional seven days for any remaining whales to migrate. We support any additional measures the fleet or specific ports wish to take to minimize entanglements and also understand the additional hardships resulting from the COVID-19 pandemic. CDFW staff, collaborators and partners have worked hard to collect data to inform a unified statewide opener.”

CDFW, researchers, federal agencies and the fishing industries have conducted surveys between the Oregon state line and the Channel Islands since late October to observe concentrations of marine life. Whales have begun to migrate out of California waters to their winter breeding grounds, reducing the risk of entanglement, according to the CDFW.

During crab season, CDFW will work with the Whale Entanglement Working Group to review scientific information and advice to minimize the risk of whale and sea turtle entanglements.

According to Shepherd, who has been fishing for 40 years, crab volume comes in cycles. A lot of sport fishermen are seeing crab that aren’t legal this year, but will be legal next year or the year after, he said.

“We do have some recruitment coming up into the future,” he said. “The last two years have been not that great. That’s what happens in a down cycle. It goes down down and usually you hit a bottom and then it usually builds back up.”