Commercial Dungeness Crab Season Starts Dec. 23; Fishermen May Be In For A Low Abundance Year » 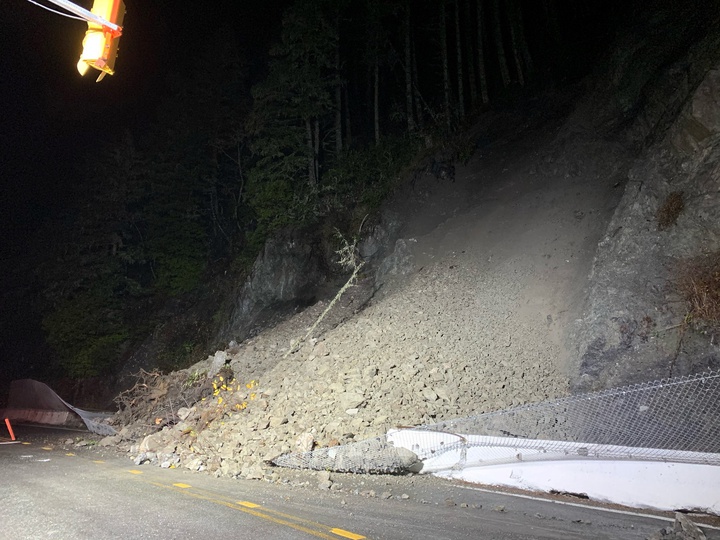 A landslide in the Last Chance Grade area prompted the California Highway Patrol to shut down U.S. 101 for about an hour. Photo courtesy of the CHP

A small slide in the Last Chance Grade area shut down U.S. 101 for about an hour or two early Monday morning, according to Caltrans.

The landslide occurred at about 4:25 a.m. near milepost marker 15.5 on U.S. 101, an area 10 miles south of Crescent City that’s already reduced to one-way controlled traffic due to geographic instability. No injuries were reported, according to a Facebook post from the Del Norte Office of Emergency Services.

“Crews will continue to monitor the situation and have been working to repair some railing and fencing damaged by the slide,” Cochrane told the Wild Rivers Outpost via email Monday. “Because the events occurred within the limits of an ongoing project in the area, which already employs a temporary traffic signal, one-way traffic control will remain in effect and motorists should continue to anticipate 10-minute delays.”

The project required closing the highway at night for about five days last summer and will likely require another nighttime closure next spring, according to Cohen. Caltrans recently received $16 million to complete emergency work in the area.

Work also continues to re-route the highway around the landslide. While emergency repairs were underway in the summer, Caltrans brought drill rigs in to the area by helicopter and collected photogrammetry and LiDAR data. The agency will spend next year refining alternatives for a Last Chance Grade bypass.