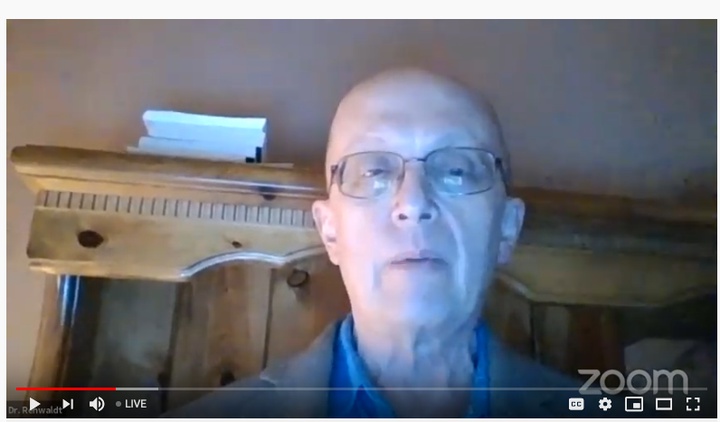 Dr. Warren Rehwaldt provides an update on the COVID-19 emergency in Del Norte County on Friday.

Travel doesn’t appear to be a factor in the second COVID-19 case to be confirmed in Del Norte County, its public health officer told the Wild Rivers Outpost on Wednesday.

Officials have also been unable to find a connection between that case and the first that was confirmed in Del Norte County last week, Rehwaldt said.

“With two cases it’s hard to conclude that it’s community spread, but my instinct says it probably in both cases was a community source,” he said. “When you get community spread it becomes impossible to trace things back, so we’re still classifying them as unknown.”

The second Del Norte resident, who tested positive for the novel coronavirus on Saturday, is an elderly woman, Rehwaldt said. She’s not hospitalized and is in the care of friends who are looking after her, he said.

The public health officer noted that while the pandemic has resulted in the relaxation of some of the rules associated with the Health Insurance Portability and Accountability Act, which governs the disclosure of patient information to the public, identifying the patient wouldn’t “change anything.”

“People wouldn’t change their daily routine by knowing the specifics about a person,” Rehwaldt said. “Even if you were a next door neighbor to someone who’s isolating, it doesn’t really change your risk. If you’re not in contact with that person face to face unprotected, there’s really zero chance of you getting the virus from someone who happens to be a neighbor down the street.”

A total of 135 COVID-19 tests have been administered in Del Norte County as of 8:48 a.m. Wednesday, according to the Public Health Branch. Four are pending and 129 have had negative results.

According to Rehwaldt, knowing if someone got sick from travel versus community spread is important because it helps health professionals determine if the virus can be contained. Not every contact is likely to produce transmission, but professionals can tell those who are close to the person who’s been infected to “be on the lookout,” he said.

“If you do that and you do that job thoroughly you can contain the effect of the case you’ve identified,” Rehwaldt said. “Once it’s in the community, though, and traveling back and forth between people, it becomes a nightmare to try and do that. There are so many directions transmission can be coming from and usually that point, you can’t contact people and try to contain the effect of the case you know about.”

In a letter to the community Monday, Rehwaldt noted that testing capacity hasn’t changed. New tests are being used in hotspots nationwide, he said. While the ability to get tests in Del Norte County is expected to slowly improve, officials are still reserving testing for those who either work in a clinical setting or live with someone who is at risk, Rehwaldt said.

On Wednesday, Rehwaldt told the Outpost that there are tests being developed that would allow public health officials to determine if someone was infected with the virus even if their symptoms weren’t serious enough for them to seek medical help.
Serological tests would allow doctors to determine if a patient has the COVID-19 antibodies in their blood stream, which confirms that he or she was infected, Rehwaldt said.

“Nobody should have antibodies to this virus if they haven’t had an infection,” he said. “As of last week, one company got emergency approval from the Food and Drug Administration for the test. It’s in high demand at the moment, so it’s impossible for us to get any.”

That test is more important for areas that have the most cases to understand the depth of their problem, Rehwaldt said. But everyone, particularly in Humboldt, Del Norte and Trinity, are doing a good job social distancing, it’s slowing the virus down, he said.
In his letter to the community, Rehwaldt illustrated the importance of sheltering in place by comparing New York and California.

Though it’s too early in the pandemic to predict what a surge in cases could look like in Del Norte County, Rehwaldt said they can make presumptions based the transmission of other viruses, like the flu. In a city with a dense cluster of people sharing the same space, infectious diseases spread faster, he said.

Despite its sparse population, professionals can’t assume COVID-19 won’t reach a peak in Del Norte County, Rehwaldt said. The great fear is that when it does, it would be more than the local medical system can manage, he said.

“There was an estimate of what would have happened in California if nothing had been put in place — if we just let the virus run loose,” Rehwaldt said. “They had estimated we would need 700,000 beds, which is about 10 times what the state is, which means that a lot of people would be sent home to either live or die.”

Though Sutter Coast Hospital, with a normal 49-bed capacity, can handle some overflow in a hurry, officials with the Del Norte County Emergency Operations Center are working to further increase that capacity.

On Monday, the Del Norte County Board of Supervisors approved a resolution giving the Department of Health and Human Services the ability to lease rooms at local hotels. This would provide a place for those who have the virus to quarantine themselves so they won’t infect a member of their household who may be at risk for serious complications.

Hotel rooms could also provide a safe place for those who are emergency workers or health care providers and need somewhere to live where infection is unlikely.

Rehwaldt, when asked about a potential risk to hotel staff, particularly those who have to clean rooms, said there would be training offered on ways staff can protect themselves. Another option is to have a professional cleaning company with expertise in suppressing infectious diseases clean the rooms that are leased, but, he noted that could be a stretch in Del Norte County.

Another way to protect staff would be for hotels to rotate the rooms that are in use, Rehwaldt said.

“Just leave them empty,” he said. “If you leave them empty long enough, the virus degrades and won’t become much of an issue. Then it’s much safer for the hotel staff to go in and clean.”

“There are a whole range of symptoms people are reporting, such as a sudden loss of taste or smell, headache and gastrointestinal symptoms such as diarrhea,” he said. “Now that we know the virus is here, people need to be mindful of what to look for if it reaches them.”