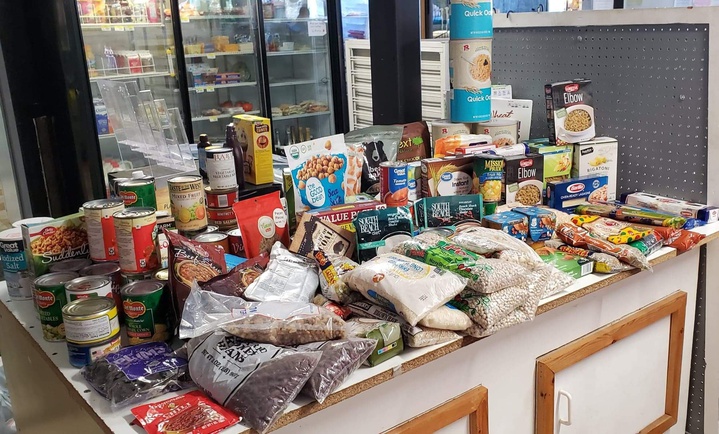 Thanks to donations from local residents, Cherece and Eric Norris are operating a small food pantry out of their business. Photo courtesy of Cherece Norris.

Cherece Norris says she and her husband have always dealt with crime, but break-ins at her business spiked when Hambro WSG stopped accepting people’s bottles and cans due to COVID-19 concerns.

This hasn’t stopped Cherece and her husband, Eric, owners of Park City Superette, from doing what they can to make sure their neighbors are taken care of during the local emergency.

“Our community pantry started after we were broken into,” Norris told the Wild Rivers Outpost. “With the recycling center being closed, people are unable to gather cans for food, or to support habits, and that created more theft. I get hungry after a few hours, so I can’t imagine days.”

Cherece and Eric grew up in the Bertsch Tract area south of Crescent City and grew up visiting the market at the corner of Elk Valley and Howland Hill roads. Cherece said she and her husband have operated a daycare at their home for more than 20 years, but when they saw the market was for sale in March 2018, decided to buy it.

When Hambro WSG stopped accepting CRV material late last month due to novel coronavirus concerns, Norris said someone cut their chainlink fence and stole a freezer. They put up surveillance cameras, but someone cut the lock off their dumpster.

According to Norris, a man broke into the store shortly after and took about $100 in grocery and caused another $400 in damages.

Despite the burglaries, Norris said members of the community have donated toward the food pantry. This includes a monetary donation of $300, she said.

So far, Norris said, she and her husband have given out three food boxes worth $50 each and also donated a $50 prepaid tab to the market.

Anything is welcome, but she said she has enough soup, ravioli, chicken, tuna and canned fruit. She said the best donations are cannned goods with pop tops, pointing out that some don’t have can openers.

“This food is available for anyone that is struggling,” she said. “The community has stepped up and with the help of everyone, a lot of people have been taken care of.”

Along with several community organizations, local business owners and individual Del Norters have taken it upon themselves to make sure their neighbors are taken care of during the COVID-19 pandemic. A Facebook group, Helping Our Neighbors in Need (Coronavirus) currently boasts nearly 2,660 members.

Created by Crescent City resident Megan May-Luks, who wanted to help and felt there were others who wanted to do the same, the group is a hub where people can trade mask patterns, let folks know what store is carrying toilet paper or offer humor during a tough time.

“Our community has pulled together,” Norris said. “It’s been amazing.”

As of 4:50 p.m. Monday, there have been two confirmed COVID-19 cases in Del Norte County, according to the Public Health Branch. A total of 176 tests have been administered. The results of 172 have returned negative while the test results for two are pending.

If you know a Del Norter who has reached out to their neighbors and community to help them through the COVID-19 emergency, let the Wild Rivers Outpost know by emailing jessica@wildriversoutpost.com.