Foundations Give $200,000 to Organizations Meeting Needs of Local Communities During COVID-19 Crisis »

Emergency Management — Del Norte Style: 'Everybody in the Community Has Done Something to Help Out' 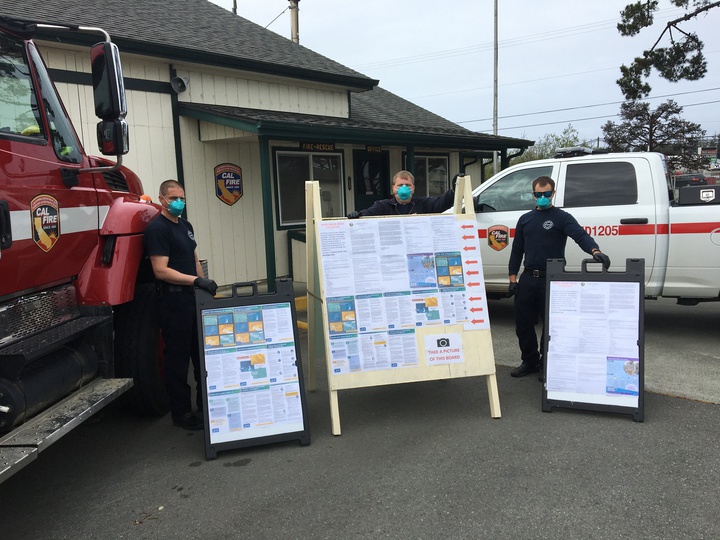 CalFire personnel show off examples of a trap line — informational billboards set up in several public places to inform about COVID-19. Photo courtesy of Kymmie Scott.

Four local hotels have answered a request for proposals to house those who need to isolate, quarantine or convalesce due to the novel coronavirus.

The Del Norte Emergency Operations Center’s operations team reviewed those bids on Thursday, Emergency Services Manager Kymmie Scott said. Those rooms aren’t yet needed, but Scott noted that it’s just one of many ways the EOC is handling an emergency the likes of which no one has seen.

“We’re working through some of the details with those bidders ‘cause there were some additional questions and additional vetting (needed),” she said. “We’ve got good responses and so that need will be met somehow.”

During a COVID-19-appropriate conversation with the Wild Rivers Outpost on Friday, Scott broke down the many facets of Del Norte County’s Emergency Operations Center. Acting as a hub to coordinate and allocate resources during an emergency or multiple emergencies, the EOC is currently at its highest activation. This means its major positions are staffed, nearly all of its support positions are staffed and roughly 40 people are working to get Del Norte through the emergency, Scott said.

The last time the EOC was at its highest activation — a Level 3 — was during the 2011 tsunami, according to Emergency Services Director Jay Sarina.

A pandemic is a different animal, Scott said.

“We’ve never been activated virtually, so that’s been a whole new experience,” she said. “We’re using a variety of tools like Google Groups, Google Docs, Zoom, email, phone, and the state’s got a program called CalEOC that helps us communicate with them. We’re using all of those tools to make this happen.” 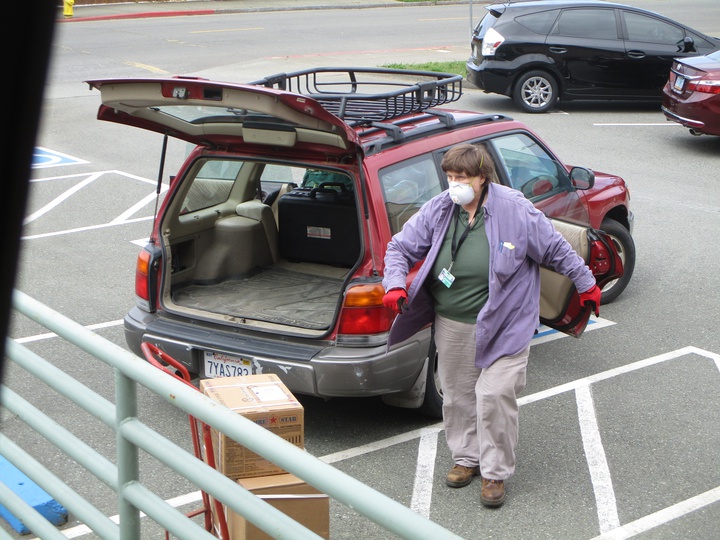 Much of the EOC’s role consists of coordination with a chain of command to keep things working smoothly. At the top are the directors — county administrators Jay Sarina and Neal Lopez; Crescent City Manager Eric Wier; Public Health Officer Dr. Warren Rehwaldt and Heather Snow, director of the Del Norte County Department of Health and Human Services.

As emergency services manager, Scott said she and her deputy are below the directors and are charged with managing the EOC.

There is also an information branch that works with local media and puts out informational billboards at Safeway, Walmart and other public locations.

A safety branch, meanwhile, ensures that EOC workers and volunteers are, not only keeping themselves safe from COVID-19, but are practicing self care.

“A lot of people are working around the clock,” Scott said. “The safety branch makes sure they’re getting proper rest, eating properly. Because there’s a lot of working from home, ergonomics, they make sure people have a work space set up appropriately. They’re in charge of making sure the people in the EOC stay in the fight and continue to get the work done.” 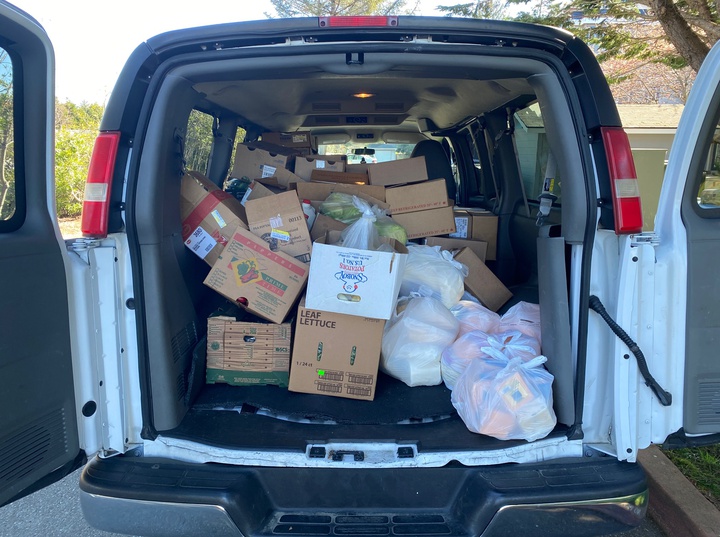 Food and supplies are loaded up to be taken to the Del Norte Senior Center. Photo courtesy of Kymmie Scott.

Then there are the EOC sections, which deal with supply acquisition; finances from the state and federal government to buy those supplies; planning, which deals with issues like food insecurity and shelter; as well as operations.

According to Scott, the operations side of the EOC is its most visible aspect. It’s what people see and, probably, care about the most, she said.

Part of the operations’ task is to set up provisions for the care and shelter of a large number of people. This is where the local hotels come in, Scott said, as well as creating a place at the Del Norte County Fairgrounds that could potentially take the pressure off Sutter Coast Hospital to house those who may be unable to go home.

“We already have an MOU for other disaster scenarios,” Scott said referring to the fairgrounds. “But for this one, and again, this is a worse-case scenario plan, but we want to be ready in case that happens.”

Another part of the mass care and shelter needs has to do with setting up bathroom stalls and showers for the unsheltered population, Scott said. Local law enforcement and firefighters are also helping to bring those who are unsheltered information about potential resources they can access during the pandemic.

The EOC isn’ just a county endeavor. There are a myriad of volunteers working with the Community Emergency Response Team, the Disaster Animal Response Team and True North Organizing Network.

“I would tell you I have four super volunteers in constant communication with the EOC and are directly overseeing projects for us,” Scott said. "But they have reached out and brought on CERT members. The CERT core team consists of a dozen or so CERT members that continue to train monthly. They’re all highly involved in the process and they reached out and paged the larger CERT group, a few hundred people, to find out who is willing to respond to this."

Even people who are most at risk of illness can help man the telephones, Scott said.

Meanwhile CERT has tied in with True North Organizing Network who is working to reach out to roughly 2,500 people who are most vulnerable in Del Norte, she said. The goal is to help distribute food and supplies to those who aren’t able to leave their home, she said.

Using $25,000 in California Endowment dollars, True North established a Neighbors Helping Neighbors volunteer group. Their goal is to hire three to five people to reach out to those who are most at risk, including those in tribal areas, the Latino community and the Hmong community.

“We especially want to find and target young people both for paid positions, but also for volunteer roles,” True North Lead Organizer Kevin Malone said last week. “We know that younger folks are moving through this better than us old folks.”

Then — though it’s not tied to the EOC — there are those sewing masks, like retired teacher Kathy Williams and CASA Executive Director Christine Slette.

Williams heard about the shortage in personal protective equipment and since her mother is at Addie Meedom House, made some for the residents and staff there. After she posted a picture of one of her masks on Facebook, she began getting requests, so she kept making them. When finding elastic became a problem, Williams said District 2 Supervisor Lori Cowan searched Amazon and found a 144-yard spool of the stuff.

“It’s the biggest amount of elastic I’ve ever seen,” Williams said, adding that she’s willing to share if any other mask-makers need some. “I do have friends that have been helping by cutting out fabric or cutting out and providing fabric for me. I can get five done in about 45 minutes now that I’ve got an assembly line process.”

Williams said she puts out 10 to 20 masks a day and puts them in the entry way of her home in a bag with the recipient’s name on them.

According to Williams, Addie Meedom began taking precautions early in the pandemic. This includes limiting visitors and quarantining the residents’ mail.

Slette said she’s made 64 masks so far and has requests for 40 more in both Del Norte and Humboldt counties. Former Crescent City Councilor Kelly Schellong requested masks for her son’s unit in the military, Slette said. She said she has several different patterns, though Old Glory is the most sought after.

Slette learned to sew from a woman named Kim Stevens when she was in high school. This includes knowing how to make bias tape, which means Slette’s masks don’t have elastic.

Slette said she’s fortunate that someone taught her how to sew and she’s now using those skills to give back to the community, though she's still doing her regular job.

“I took a day off on Tuesday so I can make masks because I have so many people requesting them now. I’m trying to fit it into my evenings or on the weekends,” she said. “I’m not charging anybody for the masks, but everybody’s been donating money so I can replenish the material. I thought that was really nice.”

Scott pointed to those making masks, collecting and distributing food, noting that even though a pandemic is scary, especially because it’s hard to know what’s coming next, Del Norte get through it.