From Pump Tracks to Labyrinths, Del Norters Share Their Vision For Beachfront Park 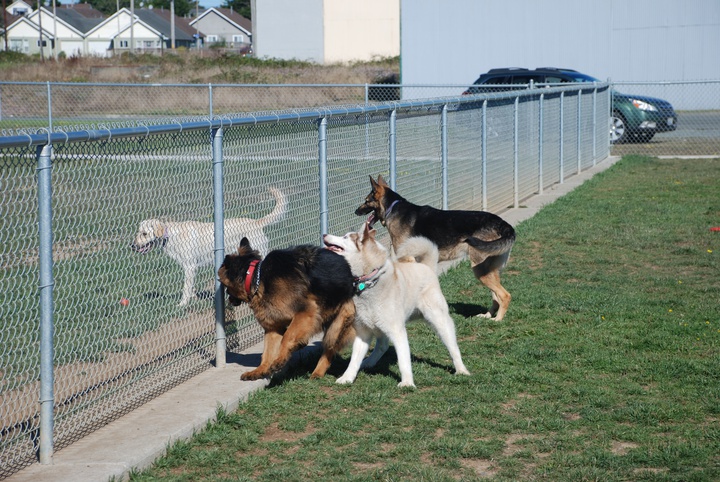 From pump tracks to labyrinths to Bankshot Basketball, Del Norte County residents shouted out their vision of a future Beachfront Park.

In the first of two town hall meetings Tuesday, Crescent City staff urged those who attended not to hold back on ideas. They also encouraged the community to name potential partners for projects as well as future events they think should be held at the park. Staff also offered residents a chance to air concerns about safety at the park.

This meeting and the second scheduled for Tuesday is a requirement for a non-competitive $200,000 Proposition 68 grant the city is pursuing, Recreation Director Holly Wendt said. The money can be used for one project or a combination of projects, she said.

“It’s non-competitive,” she said of the Prop 68 grant. “That means if we meet all the requirements, we get it.”

Wendt noted that many local residents have already been instrumental in creating the Beachfront Park Master Plan in 2011 and 2012.

Proposition 68, the Park, Environment and Water Bond, was approved by California voters in June 2018. It authorized $4 billion in general obligation bonds for state and local parks as well as environmental, water infrastructure and flood protection projects.
Following the upcoming Tuesday meeting, a third meeting will be held Oct. 15 to narrow down ideas to a project the city will use its $200,000 grant on, Wendt said. That project will go before the Crescent City Council for approval in November, she said.

However, Wendt said, all ideas will be used for future funding opportunities.

Other funding sources have come from the California Endowment, which awarded about $20,000 to the city for outreach. The California Coastal Conservancy also contributed $90,000 for development of the coastal trail, signs and beach access projects, City Manager Eric Wier told the Crescent City Council on Sept. 3.

On Tuesday, Wier said the city also takes donations for specific projects. Though it created the Beachfront Park master plan in 2012, the city isn’t “married” to any of the proposed amenities, which include an amphitheater and other forms of “active recreation.”

He said any donations for a specific project idea will be put into a bucket for that project.

The first idea came from Sheryl Steinruck. A former employee at the Del Norte Indian Welfare Association, Steinruck said that organization investigated establishing an interpretive center at Beachfront Park that would focus on the local tribes. Though the Del Norte Indian Welfare Association hired an architect, that interpretive center never happened, she said.

“Possibly (in) a little amphitheater, (we could) have dance demonstrations and basketweaving demonstrations,” she said. “Things that show you guys who we are locally as Indian folks.”

Joe Gillespie, founder of the Del Norte Trail Alliance, that advocated for establishing a pump track at Beachfront Park. A pump track is a circuit of rollers, banked turns and features designed for bicyclists. Gillespie said a pump track would draw visitors and locals and could be used by anyone from 2-year-old kids to “kids at heart.”

“The Trail Alliance would put on events to encourage the community to get out and ride,” he said.

Though a pump track is for bicycles, Gillespie said he often sees skateboarders use it.

“Everyone gets along just fine,” he said.

Gasquet resident Nancy Powers represented another local group advocating for the inclusion of a labyrinth at Beachfront Park. Based on World-Wide Labyrinth Locator, waterfront labyrinths are huge draws, she said. Plus, it offers a healing space for people to reconnect with themselves, she said.

Debbie Corning and Ron Radison aired their concerns about people who are camping in the park. Corning said people are making a mess in the park’s restrooms, while her grandchildren have been nipped at. She said she’d like to see more of a police presence at Beachfront Park.

Wier also referenced the 9th Circuit Court of Appeals ruling in the Martin v. Boise case about a year ago that stated it’s unconstitutional to arrest someone who’s camping on public property when there’s no other shelter readily available.

“Unless we have a shelter with available beds we can’t tell them to go,” he said. “ But if you need something, say something. Harassment is not OK. Beachfront Park needs to be a safe place for us all.”

In response to another resident who said a dog had bitten him when he was at Beachfront recently, Wier said the city is updating its leash law. He encouraged people to report any unsafe incidents to the police or to Crescent City public works employees.

It was Crescent City Mayor Blake Inscore who extolled the virtues of Bankshot Basketball, urging folks to take a look on YouTube.

The mayor also addressed residents’ concerns regarding people camping at the park and said the more visitors it draws may serve as a deterrent for those who would possibly pitch a tent. Inscore also assured that he and other city elected officials hear residents’ concerns about the homeless issue.

Getting back to Bankshot Basketball, Inscore said the Children’s Museum of Memphis introduced the sport to their community and it’s become a major draw for its visitors.

“We need something that people can come to that, it doesn’t matter if you’re an old guy like me who’s more grandfather than father and certainly more than he is son,” Inscore said. “If miniature golf met a basketball hoop, that’s what this is. It’s not about competition.”

The second Beachfront Park town hall meeting will be held at noon-1 p.m. on Tuesday at the Crescent City Cultural Center, 1001 Front Street in Crescent City.