From Pump Tracks to Labyrinths, Del Norters Share Their Vision For Beachfront Park » 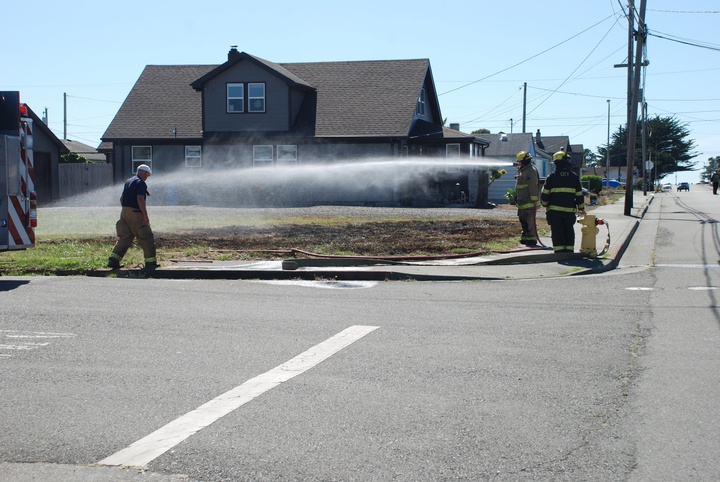 Crescent City Fire and Rescue firefighters train hoses on a scorched bit of grass at 9th and B streets after a downed power line started a small fire Thursday. Photo: Jessica Cejnar

Crescent City residents found themselves without electricity for the second time Thursday when a power line went down near 9th and C streets.

About 1,438 customers were without electricity at about 2 p.m., according to Pacific Power spokesman Tom Gaunt.

The power line ignited a small grass fire at a vacant lot on 9th and B streets in Crescent City. Crescent City Fire and Rescue responded at about 2:19 p.m., said Fire Chief Bill Gillespie. Residents in the area were training a garden hose on the blaze when firefighters arrived, he said. They succeeded in extinguishing about 3/4ths of the fire, Gillespie said.

There were no injuries, Gillespie said.

According to Gaunt, power is expected to be restored at about 4:30 p.m.

A previous power outage affected about 96 Crescent City customers at about 11 a.m. Several people reported on Facebook that they had heard pops. Gaunt said those pops were blown fuses and crews with the utility were still trying to determine what caused them.

Gillespie noted that people should keep away from downed power lines.

“It’s not dead until the power company confirms it’s dead,” he said. “IF you see a line down, don’t touch it. Stay away from it.”