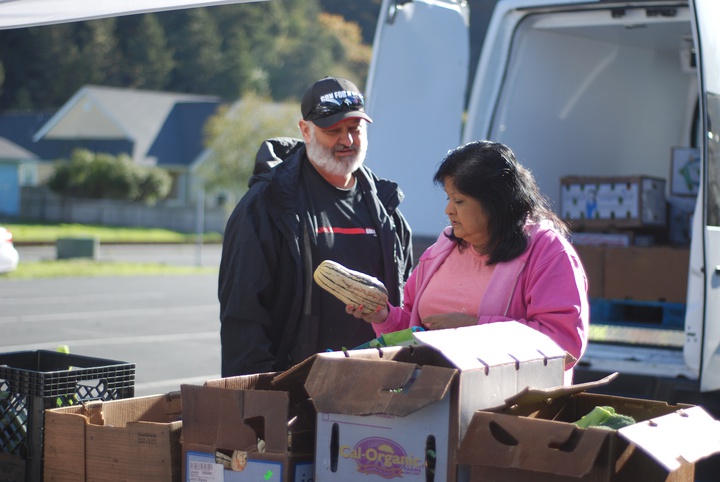 Leona Charles struggled to contain the contents of her box while keeping an eye on her pug, Cheek Sue.

Though she only had a block to walk, Charles wanted to get her vegetables home before they wound up on the streets of Klamath. She said she got a little of everything from Food For People’s Mobile Produce Pantry on Tuesday — beets and yams for the good antioxidants; a bag of potatoes and a handful of apples. Charles said she’ll turn it all into juice and use the left over pulp.

“I think this is exciting,” she told the Wild Rivers Outpost. “There are four people working — that’s somebody putting their money where their mouth is.”

Matt Drummond, community garden planner for the Redwood Community Action Agency, accompanied them with literature about gardening, the CalFresh program, and the market match program at local farmers markets.

Seeber said it was Drummond’s idea to tack a Klamath visit on to the Mobile Produce Pantry’s October itinerary.

Though the plan to stop in Klamath was relatively last minute — word went out to residents just a week prior — they showed up.

“I love it!” Veronica Downs exclaimed, saying she’ll eat just about anything. “This is awesome!” 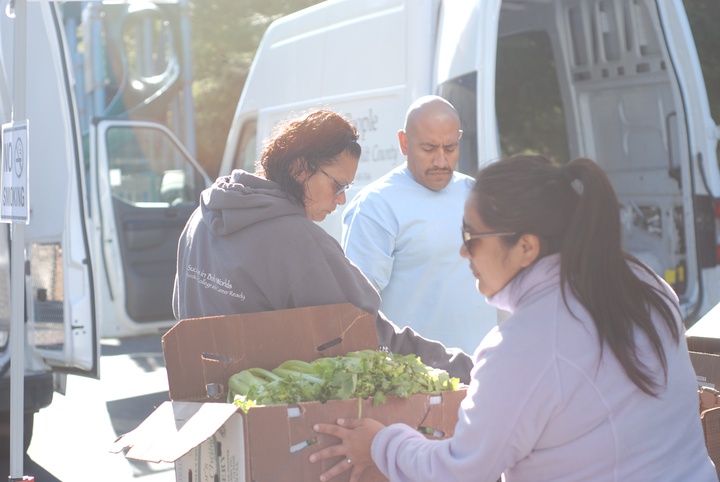 Seeber, Mobile Produce Pantry coordinator for the Humboldt County-based food bank, said most of the produce he brought with him came from local farmers. He and de la Cruz ask folks how many are in their household, supply them with produce bags and encourage them to take a little of everything, though there is a limit to the amount they can take.

Food For People’s Mobile Produce Pantry make stops to the outlying areas of Humboldt County as far east as Orleans and as far south as Redway. Seeber said he especially likes visiting areas that don’t have the variety of produce available in more populated areas.

The Mobile Produce Pantry is typically a way of encouraging people who are eligible to sign for CalFresh benefits, though since Klamath is in Del Norte County, Seeber said they weren’t enrolling residents in the program.

This month, Food For People had some flexible funding and an extra week available to do a “pop-up pantry” distribution in Klamath, Seeber said. On Wednesday, he’ll bring the Mobile

Produce Pantry to Manila, saying that though it’s close to Eureka, a lot of residents don’t have cars.

Seeber said he’s hoping to make the Mobile Produce Pantry a monthly fixture for the community.

“We go to Orick once a month,” he said. “I thought we could move the Orick distribution earlier in the day, pack up and do it for two hours here. It’ll ease the financial burden of the program.”

According to Seeber, the amount of produce he’s able to distribute depends on the average number of people that visit the pantry. In Orick, he said, there’s a consistent stream of about 35 clients who take 10 to 15 pounds of food with them.

Food for People’s local food resources coordinator who orders from local farms will then call around to see what’s available, Seeber said. Autumn is when local produce is most abundant, he said.

“We grow incredible produce,” he said. “Here it’s more about seeing a need and covering that need here today.”

“We like vegetables,” she said. “We don’t know about the green stuff, but we’re going to try it.”