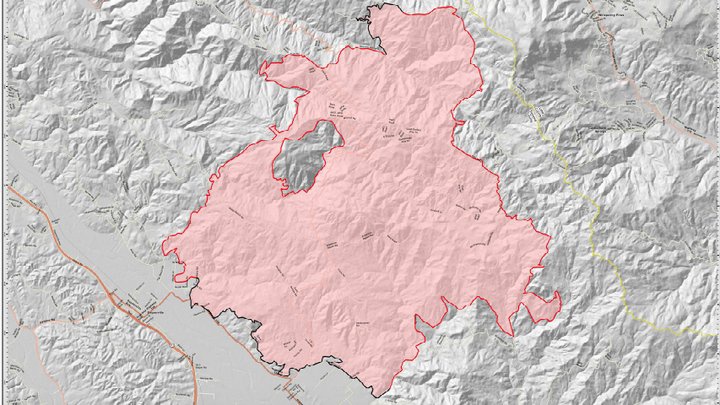 The Kincade Fire burning in northeastern Sonoma County is 66,231 acres in size. Ignited Wednesday, the fire has destroyed 96 buildings and is threatening 79,675 others, according to CalFire. Fire map provided by Calfire.

Del Norte County may have escaped the wildfires and power outage plaguing much of the state, but its emergency personnel are helping communities that haven’t been so lucky.

Pelican Bay State Prison has sent a fire crew to help with the Kincade Fire, Emergency Services Manager Kymmie Scott told the Wild Rivers Outpost on Monday. Several leaders with Crescent City Fire and Rescue have gone with them.

Cal-Ore Lifeflight has sent personnel and equipment south, Scott said. Del Norte Ambulance sent two vehicles down that way, responding to a request from Sonoma County, but since another agency also responded, their ambulances were turned around Scott said.

“There also has been a whole lot of requests for bed counts through our region as they’ve evacuated hospitals and skilled nursing facilities and elderly homes,” she said. “We’ve been giving them regular bed polls, information on what space is available at our hospital, skilled nursing facility and senior living center.”

In Del Norte County, those facilities include Sutter Coast Hospital, Addie Meedom House and Crescent City Skilled Nursing, Scott said.
Scott’s office has also been working with the Humboldt County Department of Health and Human Services to provide help who rely on electricity for medical devices, though don’t need to be hospitalized.

“We helped them find rooms at one of the local hotels,” she said. “We’ve also facilitated introductions with Sutter Home Health and our DHHS staff as (offered) as much support as needed for these folks.”

Scott said her office was initially requested to help find alternative housing for about 50 people, but Blue Lake Rancheria also stepped in to provide support.

Meanwhile, though her school isn’t immediately threatened by the Kincade Fire near Geyserville, Samantha Fuller said she and other students were evacuated from Sonoma State University 30 miles away on Saturday evening.

Fuller, who graduated from Del Norte High School in 2018 and is a sophomore at SSU, said she left campus at 8:30 p.m. Saturday and arrived home in Crescent City on Sunday. She said she knows that five freshmen from Del Norte County have left the residence halls, while many Del Norte students who live off campus are still in the area.

According to an email Sonoma State sent its students Monday, though the school isn’t under immediate threat, classes, business operations and events have been cancelled. The residence halls and buildings have also been locked, according to the email Fuller forwarded to the Wild Rivers Outpost.

Sonoma State is expected to be closed through Tuesday, though the school told students to brace for more power outage as well as variable air quality.

“They update us at least once a day,” Fuller told the Outpost.

Though the campus isn’t in danger, Fuller said the power outages and fire has also impacted her classes.

“We had school cancelled two to three weeks ago and it’s set back a lot more now,” she said. “They keep saying it’s not in danger.”

Though Del Norte County still has power, Scott reminded residents that they should take the electricity outage in Humboldt as a sign to be prepared for when things go dark here — especially as the rainy season approaches.

“Usually for us, the beginning of the rainy season is the worst,” she said. “Trees die or get weakened over the summer months and the first big storms inevitably knock trees over and branches over and take out power.”

People should stock up on emergency supplies, including making sure their medical, kids’ and pets’ needs are met, Scott said. They should also make sure their generators are maintained, she said.