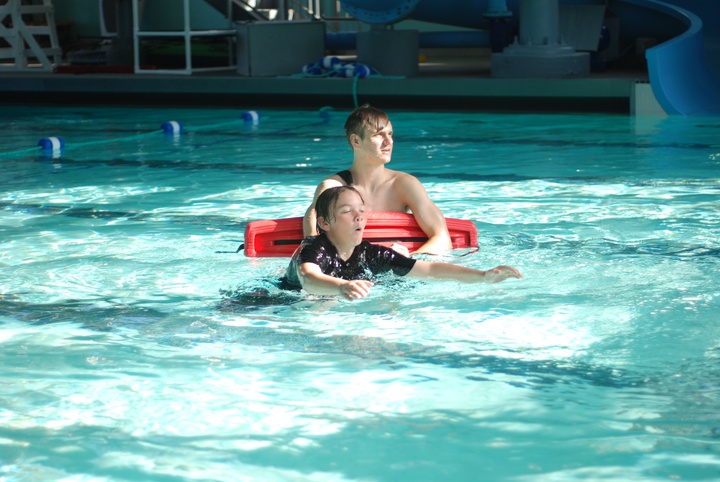 Colton Strnad works with a 4th-grader from Bess Maxwell Elementary School during the first of six lessons the district and city are offering local students. Photo: Jessica Cejnar

Colton Strnad assured his charges that being apprehensive was OK.

“I don’t expect you to be comfortable with everything,” the lifeguard told his students, fourth-graders at Bess Maxwell Elementary School.

For some youngsters, venturing into the Fred Endert Municipal Pool wasn’t a big deal. Others shivered as they inched their way along the side, one hand on the wall. But Martha Albro pointed out that since it’s inevitable her students will come into contact with water, especially in Del Norte County, it was important they be comfortable with it.

A partnership with the district and Crescent City, the program started Monday with seeing what skills the youngsters brought to the pool.

“The kids range from being afraid to being on the swim team,” Enos said, adding that for those who have never been to the pool, the goal is to get them to float on their own. “There’s a real range to their skills.”

The series of lessons will include survival swimming skills, including how to throw a rope buoy and how to get someone out using a pole, Albro said. They’ll also brave the deepend to learn life jacket safety, she said.

“It gives a good basis for water safety,” Albro said. “In our county there are a limited number of activities for school age children outside. This is an activity they can participate in as young people and possibly for the rest of their lives.”

According to Albro, the district initially partnered with the county and offered swim lessons to fifth-graders in 1970. Their goal was to “water-proof” the kids, she said.

The program began with 10 days of lessons, then it was cut to six and then five, Albro said. Now, students participate in six lessons, three each week, she said.

“It encourages students and parents to take the full set of lessons through the pool,” she said. “These six lessons make a difference.”

The emphasis on water safety is also extended fifth-graders when the district partners with Search and Rescue, the Coast Guard and other rescue agencies to hold demonstrations at the Crescent City Harbor, Enos said.