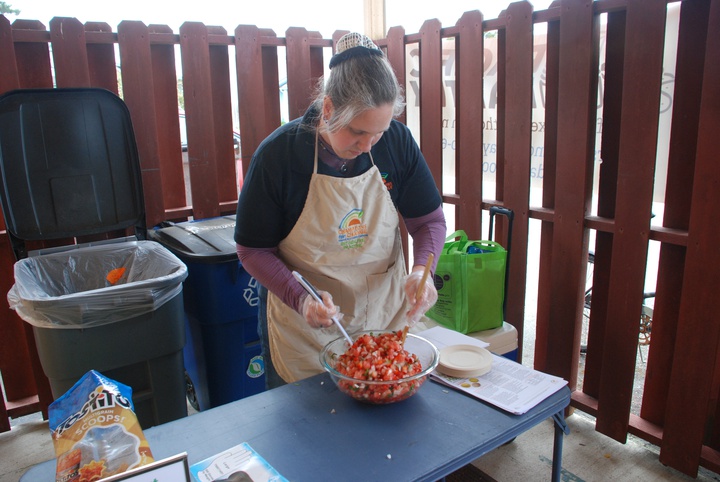 Though Pacific Pantry continues to distribute food, it was unable give its clients the shopping experience last week that made it different from other local food banks.

Due to the loss of its Community Development Block Grant dollars on Friday, the pantry gave out bags of cereal, milk, pasta and canned vegetables, Community Food Council Program Director Amanda Hixson said. However, the organization plans to use a $300,000 grant from Cal Recycle and California Climate Investments to bring choice back to the pantry and “rescue” Del Norte’s food from the landfill.

The Food Council will also launch a fundraising campaign next month to raise money for Pacific Pantry, Hixson said. This will include crowdfunding, holding an “empty soup bowl” fundraiser and selling cranberries and cranberry sauce using berries gleaned from bogs near Bandon, Oregon on Saturday.

The Community Food Council entered into an agreement with Crescent City about two years ago to receive about $150,000 in CDBG dollars to run a food bank. The Food Council opened Pacific Pantry for the first time in April 2018. Rather than giving clients boxes or bags of food, the pantry offered them the ability to shop among a plethora of healthy choices from each food group.

The pantry has served 23,075 people since it opened in 2018, including repeat visitors, Hixson said. In September, it served a record 603 clients, she said. The Community Food Council’s CDBG funding officially ended on Friday. The organization had to submit its last receipts to Crescent City on Oct. 21, Hixson said.
The Food Council won’t be able to reapply for CDBG funds for a year, she said.

“Going from a monthly budget of $20,000 a month to $0 a month was a big shift,” Hixson said, adding that the pantry had been stocked with fruits and vegetables, dry goods and dairy. “If we didn’t have the CalRecycle grant, the pantry would probably be closed right now.”

Since CalRecycle gave the Community Food Council notice to proceed with its food recovery project on July 22, the organization hired Meredith Knowles to be food recovery coordinator. The organization’s goal is to divert more than 400,000 pounds of food from the landfill by the end of the project on April 1, 2021.

Del Norte County throws away 3.9 million pounds of food a year, Knowles said. The goal is to intercept it while it’s still edible and redistribute it to areas with high levels of food insecurity. While much of that food will come from local restaurants, Knowles and Hixson said they will also rely on produce gleaned from peoples’ orchards and gardens.

Knowles said she just brought about 1,000 pounds of apples to Joe Hamilton Elementary School to be pressed into cider.

However, both she and Hixson say much of the food that will be rescued will come from local restaurants, particularly those with buffets such as Marlo’s Greek and Italian restaurant. While food safety may be a concern, Knowles said the food will be kept at a temperature that’s safe and will be handled using safe practices as well.

Hixson also noted that business owners needn’t be concerned about potential liability if they donate to the Community Food Council.The Bill Emerson Good Samaritan Food Donation Act, signed into law by President Bill Clinton in 1996, protects restauranteurs from liability when they donate to a non-profit organization, she said.

“I envision a lot of the food put into bags and into the freezer at Pacific Pantry,” Hixson said. “It’s a win-win all around. It fits in with one of our big goals and it’s perfect timing.”

The Community Food Council will also use part of its CalRecycle grant to purchase a vehicle with a built-in refrigeration system. Knowles said they’ll use the vehicle to rescue food and keep it at safe temperatures until it can be repurposed.

Hixson said she also wants to use the organization’s vehicle to set up a mobile grocery store to bring locally-grown produce to the outlying areas of the community. She said she envisions such an operation to work on a sliding scale to accommodate those who can pay full price, those who can’t and those who rely on Supplemental Nutrition Assistance Program benefits.

Hixson said the community will not only be able to help by donating to the Community Food Council during its fundraising campaign in November. They can also donate to the Family Resource Center of the Redwoods by shopping through Amazon Smile instead of Amazon, she said. Hixson said she’s hoping to raise about $20,000 to $25,000 next month.

Knowles said those who have produce and other food that can be rescued should reach out to her. She and Hixson noted that a new law, Senate Bill 1383, may give businesses leverage to donate food they would otherwise throw out. SB 1383 is a new state law that requires at least 20 percent of food to be recovered for human consumption.

“Many hands make for light work,” she said.

Cranberry gleaning for the Pacific Pantry will be held from 10 a.m.-1 p.m. Saturday. People are asked to meet at the Port Orford Co-op, 812 Oregon Street in Port Orford. People can also meet at 8 a.m. to carpool from the Family Resource Center, 494 Pacific Ave. in Crescent City. For more information, call (707) 464-0955 extension 2108 or email alanctot@frcredwoods.org. Click here to RSVP.