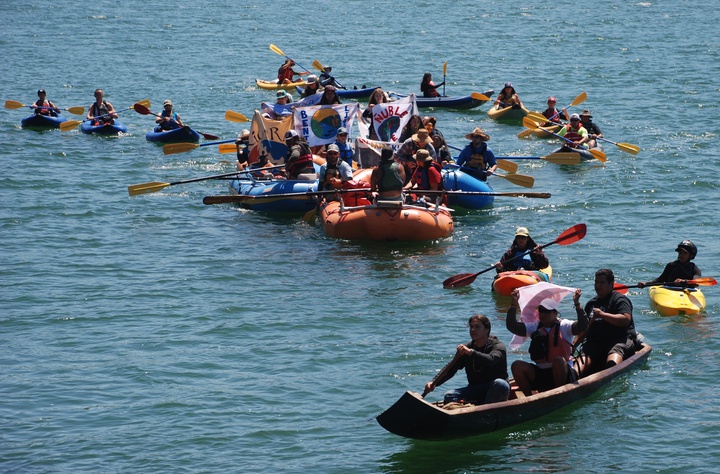 “I will fight until my last breath for it.”

Nicole Cuqui stood with 17 other young activists at the mouth of the Klamath River on Wednesday. She had completed a float downstream from Happy Camp, meeting Yurok youth at the village of Sregon. But it was the threat of mega dams on her own watershed, Bolivia’s Rio Beni, she thought of when she declared her willingness to fight.

“We live in the Amazon, so it’s very fragile,” Cuqui said. “If they build these dams they will damage all the things that live there.”

Cuqui joined youth from her home country as well as Chile, Myanmar and the United States, including members of the Klamath-based nonprofit the Ancestral Guard, in the third Rio to Rivers international exchange. The program’s ultimate goal is to bring youth representing 22 different watersheds to witness dam removal on the Klamath River in 2022, said Executive Director Weston Boyle.

Seven different watersheds were represented when Rios to Rivers brought their rafts and kayaks to shore at the mouth of the Klamath River on Wednesday. It was the culmination of a three-week journey that started on the Elwha River, the site of the largest dam removal project in the United States, Boyle said.

When they reached the Klamath River, the travelers put in at Happy Camp and rafted to Soames Bar. They met Ancestral Guard founder Sammy Gensaw III in a redwood canoe at the Yurok village of Sregon and stayed near Ah Pah Creek before arriving at the river’s end. 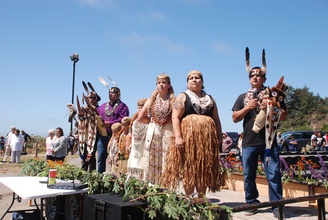 Peter Gensaw said he visited Chile in February, where he heard stories of how the indigenous people the rights to their rivers.

There, the rivers are so pristine, Gensaw said, he could drink from them; something he would never do at home. But the people are striving to keep corporations from installing mega hydroelectric dams on their rivers, he said.

“There are so many similarities,” he said. “No matter how far we are from each other — different countries — the youth still have one problem, dams on the river. That’s one of the main reasons we come together.”

Since Rios to Rivers’ last visit to the Klamath River basin about two years ago, the program is working to expand its reach and get more youth involved in advocating for their own rivers, Boyle said.

The program strives to bring together young adults whose rivers are still flowing free from dams with those who are fighting to restore their own streams, he said.

Rios to River’s exchange comes as the Klamath River Renewal Corporation, the nonprofit tasked with dam removal on the river, made a key submission to the Federal Energy Regulatory Commission on Monday.

KRRC representatives also announced that the start-date for 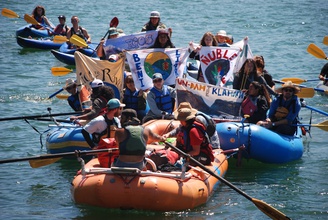 Rios to Rivers finishes its second float down the Klamath River on Wednesday. Photo: Jessica Cejnar

draining the reservoirs and starting the project will be January 2022. According to Sammy Gensaw, representatives of the nonprofit organization spoke with Rios to Rivers travelers about the dam removal project.

“This whole event has been organized around indigenous resistance and the political response (to dam removal),” Sammy Gensaw said. “The fact of the matter is it takes longer to get approval for dam removal than it actually does the process of removing them.”

Victor Vera, of Chile, and Alex Villca, of Bolivia, hope to see the Klamath River free of dams when they return to the United States.
Vera said his experience rafting downstream has inspired him to oppose development on the Nuble River in his own country.

“I’m happy to have met indigenous people in Klamath,” he said in Spanish. “I’m feeling spiritual power in these people.”

Like Cuqui, Villca represented Rio Beni, one of two major river basins in Bolivia and part of the Amazon River watershed. Four hydroelectric dams are planned for the Rio Beni basin, said Villca, a member of the Uchupiamona nation. Two will affect his homeland on the Tuichi River, a tributary of the Rio Beni, he said.

Villca compared the Amazon River with the Klamath, noting that both support fragile ecosystems that are important to everyone.

“The Amazon is a very important bond in our life. If we just cut it, that’s very damaging,” he said, adding that there are other ways to generate electricity and income for his people. “It’s the same here.”