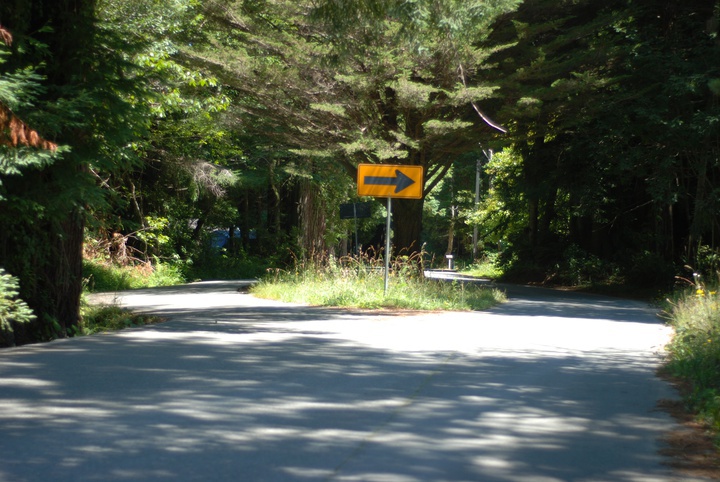 Wonder Stump Road residents hope to get answers about the future of their street at a community meeting next week. Photo: Jessica Cejnar

Their street has drawn media coverage and spawned petition signatures and Facebook posts from across the country. Now Wonder Stump Road residents are setting their sights on a public meeting.

Despite the attention, including an article in the Los Angeles Times that also appeared in the San Jose Mercury News, Donna Eller said she and her neighbors aren’t sure what the county’s plans are for the canopy of redwoods that shelters their road. She told the Outpost that she hopes to get answers from county staff on Dec. 12.

Eller also hopes to get as many people to show up as possible.

“I just don’t know if there’s a developer,” she told the Wild Rivers Outpost. “I still say there’s a reason we’re not finding out about (it)… We’re just not being told anything.”

In the July 22, 2019 letter, Community Development Director Heidi Kunstal told residents that maintaining the road while allowing for motorist travel is no longer safe for workers. The “oversize one-lane road serving two-way traffic” hinders emergency vehicles and school buses. Trees along the street’s paved surface and shoulders also bear scars from being hit, according to the letter.

Roads superintendent Jeff Daniels told the Outpost in July that the county has no intentions of harming Wonder Stump's tree tunnel.

In July, staff began assessing current road conditions on Wonder Stump. Preliminary “conceptual alternatives” were anticipated in September or October and stakeholder and community meetings were planned for November and December, according to Kunstal’s letter.

On Monday, Kunstal told the Outpost via email that the process for preparing the planning document hasn’t changed.

“We look forward to gathering more public input,” she told the Outpost.

Even though the county’s plans for Wonder Stump Road have yet to be determined, Eller founded the Save Wonderstump Facebook group shortly after receiving Kunstal’s letter in July. It currently has more than 1,100 members, she said, who use it as a place to update those who are interested as well as to share ideas from other communities that have faced similar issues.

In addition to the Facebook group, Daniel Russ, a Reno, Nevada man with ties to Del Norte, started a change.org petition. In July, Russ told the Outpost his goal was to get 1,500 people to sign.

On Monday, Eller said nearly 5,800 people have signed it.
The petition also has about 6,000 supporters, she said.

Wonder Stump Road was once part of the Hobbs, Wall & Co. rail line that brought people from Crescent City to Smith River and back for 75 cents, according to a May 4, 1891 flyer.

The road was named after the Wonder Stump, remnants of a tree that was growing on top of another tree that fell more than 1,000 years ago. The Wonder Stump had been a tourist attraction for more than 50 years, according to an Aug. 1, 2009 article in the Curry Coastal Pilot by Arwyn Rice.

Following a second set of public meetings, county staff will present a summary of the feedback it received to the Del Norte County Board of Supervisors in May or June 2020.