ODOT Reopens 101 South of Port Orford; Landslide Repair Work At the Mercy of the Weather 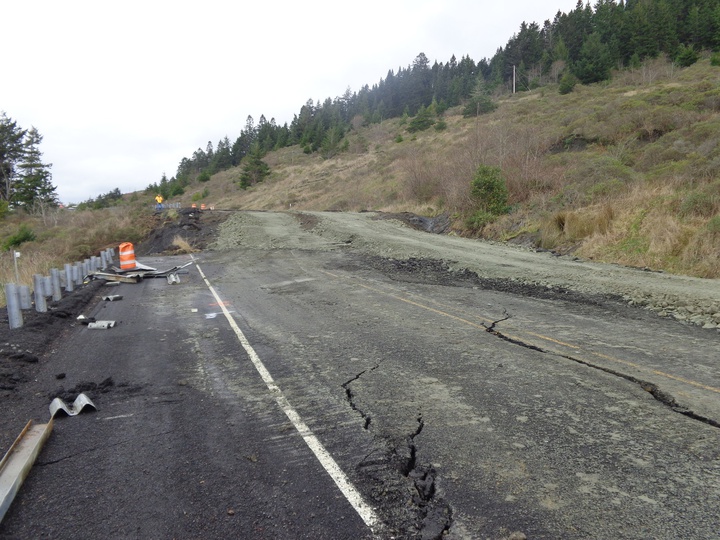 Oregon transportation officials reopened U.S. 101 as of about 2:16 p.m. Friday, according to Tripcheck.com, warning motorists that sunken pavement is causing “minimal delays to traffic.” They were asked to use caution.

Curry County Emergency Management recommends motorists use Interstate 5 as an alternate route around the slide until closures are not a possibility. Local emergency officials also ask drivers to steer clear of USDA Forest Service Roads, particularly if they’re in an RV, commercial vehicle or a truck hauling a trailer.

Flaggers will guide drivers through the area known as the Arizona Slide, about 12 miles south of Port Orford, though Noble said he wasn’t yet sure if it would be staffed 24-7.

Motorists still expect delays and reduced speeds through the area.
A landslide that’s been “raising heck” since the 1980s, the Arizona Slide ultimately caused about 200 yards to sink by 15 feet and move to the west by roughly 12 feet, Noble told the Outpost.

ODOT closed the highway down entirely when it sank by 5 feet at about 3 a.m. Monday. The road continued to drop through mid-morning and slowed by about noon, an ODOT news release Tuesday stated.

“We really started working in earnest making the temporary lane on midday Wednesday and that was after geotechnical engineers had taken measurements,” Noble said, adding that engineers had measurements from 12 and 24 hours to see how far the landslide had moved. “Their conclusion was the slide had slowed down significantly enough where it was safe to construct the temporary lane.”

Curry County first notified ODOT that the Arizona Slide was beginning to move when they were told that large cracks had formed in the pavement on Jan. 2. ODOT patched the cracks, but a hole formed in the northbound lanes before Monday's collapse, according to a department news release.

According to Noble, though there have been “pop-outs here and there” — a few yards of fallen rocks and debris the department typically clears from the road within a couple hours — the Arizona Slide is currently ODOT’s most significant weather-related concern.

The Arizona Slide is one of about 13 landslides ODOT will identify in an overall study that is expected to be released in the spring, according to Noble. In addition to figuring out how to stop or reduce their recurrence, the study will identify potential detours around the landslides it focuses on, according to a virtual Open House the department held in the summer. 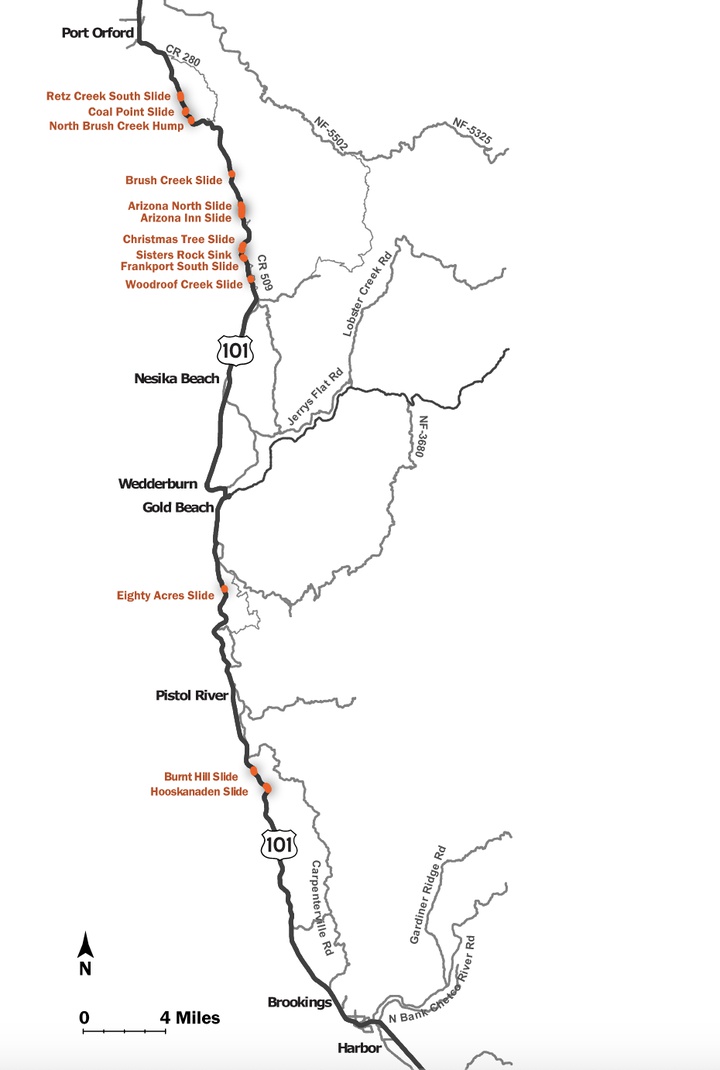 The Arizona Slide is one of about 13 landslides that will be included in an ODOT study this spring. | Image courtesy of ODOT

According to a fact sheet from ODOT, in addition to the Arizona Slide — which last shuttered 101 entirely in 1993 — there are 10 other landslides near Humbug Mountain it’s monitoring between Port Orford and Ophir.

The Eighty Acres Slide between Pistol River and Gold Beach is another the study will cover. According to ODOT’s fact sheet, it has a long history of closing southbound lanes on U.S. 101, but hasn’t completely closed the road yet.

There’s also the Hooskanaden Slide north of Brookings that most recently prompted the full closure of the highway in 2019. That landslide moves about 2.5 feet a year, Noble told the Outpost.

The Hooskanaden Slide is also the culprit of road closures in 1977 and 1995, while the nearby Burnt Hill Slide resulted in a full highway closure in 2005, according to the fact sheet.

Once the study is finished, it’s possible that ODOT will approach mitigating the landslides on a case-by-case basis, determining whether it can slow the slide down and making sure the preferred detours are able to accommodate lighter vehicles, Noble said.

“Then you get into things like shipping and trucking,” he said. “I was talking to a Fred Meyer shipping guy in Brookings, who asked ‘When can we get our trucks through?’ You won’t be able to do that until (the highway) is reopened. There are a lot of detour routes. The question becomes what can we do to make them safe and passable for lots of trucks carrying critical supplies, groceries and other things.”