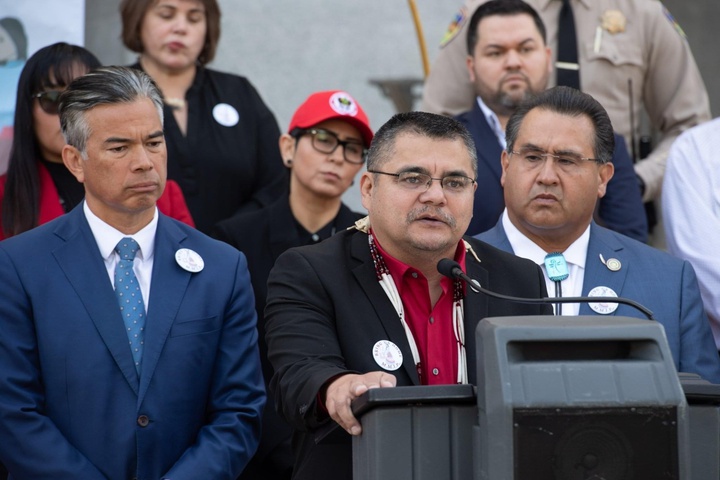 On Tuesday, October 4, the Yurok Tribe will host the first-ever statewide policy summit on Missing and Murdered Indigenous People (MMIP).

The 1st Annual Northern California Tribal Summit on MMIP will bring together tribal leaders, law enforcement officials and MMIP survivors as well as state and federal lawmakers, academic researchers and victim advocates to identify solutions to stop the crisis. Starting at 8:30am, the summit will take place at the Arcata Community Center in Arcata, California.

“The crisis of missing and murdered Indigenous people has touched every tribal citizen in California and throughout the United States. This has gone on long enough. The time for action is now,” said Yurok Chairman Joseph L. James. “The purpose of this summit is to develop a series of mutually agreeable actions that tribal, federal and state stakeholders can take in the short- and long-term to protect Indigenous Californians.”

“The epidemic of missing and murdered Indigenous people is a national humanitarian crisis, with California ranking fifth in the nation for incidents of MMIP, and the far north of the state accounting for most cases,” said Yurok Tribal Court Director Jessica Carter. “This extremely complex issue requires cooperative solutions that transcend political boundaries. We also need to amend antiquated state and federal policies, which limit tribes’ abilities to respond to the crisis.”

At the summit, tribal leaders and other subject matter experts from all parts of the state will discuss the historical and present-day root causes of the MMIP crisis in conjunction with remedies to reduce risks to Indigenous people. U.S. Representative Jared Huffman, State Senate Majority Leader Mike McGuire and Assmeblymember Jim Wood will inform tribes about what the federal and state governments are doing to stem this indelible issue.

“While the epidemic of missing indigenous people spans the country, tribal members in Northern California are particularly affected by a status quo of inequity, complicated and ineffective policy, and a lack of focus by government agencies charged with protecting them,” said Rep. Jared Huffman, CA-02. “This tribally led
summit should be a catalyst for change at every level and help begin to comprehensively address this pervasive problem.”

“Every missing or murdered indigenous person deserves our full attention and compassion and their families deserve our action,” said Assemblymember Jim Wood who represents five counties in Northern California. “For too long, these tragic cases have not received our focus and require significantly improved coordination and transparency by law enforcement and the judicial system with the Tribes. The final report published by the To’ Kee Skuy’ Soo Ney-Wo-Chek’ Project provides an important roadmap for moving forward to address the cases of missing and murdered indigenous people as well as the many underlying causes. I am grateful for the leadership of the Yurok Tribe, and for the support of Humboldt Sheriff Honsal and others as we look for actionable ways that will allow all stakeholders to work together to maximize their capabilities while respecting Tribal ways.”

“This crisis has been hidden for far too long. It’s unacceptable. I’m grateful for the tireless leadership of the Yurok Tribe along with local tribal leaders for advancing strategies that will save indigenous lives,” Senate Majority Leader Mike McGuire added. “This first annual summit will ensure a bright light is shown on this dark issue. I’m ready to get to work and look forward to partnering with North Coast tribes to make the MMIW crisis a priority across the state.”

Tribes throughout the US are contending with MMIP crises. Homicide is the third leading cause of death for Indigenous women and girls. In some Tribal communities, Indigenous women face murder rates that are more than 10 times the national average. California has the fifth largest quantity of Missing and Murdered Indigenous People cases in the US. A majority of cases occur in Northern California. More often than not, the perpetrators are non-native. In December of 2021, the Yurok Tribe declared an MMIP emergency.

The 1st Annual Northern California Tribal Summit originated from a pivotal July 12 tribal briefing convened by Yurok Chairman Joseph L. James to lay the groundwork for a unified response to the MMIP crisis in the state. More than two dozen tribal leaders, representing tribes in every corner of California, joined the strategic dialogue.

The Tribal leaders are considering a series of state and federal policy amendments to remove systemic inequities and empower tribes to confront the crisis.

In large part, the policy summit will be informed by three years of research and reporting on the topic through the Yurok Tribal Court’s To’ Kee Skuy’ Soo Ney-Wo-Chek’ project. Supported by the Humboldt Area Foundation and Wild Rivers Community Foundation, the tribe-centered summit is an extension of the work that has been led for many years by Tribal Nations and Indigenous organizations, leaders, advocates, researchers, and communities.

“We are committed to partnering to end the humanitarian crisis of MMIP. This tragedy has plagued the North Coast of California, and stolen women, children, two-spirit, and other Indigenous people from our communities for decades. Perpetuating this agony, Native American families experience added suffering due to underfunded justice and healing systems for these crimes. We support and will follow the leadership of Tribal Nations and Indigenous leaders to take responsibility for these lost lives in our community,” said Bryna Lipper, CEO Humboldt Area Foundation and Wild Rivers Community Foundation.