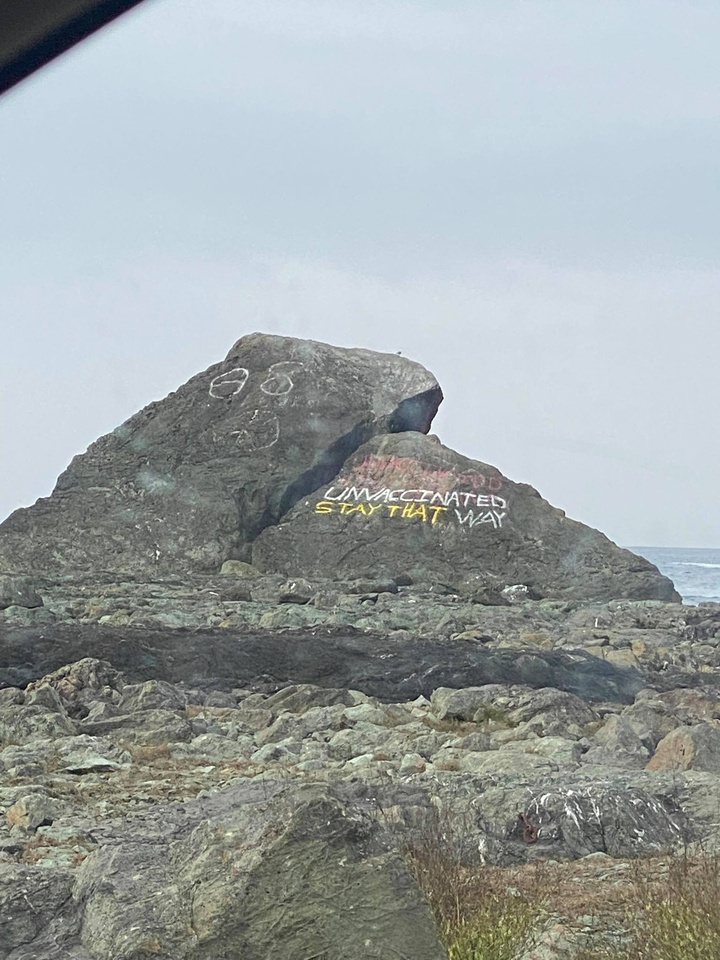 Pebble Beach Drive resident Heidi Kime took this picture of graffiti on the rocks near Preston Island, not far from her house in October 2021.

County supervisors are expected to finally adopt an ordinance Tuesday that restricts overnight parking at Preston Island and other areas in Del Norte County.

If approved, the rocky spit of land off Pebble Beach Drive straddling the Crescent City limits will be closed to parking from 11 p.m.-5 a.m. Other areas that will be closed during that time include Bertsch-Oceanview Park, the Klamath Glen and Klamath Townsite boat launch facilities, Mouth of Smith River access area, Never Dying Redwood and the Pike Field Sports Complex.

The Board of Supervisors got their first look at the proposed changes to the county’s parking ordinance for Preston Island on Sept. 13. This was after Crescent City Councilors on Sept. 8 decided against closing the access road to the parking area, directing staff to formally meet with the county to address complaints of criminal activity in the area.

According to District 2 Supervisor Valerie Starkey, the county has scheduled a “two-by-two” meeting with the city next month to discuss Preston Island.

“If people want to park up on the access road, the city’s kind of made it clear they don’t want to restrict it,” Starkey told the Outpost on Monday. “But down in the parking lot area, in order to assist law enforcement, that’s the option the county chose. I wish the city and county would coordinate and talk, but we’re two different entities and that’s just how it works out.”

Changing the county ordinance so it carries a specific time period when parking isn’t allowed was meant to solve the vandalism and crime problems, Starkey said. She pointed out that the 11 p.m.-5 a.m. closure was consistent with the city’s parking restrictions at Beachfront and Howe parks.

According to Assistant County Administration Officer Randy Hooper, the City Council’s Sept. 8 decision to take no action regarding closing the Preston Island access road at night is consistent with the practical implementation of the county’s parking ordinance. While overnight parking is restricted at Preston Island and the other facilities listed, people can still drive in and out and turn around, he said.

“The county ordinance does not regulate access to those properties including at Preston Island where the access road is within the city’s jurisdiction,” Hooper told the Outpost in an email Monday.

During earlier meetings between city and county officials, law enforcement requested the uniform standards so CCPD and the Del Norte County Sheriff’s Office could work cooperatively in each jurisdiction, Hooper said. Previously, the county code defined overnight as “any portion of the period between sunset of any given day and sunrise of the following day.”

On Sept. 8, Griffin told Councilors that residents on Pebble Beach Drive weren’t reporting the criminal activity they had been seeing near Preston Island. He also pointed out that the parking area was outside his jurisdiction and, until recently, CCPD didn’t have permission to patrol the area.

Councilors Beau Smith and Blake Inscore opposed closing Preston Island overnight. Smith said people visit to fish for eel and surf perch early in the morning. Others will go out to look at the stars late at night, he said.

Inscore said he felt law enforcement hadn’t been given the chance to address residents’ concerns. He said he was also concerned that closing the area to overnight parking would push those camping into other Crescent City neighborhoods.

The Del Norte County Board of Supervisors will meet at 10 a.m. Tuesday in the Flynn Center, 981 H Street in Crescent City. To participate in the meeting via Zoom, click here.