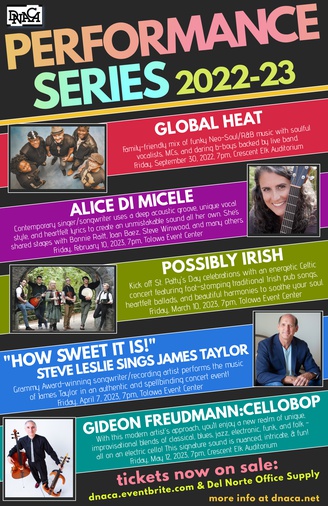 Global Heat and Dog Pound will bring their brand of urban dance to the Crescent Elk Auditorium next week, kicking off Del Norte Association for Cultural Awareness's concert season.

The Seattle-based musical group and the b-boy crew that performs alongside it will perform at 7 p.m. Sept. 30. Earlier that morning, Global Heat and Dog Pound will be at Sunset High School for an outreach among the students, DNACA Executive Director Stephanie La Torre said.

Global Heat has toured festivals, theater concerts and other events since 2006. They were formed as a collaboration of international musicians whose members have performed worldwide including in Japan, Thailand, Australia, Malaysia and Vietnam.

Dog Pound — also known as Vicious Puppies — has been recognized as "one of the hottest breakdance groups in the country, and maybe even the world," according to King Country Broadcast in 2012. Founded in 2008, Dog Pound has appeared at Paramount's "Dance This!" and at the Sasquatch Tour.

Other artists to be featured in DNACA's 2022-23 performance series includes singer-songwriter Alice Di Micele in February and Possibly Irish to celebrate St. Paddy's Day. Grammy Award-winning artist Steve Leslie will sing James Taylor in April and Gideon Freudmann will perform CelloBop in May.

Tickets are on sale at dnaca.eventbrite.com or at Del Norte Office Supply.