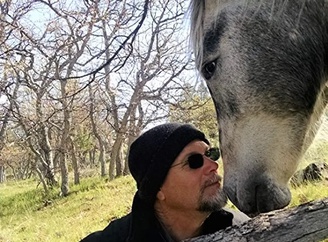 • Boice Believes Horses Are Native to Curry County and Can Help Fight Wildfires, but His Colleagues are Unpersuaded

I appreciated the opportunity to address the citizens of Curry County through this board of Commissioners presentation.

It's most unfortunate for the majority of citizens of Curry County to suffer under the rule of a minority consensus group, apparently led and organized by Tim Palmer, whose bombastic presentation presented nothing in the way of scientific citations that supported his obsolete and absurd conjectures.

I respect Commissioner Court Boice. Not because he’s willing to allow people from my nonprofit to speak to a tiny County in Southern Oregon, we already have numerous national media outlets doing that.

I respect Boice because I see a man who is working hard and studying the latest science and forest management concepts in order to protect the health, safety and welfare of the citizens who elected him. This is in stark contrast to his antagonist Commissioner Chris Paasch, who like Tim Palmer is clearly mired in dogma that is steeped in obsolete politicized science stemming from the 1950-1960 period.

It's the same kind of mindset that people and politicians had when Galileo argued the earth wasn't flat, and was nearly burned at the stake for his correct round-earth teachings.

By his own words, Commissioner Paasch demonstrated the kind of backward ignorant thinking that has damaged the economy of Brookings Oregon and Curry County over the past two years, which now has the County operating under, I am told, a $5-million deficit budget!

“Mature horses on complete hay diets can consume up to 2.25 percent to 2.75 percent of their body weight in hay on a daily basis. Therefore, in situations where hay is full fed and highly palatable, a mature 1,200 pound horse can consume about 30 pounds of hay per day.”

As is evident, Commissioner Paasch is grossly ignorant in his knowledge as to how much dry forage even a domestic horse requires daily.

Then, in order to somehow qualify his incorrect statement on how much horses eat, he makes a Wild Exaggeration stating he owns a ranch and has trained “thousands of horses.”

Of course, as we now see, whatever horses Paasch may have had were being starved by his own admission of feeding only 7-pounds per day. Unless he forgot to tell us that on his ranch he was training miniature horses, which weigh an average of 200-pounds and they eat about 4-7 pounds per day.

As far as the Pinocchio sized whopper “I trained thousands of horses”, Chris Paasch takes the prize!

The all-pro full-time horse trainers, who I know, can reasonably train 8-12 horses each year. And assuming for the moment that Mr. Paasch was a full-time pro horse trainer (he’s not) and was engaged in that profession for the past 40-years continuously, he could havetrained 480 horses on the high end, NOT “thousands” as he stated.

Then Mr. Paasch tries to sell the idea that ‘indigenous burning’ is the way to manage wilderness areas to prevent wildfire. Nothing could be farther from the truth, and relying on old myths, based on an oral tradition that has a maximum shelf life of 100-years to protect citizens natural resources and private property is absurd.

And we have the science and empirical experience that proves that concept is a Native American Fairy Tale [2, 3]

Mr. Paasch’s understanding of science and natural history is demonstrably pathetic, and that is coupled with extreme exaggeration, which may by fine in a poker game where someone is trying to foolothers at the table into thinking they have a better hand when they have nothing… as is this case with Mr. Paasch…

The tragedy in all of this is that Curry County Citizens and their heath, safety, well being and economic interests are seriously jeopardized by the small-mindedness of Mr, Paasch and people like him.

The grass and brush fuels reduction plan known as Wild Horse Fire Brigade works, it was actually tested by a deadly 38,000 acre wildfire (Klamathon Fire – 2018), and is supported by published peer-reviewed science.

2. Mythologizing the Practice of Burning by Native Americans

William Simpson is a wild horse ethologist, founder and chairperson of the Wild Horse Fire Brigade.