An American widgeon is one of 220 species of birds that visit Lake Earl. | Photo courtesy of California Department of Fish and Wildlife

Members of a new group representing local duck hunters hope for some answers at an upcoming public meeting regarding what they say are efforts to shut them out of the Lake Earl Wildlife Area in favor of dune restoration. 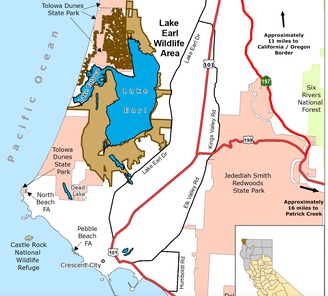 The Lake Earl Wildlife Area will be a topic of discussion at a California Department of Fish and Wildlife meeting on Oct. 18. | Map courtesy of CDFW

Jeff Reed, a member of the Del Norte Waterfowlers Association, said state wildlife officials closed the south end of Lake Tolowa two days a week and the first Sunday of the month last season without notifying the public.

However, Sandra Jerabek, director of the Tolowa Dunes Stewards, said last season was the first time that she has heard of duck hunters being unable to hunt near Lake Tolowa due to dune restoration efforts.

The volunteer organization has been working with the California Department of Fish and Wildlife for years under permits the department obtained to eradicate invasive European beach grass in the Lake Earl Wildlife Area. Up until last season, Jerabek said, the Tolowa Dunes Stewards has had no conflicts with duck hunters.

“We support and respect duck hunting at the Lake Earl and Lake Tolowa,” she told the Wild Rivers Outpost on Monday. “I understand that is a very special area for duck hunters. I’ve had a duck hunter tell me that compared to the places he can hunt down south, this is very special and relatively wild."

Waterfowl season starts in mid-October and stretches through the end of January, Reed said. Meanwhile, the U.S. Fish and Wildlife Service states the Tolowa Dunes Stewards can only do their work between Sept. 15 and Feb. 15 so as not to disturb the endangered western snowy plover around their nesting season.

Reed said he found out about CDFW’s intention to close that area when another hunter text messaged him. A sign was posted at the site itself, roughly a mile from where most people launch their boats. But, he said, since motors aren’t allowed on the lagoon, it’s a 20-minute row to get to the area.

“I was told they weren’t going to lift the closures,” Reed told the Wild Rivers Outpost, adding that he spoke with CDFW Northern region Lands and Wildlife Program Supervisor Shawn Fresz and Environmental Program Manager Jeffrey Stoddard. “One of my other suggestions they took to heart was that on the days the Dune Stewards couldn’t work, the hunters wanted to have that communicated to them so we could go out there and hunt. The state never came up with an efficient or an effective way to communicate with hunters. Their basic response was, ‘We’ll tell you, Jeff, and maybe you can tell the other hunters.'”

CDFW’s public outreach meeting Oct. 18 will focus on the 6,100-acre wildlife area that encompasses the coastal lagoon of Lake Earl and Lake Tolowa. According to Fresz, CDFW officials will discuss public access at the Lake Earl Wildlife Area, Fresz told the Outpost. Ongoing efforts to eradicate European beach grass and an update on how all CDFW lands in Del Norte County are being managed will also be addressed, he said.

However, while Fresz acknowledged that there is conflict between dune restoration and duck hunters, it’s “not my intention to mediate some argument,” he said. The hunting closures are temporary and intermittent, he said.

“Clearly we manage our lands for all users including hunters and restoration,” Fresz told the Wild Rivers Outpost. “It is really critical that we conduct restoration on state lands. That will be addressed.”

After attempting to speak with CDFW officials, Reed said he was able to “do a little trading” on times and days he and other waterfowlers can hunt. He also obtained information about the Tolowa Dunes Stewards’ restoration project through several California Public Records Act requests, including a copy of California Coastal Commission permit and their project notes and is now questioning whether the narrow timeframe CDFW officials told him that work can be done is necessary.

Reed said the only response he received was from CDFW Northern Regional Manager Tina Bartlett, who told him the Oct. 18 meeting “will serve to notify and receive comment from the public” on the continued restoration as well as the “small temporary closures” to provide safe working conditions to volunteers and comply with the project’s permits.

“CDFW is committed to providing a more transparent closure process in the future…” Bartlett told Reed.

The Tolowa Dunes Stewards has been eradicating European beachgrass from roughly 34 acres of foredunes at the mouth of Lake Tolowa, according to a Sept. 16 letter from Bartlett to Reed. And for the first time in 28 years, western snowy plovers are attempting to nest in the project area, Bartlett said.

“The dune restoration project is a multi-benefit project that has helped many plant and wildlife species, strengthening the area in the face of climate change and providing valuable and lasting benefits to the surrounding community,” she wrote.

The Lake Earl Wildlife Area encompasses two lagoons connected by a deep channel known as The Narrows and bordered by saltwater and freshwater marshes. Sand dunes extend inland from the Pacific Ocean covered with scattered beach grasses and other vegetation. Wildlife found in the area include quail, grouse, canvasback, western grebe, coastal black-tailed deer and beaver, according to a CDFW news release.

The Lake Earl Wildlife Area also houses the western snowy plover, listed as threatened under the federal Endangered Species Act, and the sand dune phacelia, which is being considered for federal protection.

Though the Tolowa Dunes Stewards has been working to eradicate European beach grass since 2010, initially supporting California State Parks’ efforts at nearby Tolowa Dunes State park, work in the area that plovers are currently nesting in began less than two years ago.

For that project, CDFW used grant money to pay for botanical surveys, cultural surveys and geomorphology surveys, Jerabek said. The department also had to get a Coastal Development Permit since heavy machinery would be used in the restoration work, she said.

“There are surveys conducted during the non-breeding and breeding seasons by authorized professionals,” she said. “They have to give us the OK before we go work anywhere and when the plovers are nesting, we have to remain a great distance from any nest. We just don’t work in that area while they’re nesting. There are other areas to work in.”

CDFW's meeting will be held from 3 p.m.-5 p.m. Oct. 18 at Howonquet Hall, 101 Indian Court in Smith River. The meeting will also be held via Microsoft Teams. For a meeting link and instructions on submitting comments and questions, email Shawn.Fresz@wildlife.ca.gov.