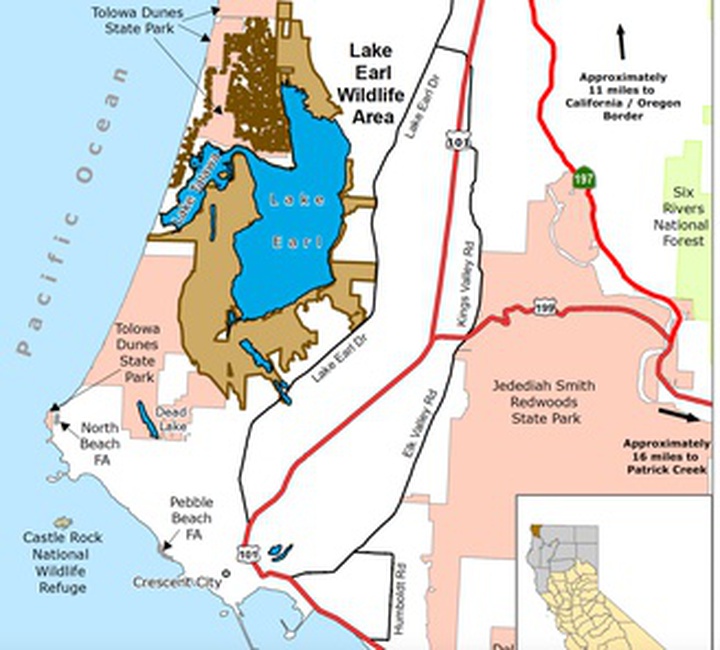 Acting on behalf of a local group of duck hunters, the Del Norte County Board of Supervisors agreed to send a letter to the California Fish and Game Commission opposing a petition to close the Lake Earl Wildlife Area to hunting.

Jeff Reed, a representative of the Del Norte Waterfowlers, asked supervisors to consider taking up the issue as an urgency item on Tuesday. The petition — authored by Randal South, who owns property near the Lake Earl Wildlife Area — will go before the Fish and Game Commission on Dec. 14, which is also the date of the next Board of Supervisors meeting, Reed said.

The Board of Supervisors voted 4-0-1 in favor of sending that letter, as well as reaching out to California Department of Fish and Wildlife and Fish and Game Commission representatives. District 1 Supervisor Darrin Short was absent.

Though his group spoke out in opposition at a California Department of Fish and Wildlife meeting in Smith River last month about a hunting closure near South Lake Tolowa for dune restoration, Reed said South’s petition calls for closing all 6,100 acres.

“The intent today was not to re-explore the closures on the south end of Lake Tolowa because if the entire lake is closed to hunting, it doesn’t matter,” Reed told the Wild Rivers Outpost.

On Oct. 28, CDFW announced an intermittent hunting closure near South Lake Tolowa from Nov. 1-Nov. 18 and from Jan. 2 through Jan. 24 to avoid conflicts with ongoing efforts to eradicate invasive European beach grass.

The LEWA Coastal Restoration Project consists of 98 acres near the mouth of Lake Tolowa. The area closed to hunting is about 70 acres and represents 1.5 percent of the “legal hunt zone,” CDFW Lands and Program Supervisor Shawn Fresz said in an Oct. 28 email.

In his comments to the Board of Supervisors on Tuesday, Reed noted that Del Norte Waterfowlers members submitted 277 comment forms opposing hunting closures at the CDFW’s Oct. 18 meeting.

Reed told the Outpost that his group is still considering what to do about the South Lake Tolowa closures.

In his petition to the Fish and Game Commission, South, who operates a youth hostel adjacent to the CDFW-managed area, said his guests often complain about gunshots during hunting season. They can’t walk to the end of his property “without concern about getting shot by duck hunters,” he said.

South also accuse hunters of not taking home what they kill, and in an online petition through Care2, he says the dead birds he’s found also include endangered species.

“The whole concept of hunting on a taxpayer supported Wildlife Refuge defeats the purpose of having the wildlife refuge,” South states in his online petition. “The California Department of Fish and Wildlife has a conflict of interest because they receive money from hunting licenses which supports staffing and officers to visit the lake.”

South also proposed replacing the process of breaching Lake Earl to alleviate flooding with a solar-powered, pump-driven electric aqueduct. He argues that the county’s use of a bulldozer to open up the sand bar at the mouth of the lake has increased the salt level in the lagoon.

“(This) is evident by the dying plant life that surrounds the lake including the death of large coniferous trees on its perimeter,” South states. “Other concerns are potential contamination to the underground aquifer, which many residents are dependent on since most of the county is on well water.”

Reed called South’s statements “all kinds of craziness.” Killing endangered species is illegal, taking an animal and wasting it is illegal and hunting within 150 yards of a structure is illegal, he said.

The Lake Earl Wildlife Area is not a wildlife refuge, Reed said, referring to a statement South makes in his petition. The 6,100 acre land that encompasses lakes Earl and Tolowa were purchased with Pittman Robertson Act excise taxes levied on hunting and shooting gear that is collected by the federal government and distributed to states.

“There are all kinds of regulations that exist and are enforceable if CDFW can enforce them,” he told the Outpost. “Where’s the documentation that something was or wasn’t done about these issues? To just go from one (photo) and somebody’s saying they saw someone shoot an endangered bird to close the entire area to hunting is just absurd.”

An agenda for the Fish and Game Commission’s Dec. 14 meeting is expected to come out Nov. 23, according to Reed. Written comments can be submitted by 5 p.m. Dec. 1, though late entries are allowed by noon Dec. 9.

On Tuesday, District 3 Supervisor Chris Howard said Reed’s comment was the first time he heard of a petition to close the entire Lake Earl Wildlife Area to hunting. He said he spoke with CDFW Director Charlton Bonham who made no mention of a petition.

“Generally these are the kinds of things he would bring up,” Howard said. “I’m concerned about something like this gaining traction without the government-to-government consultation we have in instances like this.”

Howard asked Assistant County Administrative Officer Randy Hooper to reach out to CDFW representatives at the regional and state level as well as with Fish and Game Commission staff.