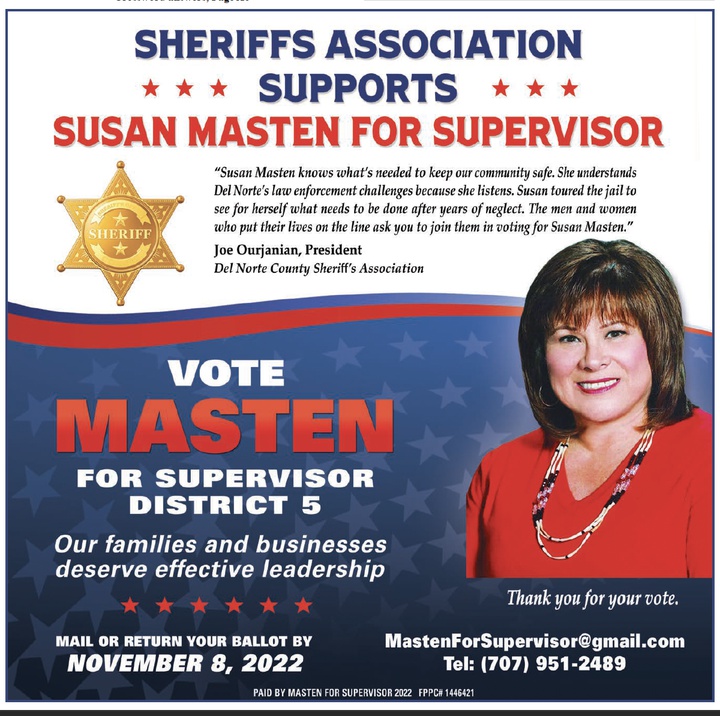 Del Norte County Sheriff's Employees Association representatives says it did not authorize this advertisement endorsing Susan Masten for county supervisor. The ad appeared in the Oct. 21 issue of the Triplicate.

Members of the Del Norte County Sheriff’s Employees Association say they did not authorize an advertisement that appeared in the Oct. 21 issue of the Triplicate endorsing Susan Masten for District 5 supervisor.

The Del Norte County Sheriff’s Employees Association doesn’t endorse anyone for political office “unless we get 100 percent approval” by its membership, Stanley told the Wild Rivers Outpost on Tuesday

Twelve other members have also added their names to the Oct. 24 letter.

The DNCSEA’s former president, Joe Ourjanian, spoke on behalf of the association in that Oct. 21 ad, which Masten’s campaign paid for.

“Susan Masten knows what’s needed to keep our community safe,” Ourjanian states in that ad. “She understands Del Norte’s law enforcement challenges because she listens. Susan toured the jail to see for herself what needs to be done after years of neglect. The men and women who put their lives on the line ask you to join them in voting for Susan Masten.”

Masten said her campaign ran a similar ad before the June 7 primary election saying that the Del Norte Sheriff's Employees Association endorsed her and "nobody said anything at the time."

"That's what unions do," she said. "They advocate for their members by political advocacy and the Del Norte Sheriff's (Employees) Association endorsed me in the past and that's why I approached them in April and May and I was the only candidate to contact them. I think it's a couple of individuals who are supporting my opponent and they are pushing it to this level."

Masten, a former Yurok Tribal Councilwoman, was appointed to the Board of Supervisors by Gov. Gavin Newsom following the March death of her predecessor, Bob Berkowitz. Masten is running against former sheriff Dean Wilson in the Nov. 8 general election.

According to Stanley, the advertisement was a surprise to “everybody except one person.”

“We did not have a meeting, he didn’t ask us and we didn’t vote,” Stanley told the Outpost. “The only thing I could think to do since I couldn’t get that person to retract that (advertisement) was write a letter.”

According to Stanley, Ourjanian is no longer DNCSEA’s president. The association’s bylaws state “nobody higher than a sergeant” can hold a position on its executive board, and Ourjanian was made a temporary lieutenant over the summer, Stanley said.

Ourjanian’s name appears in another advertisement endorsing Masten that the Triplicate printed in its Oct. 28 issue.

On Wednesday, Ourjanian told the Wild Rivers Outpost that the controversy over the ad has prompted him to resign from being the DNCEA’s president.

“I don’t want to give anymore statements at this point,” he said.

Masten also spoke to Ourjanian's dilemma as the association's former president who endorsed her for supervisor.

"The president is a 33-year-long dedicated law enforcement officer and he doesn't deserve this kind of personal attack that's been on him either," she said. "He's a man of integrity and that's unfortunate."

According to her campaign finance reports, Masten has received a total of $24,931 in donations and contributions since she began running for office. This includes using $925 of her own money to fund her campaign, which was listed as an outstanding loan.

Masten’s largest donors include Dignity CA SEIU Local 2015, which represents long-term caregivers and contributed a total of $7,000 to her campaign. SEIU Local 1021 Candidate PAC and the Building and Construction Trades Council of Humboldt and Del Norte countis each donated $3,000 to Masten’s campaign.

The Yurok Tribe also contributed $2,000 to Masten’s campaign and formally endorsed her for supervisor in March.