U.S. 199 Through Jed Smith State Park to be Closed During Day Starting Next Week » 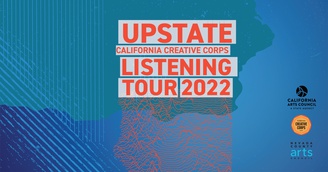 Tudor and Schneider, representatives of the Nevada County Arts Council, were in Crescent City on Tuesday to provide information about a new workforce development opportunity for artists and social service organizations.

They left learning that despite Del Norte’s rugged beauty, there’s a dearth of professionals and not just doctors. Housing is a challenge, which makes recruiting said professionals difficult. Residents are uninsured and many families are underprivileged.

“We have a lot of under privileged families,” said Sunny Gonzales, Crescent City’s human resources manager. “How can we bring the art to where it’s acceptable to our residents here?”

Armed with the California Healthy Places Index, Tudor and her colleagues were visiting Del Norte County as part of a listening tour of the 19 counties in the North State Region.

The California Creative Corps is the first program of its kind in the United States to come out of the COVID-19 pandemic, Tudor said. She compared it to the Works Progress Administration that sprung out of the Great Depression and President Franklin Roosevelt’s New Deal.

The $60 million in one-time general fund dollars allocated to the California Arts Council will be spread among 58 counties and “goodness knows how many unique regions,” Tudor said.

“We created this listening tour so we can visit some of the communities in the area we’re responsible (for) before we put the grant guidelines together,” she said.

The guidelines will advise applicants on how to frame their grant proposals, will help determine who is eligible and who might not be as well as what kinds of projects the Upstate California Creative Corps wants to promote, Tudor told the Wild Rivers Outpost.

Once their listening tour is finished, Tudor and her colleagues will meet with representatives of the arts councils in the Northern California region — including the Del Norte Association for Cultural Awareness — to develop those guidelines. The Nevada Arts Council has until early in the new year to put those guidelines in place, Tudor said. 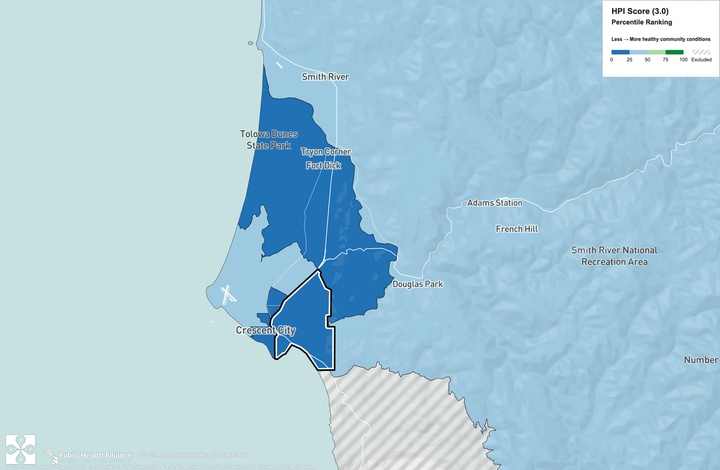 “There will be grants available directly to employ individual artists and then there will be grants that support collaboratives — numbers of artists working together,” she said. “Social service organizations and arts organizations similarly will be most likely distributing the funds for projects that support community priorities connected with the Healthy Places Index.”

The Healthy Places Index was created in 2018 by the Public Health Alliance of Southern California. The tool evaluates the relationship between key drivers of health and life expectancy at birth, including a neighborhood’s access to education, job opportunities, clean air and water. It produces a score ranking from 1-99, comparing the selected area on the map to other parts of the state.

According to Tudor, other states have adopted the Healthy Places Index tool, the latest of which is Utah.

According to Tudor and Schneider’s presentation Tuesday, with an average per capita income of $23,700 annually, Del Norte County scored in the 5.4 percentile on the Healthy Places Index overall.

“Del Norte has the lowest HPI score of all counties in the upstate region,” Schneider said. “What that means is 5.4 percent of California counties have a lower score than here.”

Tudor said their goal was to show artists the tool they’re using to evaluate and promote arts projects that could be part of the California Creative Corps.

Schneider also showed a map of the different watersheds in the North State as well as its history with wildfires, noting that “many of us don’t believe county lines determine how we should be approaching landscapes.”

Gasquet artist, Alicia Wilson, brought up the 2013 play “This is Crescent City.” Penned by College of the Redwoods English professor Ruthe Rhodes, the play explores the town’s often dark history.

Wilson said when looking at Del Norte County’s ranking on the Healthy Places Index, she thought of Rhodes’ play.

“It’s accountants and lawyers and veterinarians — everybody at the professional level,” she said, adding that she’s been urging the hospital and the Crescent City-Del Norte County Chamber of Commerce to join forces when it comes to recruiting people. “There are people that would love to be able to kayak every day, people want to go hike, people who want to live this life and we got to go out and sell what we have to offer as a lifestyle.”

There are bright spots in Del Norte County. Amber Wier, program director at NorCal4Health, brought up the community’s Sister City relationship with Rikuzentakata, Japan. She told the story of Kamome, the 20-foot fishing vessel that washed ashore two years after the March 2011 tsunami, and the friendship that began with the community’s teens.