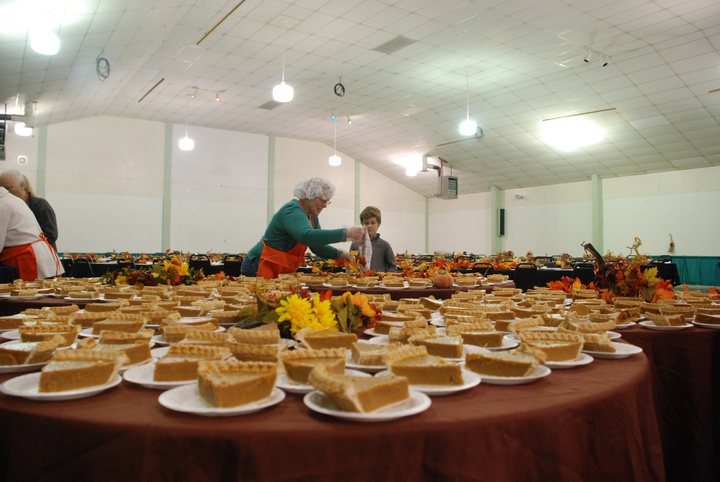 After a two-year hiatus due to the COVID-19 pandemic, Bodenstab, the pastor at Crescent City Foursquare Church, is planning to serve 800-1,000 meals next week. In addition to servers, volunteers are needed to clear tables, clean up spills and dump garbage, prepare the food and greet diners.

Bodenstab also invites volunteers to stay and enjoy a Thanksgiving meal with the community. The annual event will be held from noon-2 p.m. on Thursday at the Del Norte County Fairgrounds.

“The Community Thanksgiving Dinner is for people to really connect, not just have a meal and leave,” he said. “We have the mayor and judges and lawyers and doctors and the homeless and pastors all sitting down and eating together.”

Del Norte County’s Thanksgiving dinner began 29 years ago and was spearheaded for about 25 years by Teri Sandler, whose husband, Ron, owns Del Norte Ambulance. In 2017, Sandler decided to retire, handing the reins to Sutter Coast Hospital, which provided and cooked the food.

Volunteers can choose to work two shifts, which involves either setting up the dinner or cleaning up after it, Bodenstab said.
The food has been ordered in bulk from U.S. Foods. Volunteers will heat it up at Crescent Elk before transporting the food to the fairgrounds where it will be served. Those who want to help can stay in the kitchen either at the middle school or the fairgrounds, cut pie or serve drinks.

In addition to seeking volunteers, Crescent City Foursquare Church is also asking for monetary donations to help offset the cost of food. Even though the hospital received a discount from U.S. Foods, Bodenstab estimated the cost will be about $6,500.