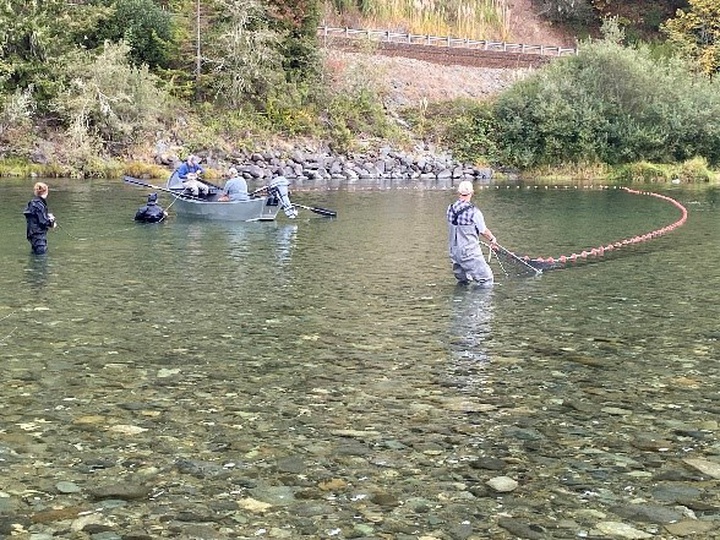 Staff at the Rowdy Creek Fish Hatchery and Tolowa Dee-ni’ Nation  is piloting a new program to collect broodstock chinook and steelhead from the Smith River.

The program includes working with local fishing guides, particularly where steelhead is concerned, and is an endeavor the tribe and hatchery hope to expand upon in the future.

“This year we will be working with one to two local fishing guides as volunteers, who will call when they catch a suitable broodstock steelhead so that staff can meet them to retrieve it and transport it back to the hatchery,” Erika Partee, resources specialist for the tribe’s fisheries division, told the Outpost. “This year will be more about working out the logistics for a small number of broodstock and then expanding in future years.”

Broodstock are adult fish collected from the wild and spawned in the hatchery, providing it with eggs scientists will hatch and rear for release back into the river, according to a Tolowa Dee-ni’ Nation news release. 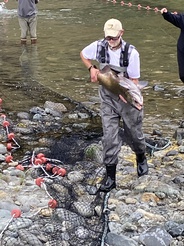 The Rowdy Creek Fish Hatchery were able to collect broodstock chinook and steelhead from the main stem of the Smith River for the first time this season. | Photo courtesy of the Tolowa Dee-ni' Nation

Hatchery staff collected chinook salmon broodstock on Oct. 21 and 28. Collection involves deploying a seine net from a boat near the river bank, stretching it across the channel and then downstream to encircle the fish. The net is pulled to shore by staff and the fish are removed, their species and sex identified and then checked for an adipose clip to determine if it’s wild or hatchery-born.

Unless they’re selected for hatchery broodstock, the fish are released back into the river, according to the news release.

Hatchery staff deployed the net near the water tower upstream from the Dr. Fine Bridge. Of the 207 chinook temporarily captured on Oct. 21, 16 will be used as broadstock for the fish hatchery.
On Oct. 28, hatchery staff selected 21 adults of 315 chinook captured at the same location for broodstock.

According to Partee, this is the first year hatchery staff have collected broodstock from the main stem of the Smith River.

“In the past, broodstock collection was limited to what fish returned to the trap at the Rowdy Creek Fish Hatchery weir,” she said. “Returns to the weir have been low for several years and low water levels later and later into the fall have compounded that. Collecting from the main stem when fish are present in large numbers allows us to collect fish earlier and select individuals ready to spawn.”

Hatchery staff have already spawned many of the fish collected from the main stem of the river, Partee said. In comparison, the hatchery got its first broodstock fish from the wier on Sunday.

“This new collection method also allows for more genetic diversity in the fish that the hatchery releases,” she said.

According to the tribe’s news release, using broodstock collected from the main stem produces fish whose genetic diversity is “more representative of the entire watershed.” It’s a similar technique the Oregon Department of Fish and Wildlife uses on the Chetco River.

The difference between the Rowdy Creek Fish Hatchery’s method currently is on the Chetco River, ODFW scientists work with guides who deliver wild-caught steelhead to live boxes in the river, Partee said. While that’s not something the hatchery is currently doing, it may be an option in the future, she said.

Created in 1968 by the Kiwanis Club of Smith River, the Rowdy Creek Fish Hatchery is a non-profit organization that relies on community funding to operate.

According to Partee, a fundraiser dinner and auction originally scheduled for Saturday has had to be postponed due to low ticket sales. The Hatchery will schedule another fundraiser this spring and is also considering an angler derby or a more informal dinner and auction.

The Rowdy Creek Fish Hatchery Board will meet to discuss its options, Partee said.